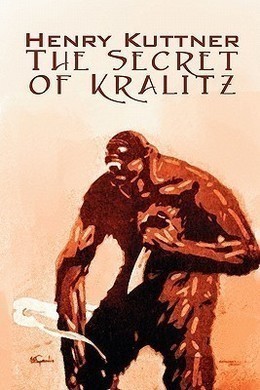 The Secret of Kralitz

A story of the shocking revelation that came to the twenty-first Baron Kralitz. Kuttner’s contribution to Lovecraft’s Cthulhu Mythos, a dark gothic tale, in which he introduces the lesser known diety; Iod.

I awoke from profound sleep to find two black-swathed forms standing silently beside me, their faces pale blurs in the gloom. As I blinked to clear my sleep-dimmed eyes, one of them beckoned impatiently, and suddenly I realized the purpose of this midnight summons. For years I had been expecting it, ever since my father, the Baron Kralitz, had revealed to me the secret and the curse that hung over our ancient house. And so, without a word, I rose and followed my guides as they led me along the gloomy corridors of the castle that had been my home since birth.

As I proceeded there rose up in my mind the stern face of my father, and in my ears rang his solemn words as he told me of the legendary curse of the House of Kralitz, the unknown secret that was imparted to the eldest son of each generation–at a certain time.

“When?” I had asked my father as he lay on his death-bed, fighting back the approach of dissolution.

“When you are able to understand,” he had told me, watching my face intently from beneath his tufted white brows. “Some are told the secret sooner than others. Since the first Baron Kralitz the secret has been handed down—-“

He clutched at his breast and paused. It was fully five minutes before he had gathered his strength to speak again in his rolling, powerful voice. No gasping, death-bed confessions for the Baron Kralitz!

He said at last, “You have seen the ruins of the old monastery near the village, Franz. The first Baron burnt it and put the monks to the sword. The Abbot interfered too often with the Baron’s whims. A girl sought shelter and the Abbot refused to give her up at the Baron’s demand. His patience was at an end–you know the tales they still tell about him.

“He slew the Abbot, burned the monastery, and took the girl. Before he died the Abbot cursed his slayer, and cursed his sons for unborn generations. And it is the nature of this curse that is the secret of our house.

“I may not tell you what the curse is. Do not seek to discover it before it is revealed to you. Wait patiently, and in due time you will be taken by the warders of the secret down the stairway to the underground cavern. And then you will learn the secret of Kralitz.”

As the last word passed my father’s lips he died, his stern face still set in its harsh lines.

Deep in my memories, I had not noticed our path, but now the dark forms of my guides paused beside a gap in the stone flagging, where a stairway which I had never seen during my wanderings about the castle led into subterranean depths. Down this stairway I was conducted, and presently I came to realize that there was light of a sort–a dim, phosphorescent radiance that came from no recognizable source, and seemed to be less actual light than the accustoming of my eyes to the near-darkness.

I went down for a long time. The stairway turned and twisted in the rock, and the bobbing forms ahead were my only relief from the monotony of the interminable descent. And at last, deep underground, the long stairway ended, and I gazed over the shoulders of my guides at the great door that barred my path. It was roughly chiseled from the solid stone, and upon it were curious and strangely disquieting carvings, symbols which I did not recognize. It swung open, and I passed through and paused, staring about me through a gray sea of mist.

I stood upon a gentle slope that fell away into the fog-hidden distance, from which came a pandemonium of muffled bellowing and high-pitched, shrill squeakings vaguely akin to obscene laughter. Dark, half-glimpsed shapes swam into sight through the haze and disappeared again, and great vague shadows swept overhead on silent wings. Almost beside me was a long rectangular table of stone, and at this table two score of men were seated, watching me from eyes that gleamed dully out of deep sockets. My two guides silently took their places among them.

And suddenly the thick fog began to lift. It was swept raggedly away on the breath of a chill wind. The far dim reaches of the cavern were revealed as the mist swiftly dissipated, and I stood silent in the grip of a mighty fear, and, strangely, an equally potent, unaccountable thrill of delight. A part of my mind seemed to ask, “What horror is this?” And another part whispered, “You know this place!”

But I could never have seen it before. If I had realized what lay far beneath the castle I could never have slept at night for the fear that would have obsessed me. For, standing silent with conflicting tides of horror and ecstasy racing through me, I saw the weird inhabitants of the underground world.