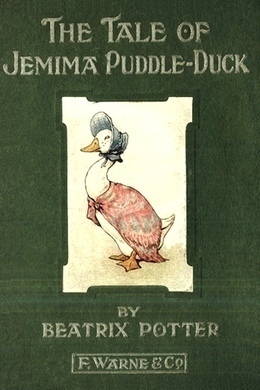 The Tale of Jemima Puddle-Duck

Looking for a quiet place to hide her eggs to hatch them herself, Jemima Puddle-duck encounters a gentleman fox who offers to host them at his home and organizes a party for the same evening to mark the event. Fortunately Kep, the farmer’s dog, understands the fox’s plan and saves Jemima and her eggs. Book illustrated with beautiful Potter’s watercolors.

What a funny sight it is to see a brood of ducklings with a hen!

–Listen to the story of Jemima Puddle-duck, who was annoyed because the farmer’s wife would not let her hatch her own eggs.

Her sister-in-law, Mrs. Rebeccah Puddle-duck, was perfectly willing to leave the hatching to some one else–“I have not the patience to sit on a nest for twenty-eight days; and no more have you, Jemima. You would let them go cold; you know you would!”

“I wish to hatch my own eggs; I will hatch them all by myself,” quacked Jemima Puddle-duck.

She tried to hide her eggs; but they were always found and carried off.

Jemima Puddle-duck became quite desperate. She determined to make a nest right away from the farm.

She set off on a fine spring afternoon along the cart-road that leads over the hill.

She was wearing a shawl and a poke bonnet.

When she reached the top of the hill, she saw a wood in the distance.

She thought that it looked a safe quiet spot.

Jemima Puddle-duck was not much in the habit of flying. She ran downhill a few yards flapping her shawl, and then she jumped off into the air.

She flew beautifully when she had got a good start.

She skimmed along over the tree-tops until she saw an open place in the middle of the wood, where the trees and brushwood had been cleared.

Jemima alighted rather heavily, and began to waddle about in search of a convenient dry nesting-place. She rather fancied a tree-stump amongst some tall fox-gloves.

But–seated upon the stump, she was startled to find an elegantly dressed gentleman reading a newspaper.

He had black prick ears and sandy coloured whiskers.

“Quack?” said Jemima Puddle-duck, with her head and her bonnet on one side–“Quack?”

“Madam, have you lost your way?” said he. He had a long bushy tail which he was sitting upon, as the stump was somewhat damp.

Jemima thought him mighty civil and handsome. She explained that she had not lost her way, but that she was trying to find a convenient dry nesting-place.

“Ah! is that so? indeed!” said the gentleman with sandy whiskers, looking curiously at Jemima. He folded up the newspaper, and put it in his coat-tail pocket.

Jemima complained of the superfluous hen.