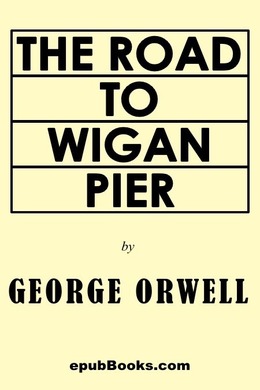 The Road to Wigan Pier

An unflinching look at unemployment and life among the working classes in Britain during the Great Depression, The Road to Wigan Pier offers an in-depth examination of socio-economic conditions in the coal-mining communities of England’s industrial areas, including detailed analysis of workers’ wages, living conditions, and working environments. Orwell was profoundly influenced by his experiences while researching The Road to Wigan Pier and the contrasts with his own comfortable middle-class upbringing; his reactions to working and living conditions and thoughts on how these would be improved under socialism are detailed in the second half of the book.

The first sound in the mornings was the clumping of the mill-girls’ clogs down the cobbled street. Earlier than that, I suppose, there were factory whistles which I was never awake to hear.

There were generally four of us in the bedroom, and a beastly place it was, with that defiled impermanent look of rooms that are not serving their rightful purpose. Years earlier the house had been an ordinary dwelling-house, and when the Brookers had taken it and fitted it out as a tripe-shop and lodging-house, they had inherited some of the more useless pieces of furniture and had never had the energy to remove them. We were therefore sleeping in what was still recognizably a drawing-room. Hanging from the ceiling there was a heavy glass chandelier on which the dust was so thick that it was like fur. And covering most of one wall there was a huge hideous piece of junk, something between a sideboard and a hall-stand, with lots of carving and little drawers and strips of looking-glass, and there was a once-gaudy carpet ringed by the slop-pails of years, and two gilt chairs with burst seats, and one of those old-fashioned horsehair armchairs which you slide off when you try to sit on them. The room had been turned into a bedroom by thrusting four squalid beds in among this other wreckage.

My bed was in the right-hand corner on the side nearest the door. There was another bed across the foot of it and jammed hard against it (it had to be in that position to allow the door to open) so that I had to sleep with my legs doubled up; if I straightened them out I kicked the occupant of the other bed in the small of the back. He was an elderly man named Mr Reilly, a mechanic of sorts and employed ‘on top’ at one of the coal pits. Luckily he had to go to work at five in the morning, so I could uncoil my legs and have a couple of hours’ proper sleep after he was gone. In the bed opposite there was a Scotch miner who had been injured in a pit accident (a huge chunk of stone pinned him to the ground and it was a couple of hours before they could lever it off), and had received five hundred pounds compensation. He was a big handsome man of forty, with grizzled hair and a clipped moustache, more like a sergeant-major than a miner, and he would lie in bed till late in the day, smoking a short pipe. The other bed was occupied by a succession of commercial travellers, newspaper-canvassers, and hire-purchase touts who generally stayed for a couple of nights. It was a double bed and much the best in the room. I had slept in it myself my first night there, but had been manoeuvred out of it to make room for another lodger. I believe all newcomers spent their first night in the double bed, which was used, so to speak, as bait. All the windows were kept tight shut, with a red sandbag jammed in the bottom, and in the morning the room stank like a ferret’s cage. You did not notice it when you got up, but if you went out of the room and came back, the smell hit you in the face with a smack.

I never discovered how many bedrooms the house contained, but strange to say there was a bathroom, dating from before the Brookers’ time. Downstairs there was the usual kitchen living-room with its huge open range burning night and day. It was lighted only by a skylight, for on one side of it was the shop and on the other the larder, which opened into some dark subterranean place where the tripe was stored. Partly blocking the door of the larder there was a shapeless sofa upon which Mrs Brooker, our landlady, lay permanently ill, festooned in grimy blankets. She had a big, pale yellow, anxious face. No one knew for certain what was the matter with her; I suspect that her only real trouble was over-eating. In front of the fire there was almost always a line of damp washing, and in the middle of the room was the big kitchen table at which the family and all the lodgers ate. I never saw this table completely uncovered, but I saw its various wrappings at different times. At the bottom there was a layer of old newspaper stained by Worcester Sauce; above that a sheet of sticky white oil-cloth; above that a green serge cloth; above that a coarse linen cloth, never changed and seldom taken off. Generally the crumbs from breakfast were still on the table at supper. I used to get to know individual crumbs by sight and watch their progress up and down the table from day to day.