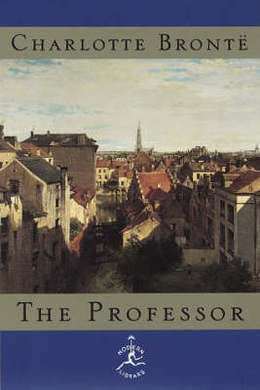 The hero of Charlotte Bronte’s first novel escapes a dreary clerkship in industrial Yorkshire by taking a job as a teacher in Belgium. There, however, his entanglement with the sensuous but manipulative Zoraide Reuter, complicates his affections for a penniless girl who is both teacher and pupil in Reuter’s school.

The other day, in looking over my papers, I found in my desk the following copy of a letter, sent by me a year since to an old school acquaintance:—

I think when you and I were at Eton together, we were neither of us what could be called popular characters: you were a sarcastic, observant, shrewd, cold–blooded creature; my own portrait I will not attempt to draw, but I cannot recollect that it was a strikingly attractive one—can you? What animal magnetism drew thee and me together I know not; certainly I never experienced anything of the Pylades and Orestes sentiment for you, and I have reason to believe that you, on your part, were equally free from all romantic regard to me. Still, out of school hours we walked and talked continually together; when the theme of conversation was our companions or our masters we understood each other, and when I recurred to some sentiment of affection, some vague love of an excellent or beautiful object, whether in animate or inanimate nature, your sardonic coldness did not move me. I felt myself superior to that check THEN as I do NOW.

It is a long time since I wrote to you, and a still longer time since I saw you. Chancing to take up a newspaper of your county the other day, my eye fell upon your name. I began to think of old times; to run over the events which have transpired since we separated; and I sat down and commenced this letter. What you have been doing I know not; but you shall hear, if you choose to listen, how the world has wagged with me.

First, after leaving Eton, I had an interview with my maternal uncles, Lord Tynedale and the Hon. John Seacombe. They asked me if I would enter the Church, and my uncle the nobleman offered me the living of Seacombe, which is in his gift, if I would; then my other uncle, Mr. Seacombe, hinted that when I became rector of Seacombe–cum–Scaife, I might perhaps be allowed to take, as mistress of my house and head of my parish, one of my six cousins, his daughters, all of whom I greatly dislike.

I declined both the Church and matrimony. A good clergyman is a good thing, but I should have made a very bad one. As to the wife—oh how like a night–mare is the thought of being bound for life to one of my cousins! No doubt they are accomplished and pretty; but not an accomplishment, not a charm of theirs, touches a chord in my bosom. To think of passing the winter evenings by the parlour fire–side of Seacombe Rectory alone with one of them—for instance, the large and well–modelled statue, Sarah—no; I should be a bad husband, under such circumstances, as well as a bad clergyman.

When I had declined my uncles’ offers they asked me ‘what I intended to do?’ I said I should reflect. They reminded me that I had no fortune, and no expectation of any, and, after a considerable pause, Lord Tynedale demanded sternly, ‘Whether I had thoughts of following my father’s steps and engaging in trade?’ Now, I had had no thoughts of the sort. I do not think that my turn of mind qualifies me to make a good tradesman; my taste, my ambition does not lie in that way; but such was the scorn expressed in Lord Tynedale’s countenance as he pronounced the word TRADE—such the contemptuous sarcasm of his tone—that I was instantly decided. My father was but a name to me, yet that name I did not like to hear mentioned with a sneer to my very face. I answered then, with haste and warmth, ‘I cannot do better than follow in my father’s steps; yes, I will be a tradesman.’ My uncles did not remonstrate; they and I parted with mutual disgust. In reviewing this transaction, I find that I was quite right to shake off the burden of Tynedale’s patronage, but a fool to offer my shoulders instantly for the reception of another burden—one which might be more intolerable, and which certainly was yet untried.

I wrote instantly to Edward—you know Edward—my only brother, ten years my senior, married to a rich mill–owner’s daughter, and now possessor of the mill and business which was my father’s before he failed. You are aware that my father—once reckoned a Croesus of wealth—became bankrupt a short time previous to his death, and that my mother lived in destitution for some six months after him, unhelped by her aristocratical brothers, whom she had mortally offended by her union with Crimsworth, the―shire manufacturer. At the end of the six months she brought me into the world, and then herself left it without, I should think, much regret, as it contained little hope or comfort for her.