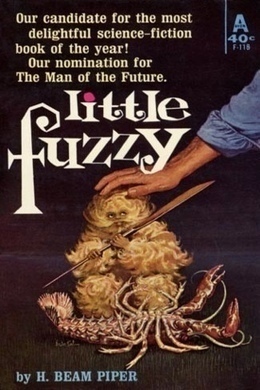 The planet Zarathustra is listed as uninhabited – which means that the entire planet can be owned by a corporation. That owner is the rich and happy Zarathustra Company – rich and happy, that is, until a prospector named Jack Holloway comes across undocumented species – a tiny, golden-furred little biped that he dubs ‘Little Fuzzy.’ Not only are the Little Fuzzies cute, they’re bright too – in fact, they may be sapient as people are … and that means everything the Zarathustra company owns on this world is at stake…

Jack Holloway found himself squinting, the orange sun full in his eyes. He raised a hand to push his hat forward, then lowered it to the controls to alter the pulse rate of the contragravity-field generators and lift the manipulator another hundred feet. For a moment he sat, puffing on the short pipe that had yellowed the corners of his white mustache, and looked down at the red rag tied to a bush against the rock face of the gorge five hundred yards away. He was smiling in anticipation.

“This’ll be a good one,” he told himself aloud, in the manner of men who have long been their own and only company. “I want to see this one go up.”

He always did. He could remember at least a thousand blast-shots he had fired back along the years and on more planets than he could name at the moment, including a few thermonuclears, but they were all different and they were always something to watch, even a little one like this. Flipping the switch, his thumb found the discharger button and sent out a radio impulse; the red rag vanished in an upsurge of smoke and dust that mounted out of the gorge and turned to copper when the sunlight touched it. The big manipulator, weightless on contragravity, rocked gently; falling debris pelted the trees and splashed in the little stream.

He waited till the machine stabilized, then glided it down to where he had ripped a gash in the cliff with the charge of cataclysmite. Good shot: brought down a lot of sandstone, cracked the vein of flint and hadn’t thrown it around too much. A lot of big slabs were loose. Extending the forward claw-arms, he pulled and tugged, and then used the underside grapples to pick up a chunk and drop it on the flat ground between the cliff and the stream. He dropped another chunk on it, breaking both of them, and then another and another, until he had all he could work over the rest of the day. Then he set down, got the toolbox and the long-handled contragravity lifter, and climbed to the ground where he opened the box, put on gloves and an eyescreen and got out a microray scanner and a vibrohammer.

The first chunk he cracked off had nothing in it; the scanner gave the uninterrupted pattern of homogenous structure. Picking it up with the lifter, he swung it and threw it into the stream. On the fifteenth chunk, he got an interruption pattern that told him that a sunstone–or something, probably something–was inside.

Some fifty million years ago, when the planet that had been called Zarathustra (for the last twenty-five million) was young, there had existed a marine life form, something like a jellyfish. As these died, they had sunk into the sea-bottom ooze; sand had covered the ooze and pressed it tighter and tighter, until it had become glassy flint, and the entombed jellyfish little beans of dense stone. Some of them, by some ancient biochemical quirk, were intensely thermofluorescent; worn as gems, they glowed from the wearer’s body heat.

On Terra or Baldur or Freya or Ishtar, a single cut of polished sunstone was worth a small fortune. Even here, they brought respectable prices from the Zarathustra Company’s gem buyers. Keeping his point of expectation safely low, he got a smaller vibrohammer from the toolbox and began chipping cautiously around the foreign object, until the flint split open and revealed a smooth yellow ellipsoid, half an inch long.

“Worth a thousand sols–if it’s worth anything,” he commented. A deft tap here, another there, and the yellow bean came loose from the flint. Picking it up, he rubbed it between gloved palms. “I don’t think it is.” He rubbed harder, then held it against the hot bowl of his pipe. It still didn’t respond. He dropped it. “Another jellyfish that didn’t live right.”

Behind him, something moved in the brush with a dry rustling. He dropped the loose glove from his right hand and turned, reaching toward his hip. Then he saw what had made the noise–a hard-shelled thing a foot in length, with twelve legs, long antennae and two pairs of clawed mandibles. He stopped and picked up a shard of flint, throwing it with an oath. Another damned infernal land-prawn.

He detested land-prawns. They were horrible things, which, of course, wasn’t their fault. More to the point, they were destructive. They got into things at camp; they would try to eat anything. They crawled into machinery, possibly finding the lubrication tasty, and caused jams. They cut into electric insulation. And they got into his bedding, and bit, or rather pinched, painfully. Nobody loved a land-prawn, not even another land-prawn.