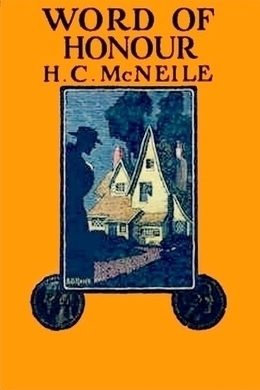 Sapper is not so good inking short stories as in a full-length novel; but he still shows many of his virtues. His style is conversational and easy, his plots are uninvolved, and everything goes with a swing. Of course, if the ‘reader pulls himself up and begins to think whether the stories are life-like, he will feel- rather dubious. Sapper accepts so many bluff and hearty conventions. A murder or so is no sin in the cause of love. A hero can do no wrong if we are informed beforehand that he is a good guy. The convention of which Sapper is fondest is that all bronzed and blue-eyed men should, be allowed to take the law into their own hands. And immediately we hear that a man’s jaw sets, we know that he is beyond good and evil. From a sociological point of view, this is dangerous doctrine; but who cares for anything but the story when he is reading Sapper?

Jimmy Staunton’s soldier servant smiled tolerantly behind a large hand as he produced the fourth evening collar for his master’s inspection. Three had already been hurled into a corner, with oaths and curses, as unfit for a chimney-sweep to wear, and he waited patiently for the verdict on the last.

“What do they do with ‘em, Wilton?” cried his master despairingly. “The blamed thing looks like a pleated skirt.”

His servant preserved a discreet silence as Staunton put it on; then he handed him a black tie. Few things are hidden from a man’s personal batman, and Wilton realised the solemnity of the occasion.

So much so, in fact, that when Jimmy, complete with overcoat and hat, was ready to leave his room, he permitted himself with a perfectly inscrutable face to say: “Good luck, sir.”

For a moment his master stared him; then a slow grin spread over his face.

But the door had already slammed behind the departing Jimmy. Should he, or should he not? That was the question. Point for: he loved her, and he felt tolerably sure that she rather more than liked him. Points against: he had exactly one hundred and fifty pounds a year beside his pay, and she couldn’t expect any more than that, even if she got as much, from her father. For Tiny Tim–the nickname by which the said father was known wherever soldiers were gathered together–was notoriously not blessed with an overflow of this world’s goods.

Tiny Tim–or, to be more formal, Lieut.-Col. John Mayhew, C.M.G., D.S.O. and bar, etc.–was Jimmy’s commanding officer. And Jimmy, in company with every other officer and man of the 1st battalion of the King’s Royal Loamshires, would have cheerfully lain down and let the Colonel walk over them, if it would have afforded him any pleasure. And the trifling fact that the men felt the same about Jimmy is beside the point. All that occupied the mind of that worthy as he strode towards the C.O.’s quarters was should he, or should he not? He knew there was no one else dining–Tiny Tim had told him so. He also knew that his host had some work to do after dinner which would take him about an hour. And as he stood on the door-step waiting for the servant to answer his ring, he admitted to himself the futility of his mental argument. If he had an hour alone with Peggy there wasn’t a hope.

She was alone when he went into the drawing-room, and his heart gave a quick bound forward as he saw her. What an utterly adorable girl she was; no wonder she was the apple of her father’s eye. Especially since her mother had died….

“Come back from leave at last, Peggy,” he said as he took her hand. “I’m thinking you’ve overstayed it badly.”

“Three months, Jimmy,” she answered. “And I’m off again the day after to-morrow.”

In spite of himself his face fell.

“The dickens you are!” he said. “We’ll have to get the C.O. to confine you to barracks.”

And then Tiny Tim came in, and they went in to dinner. It was an informal meal, such as the Colonel generally gave when he asked any of his unmarried officers in, and the conversation was of that intimate type–half shop, half sport, and wholly regiment–which seemed to come natural when Tiny Tim was present. Boring to an outsider perhaps, but there were no outsiders there. And it was when the fish was being cleared away that it struck Jimmy that the girl was unusually silent. At first he thought it must be his imagination, until he saw her father glance at her once or twice with a worried look in his eyes.

The port was put on the table, and after it had been round once Tiny Tim turned to her with a smile.

“Look here, Kitten,” he said, “you run along, will you? I want to talk to Staunton for a few minutes. Very confidential shop.”

Slightly surprised, Jimmy opened the door for her. What on earth could the C.O. want to say confidentially to him at such a time?

And when he’d sat down again and said, “Yes, sir,” politely, he got still more surprised. For Tiny Tim, who was usually the most direct of human beings, seemed to have considerable difficulty in beginning.

“What do you think of Peggy?” he blurted out suddenly. “Do you think she’s happy?”

Jimmy Staunton stared at him open-eyed.

“Good Lord, sir!” he stammered. “I–er–hope so. She seemed a bit silent at dinner.”

In silence Tiny Tim pushed the port towards him.

“Jimmy–I’m worried,” he said. “She’s all I’ve got, and–she’s changed. She’s been away, as you know–staying most of the time with a cousin of mine, Lady Badderley. I wanted her to have a good time and all that. I went and stopped there for a couple of weekends and, I dunno’, but it struck me there was a pretty putrid crowd in the house. I’m not particularly old-fashioned: I can stomach all sorts and conditions of men–and women; but I’m not Peggy. I don’t want her to get unsettled.”