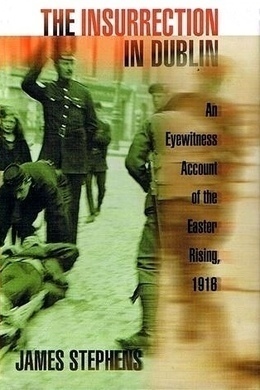 The Insurrection in Dublin

In the Land of Youth recounts the rivalry between the courtly Queen Meave and Eochaid, the earthy king. It is filled with scenes of ribaldry and revelry and acts as a prelude to Maeve’s war with the men of Ulster.

This has taken everyone by surprise. It is possible, that, with the exception of their Staff, it has taken the Volunteers themselves by surprise; but, to-day, our peaceful city is no longer peaceful; guns are sounding, or rolling and crackling from different directions, and, although rarely, the rattle of machine guns can be heard also.

Two days ago war seemed very far away–so far, that I have covenanted with myself to learn the alphabet of music. Tom Bodkin had promised to present me with a musical instrument called a dulcimer–I persist in thinking that this is a species of guitar, although I am assured that it is a number of small metal plates which are struck with sticks, and I confess that this description of its function prejudices me more than a little against it. There is no reason why I should think dubiously of such an instrument, but I do not relish the idea of procuring music with a stick. With this dulcimer I shall be able to tap out our Irish melodies when I am abroad, and transport myself to Ireland for a few minutes, or a few bars.

In preparation for this present I had through Saturday and Sunday been learning the notes of the Scale. The notes and spaces on the lines did not trouble me much, but those above and below the line seemed ingenious and complicated to a degree that frightened me.

On Saturday I got the Irish Times, and found in it a long article by Bernard Shaw (reprinted from the New York Times). One reads things written by Shaw. Why one does read them I do not know exactly, except that it is a habit we got into years ago, and we read an article by Shaw just as we put on our boots in the morning–that is, without thinking about it, and without any idea of reward.

His article angered me exceedingly. It was called “Irish Nonsense talked in Ireland.” It was written (as is almost all of his journalistic work) with that bonhomie which he has cultivated–it is his mannerism–and which is essentially hypocritical and untrue. Bonhomie! It is that man-of-the-world attitude, that shop attitude, that between-you-and-me-for-are-we-not-equal-and-cultured attitude, which is the tone of a card-sharper or a trick-of-the-loop man. That was the tone of Shaw’s article. I wrote an open letter to him which I sent to the New Age, because I doubted that the Dublin papers would print it if I sent it to them, and I knew that the Irish people who read the other papers had never heard of Shaw, except as a trade-mark under which very good Limerick bacon is sold, and that they would not be interested in the opinions of a person named Shaw on any subject not relevant to bacon. I struck out of my letter a good many harsh things which I said of him, and hoped he would reply to it in order that I could furnish these acidities to him in a second letter.

On Sunday I had to go to my office, as the Director was absent in London, and there I applied myself to the notes and spaces below the stave, but relinquished the exercise, convinced that these mysteries were unattainable by man, while the knowledge that above the stave there were others and not less complex, stayed mournfully with me.

I returned home, and as novels (perhaps it is only for the duration of the war) do not now interest me I read for some time in Madame Blavatsky’s “Secret Doctrine,” which book interests me profoundly. George Russell was out of town or I would have gone round to his house in the evening to tell him what I thought about Shaw, and to listen to his own much finer ideas on that as on every other subject. I went to bed.

On the morning following I awoke into full insurrection and bloody war, but I did not know anything about it. It was Bank Holiday, but for employments such as mine there are not any holidays, so I went to my office at the usual hour, and after transacting what business was necessary I bent myself to the notes above and below the stave, and marvelled anew at the ingenuity of man. Peace was in the building, and if any of the attendants had knowledge or rumour of war they did not mention it to me.

At one o’clock I went to lunch. Passing the corner of Merrion Row I saw two small groups of people. These people were regarding steadfastly in the direction of St. Stephen’s Green Park, and they spoke occasionally to one another with that detached confidence which proved they were mutually unknown. I also, but without approaching them, stared in the direction of the Green. I saw nothing but the narrow street which widened to the Park. Some few people were standing in tentative attitudes, and all looking in the one direction. As I turned from them homewards I received an impression of silence and expectation and excitement.