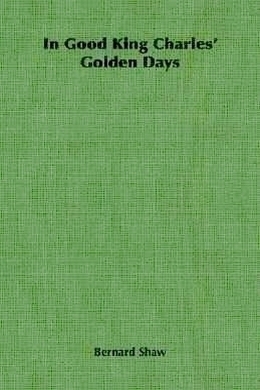 A True History that Never Happened

A wonderful restoration comedy written by the great George Bernard Shaw, the play is set as a discussion on the nature of power and wealth between King Charles II and Isaac Newton, George Fox and Godfrey Kneller. The kings three mistresses intervening along with his queen.

The library in the house of Isaac Newton in Cambridge in the year 1680. It is a cheerful room overlooking the garden from the first floor through a large window which has an iron balcony outside, with an iron staircase down to the garden level. The division of the window to the left as you look out through it is a glass door leading to these stairs, making the room accessible from the garden. Inside the room the walls are lined with cupboards below and bookshelves above. To the right of the window is a stand-up writing desk. The cupboards are further obstructed by six chairs ranged tidily along them, three to the right of the window and three to the left (as you look out). Between them a table belonging to the set of chairs stands out in the middle with writing materials on it and a prodigious open Bible, made for a church lectern. A comfortable chair for the reader faces away from the window. On the reader’s left is a handsome armchair, apparently for the accommodation of distinguished visitors to the philosopher.

Newton’s housekeeper, a middle aged woman of very respectable appearance, is standing at the desk working at her accounts.

A serving maid in morning deshabille comes in through the interior door, which is in the side wall to the left of the window (again as you look out through it).

THE MAID. Please, Mrs Basham, a Mr Rowley wants to know when the master will be at home to receive him.

MRS BASHAM. Rowley? I dont know him. This is no hour to call on Mr Newton.

THE MAID. No indeed, maam. And look at me! not dressed to open the door to gentlefolk.

MRS BASHAM. Is he a gentleman? Rowley is not much of a name.

THE MAID. Dressed like a nobleman, maam. Very tall and very dark. And a lot of dogs with him, and a lackey. Not a person you could shut the door in the face of, maam. But very condescending, I must say.

MRS BASHAM. Well, tell him to come back at half past eleven; but I can’t promise that Mr Newton will be in. Still, if he likes to come on the chance. And without his dogs, mind. Our Diamond would fight with them.

MRS BASHAM. Oh, Sally, can you tell me how much is three times seven. You were at school, werent you?

SALLY. Yes, maam; but they taught the boys to read, write, and cipher. Us girls were only taught to sew.

MRS BASHAM. Well, never mind. I will ask Mr Newton. He’ll know, if anybody will. Or stop. Ask Jack the fish hawker. He’s paunching the rabbit in the kitchen.

MRS BASHAM. Three sixpences make one and sixpence and three eightpences make two shillings: they always do. But three sevenpences! I give it up.

SALLY. No, maam. He wears leather clothes. Quite out of the common.

MRS BASHAM. Did he give his name?

MRS BASHAM. Why, thats the Quaker, the Man in Leather Breeches. He’s been in prison. How dare he come here wanting to see Mr Newton? Go and tell him that Mr Newton is not at home to the like of him.

SALLY. Oh, he’s not a person I could talk to like that, maam. I dursnt.

MRS BASHAM. Are you frightened of a man that would call a church a steeple house and walk into it without taking off his hat? Go this instant and tell him you will raise the street against him if he doesn’t go away. Do you hear. Go and do as I tell you.

SALLY. I’d be afraid he’d raise the street against us. I will do my best to get rid of him without offence. [She goes].

MRS BASHAM [calling after her] And mind you ask Jack how much three times seven is.

Newton, aged 38, comes in from the garden, hatless, deep in calculation, his fists clenched, tapping his knuckles together to tick off the stages of the equation. He stumbles over the mat.

MRS BASHAM. Oh, do look where youre going, Mr Newton. Someday youll walk into the river and drown yourself. I thought you were out at the university.

NEWTON. Now dont scold, Mrs Basham, dont scold. I forgot to go out. I thought of a way of making a calculation that has been puzzling me.

MRS BASHAM. And you have been sitting out there forgetting everything else since breakfast. However, since you have one of your calculating fits on I wonder would you mind doing a little sum for me to check the washing bill. How much is three times seven?

NEWTON. Three times seven? Oh, that is quite easy.