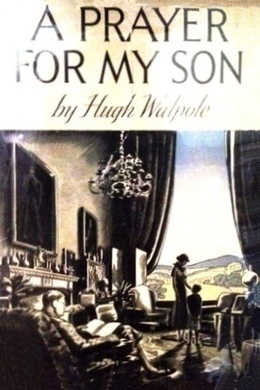 A Prayer for my Son

My homeward course led up a long ascent, Where the road’s watery surface, to the top Of that sharp rising, glittered to the moon And bore the semblance of another stream Stealing with silent lapse to join the brook That murmured in the vale. All else was still: No living thing appeared in earth or air, And, save the flowing water’s peaceful voice, Sound there was none–but lo! an uncouth shape…

This moment of anticipation was the worst of her life–never before had she been so utterly alone.

Her loneliness now was emphasized by the strange dead-white glow that seemed to bathe her room. She had just switched off the electric light, and the curtains were not drawn upon the long gaunt windows. Although it was after five on that winter afternoon, the light of the snow still illuminated the scene. Beyond the windows a broad field ran slowly up to a thin bare hedge; above the hedge, the fell, thick in snow, mounted to a grey sky which lay like one shadow upon another against the lower flanks of Blencathra.

Rose had learnt the name of this mountain from the first instant of her arrival at the Keswick station. She had not known whether she would be met or not, and she had asked a porter whether he knew of Scarfe Hall. He knew of it well enough. It lay near the Sanatorium right under Saddleback. And then, because she was obviously a stranger, and he unlike many of his countrymen was loquacious, he explained to her that Saddleback was the common name for Blencathra. ‘What a pity,’ she murmured. ‘Blencathra is much finer.’ But he was not interested in that. He found the motor-car from the Hall and soon she was moving downhill from the station, turning sharply to the left by the river, and so to her destination.

She had had tea alone with Janet Fawcus in the drawing-room downstairs; such a strange, old-fashioned, overcrowded room, with photographs in silver frames and a large oil painting over the marble fireplace of Humphrey’s father. So odd, Rose thought, to have so large a painting of yourself so prominently displayed. She had seen before, of course, photographs of Humphrey’s father and had always liked the kindliness, the good-humour in his round chubby face, the beautiful purity of his white hair, his broad manly shoulders, but this oil painting, made obviously a number of years ago, gave him a kind of dignified splendour. She had always thought him like Mr. Pickwick, but now he was a Mr. Pickwick raised to a degree of authority that yet had not robbed him of his geniality.

So she and Janet Fawcus had shared an embarrassed tea. It was no surprise to her to discover in Janet the perfect spinster–that is, a woman of middle age whose certainty that virginity is a triumph is mingled with an everlasting disappointment. Janet was dressed in the hard and serviceable tweeds of the English dweller in the country. She talked to Rose with all the kindliness of a hostess and the patronage of a successful headmistress. Rose saw at once that Janet had always hated her and that meeting her had not weakened that emotion.