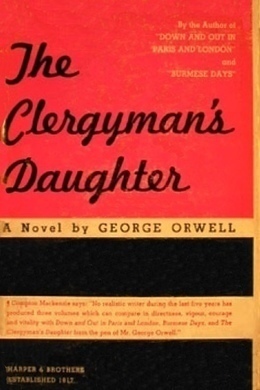 Intimidated by her father, the rector of Knype Hill, Dorothy performs her submissive roles of dutiful daughter and bullied housekeeper. Her thoughts are taken up with the costumes she is making for the church school play, by the hopelessness of preaching to the poor and by debts she cannot pay in 1930s Depression England. Suddenly her routine shatters and Dorothy finds herself down and out in London. She is wearing silk stockings, has money in her pocket and cannot remember her name. Orwell leads us through a landscape of unemployment, poverty and hunger, where Dorothy’s faith is challenged by a social reality that changes her life.

As the alarm clock on the chest of drawers exploded like a horrid little bomb of bell metal, Dorothy, wrenched from the depths of some complex, troubling dream, awoke with a start and lay on her back looking into the darkness in extreme exhaustion.

The alarm clock continued its nagging, feminine clamour, which would go on for five minutes or thereabouts if you did not stop it. Dorothy was aching from head to foot, and an insidious and contemptible self-pity, which usually seized upon her when it was time to get up in the morning, caused her to bury her head under the bedclothes and try to shut the hateful noise out of her ears. She struggled against her fatigue, however, and, according to her custom, exhorted herself sharply in the second person plural. Come on, Dorothy, up you get! No snoozing, please! Proverbs vi, 9. Then she remembered that if the noise went on any longer it would wake her father, and with a hurried movement she bounded out of bed, seized the clock from the chest of drawers, and turned off the alarm. It was kept on the chest of drawers precisely in order that she should have to get out of bed to silence it. Still in darkness, she knelt down at her bedside and repeated the Lord’s Prayer, but rather distractedly, her feet being troubled by the cold.

It was just half past five, and coldish for an August morning. Dorothy (her name was Dorothy Hare, and she was the only child of the Reverend Charles Hare, Rector of St Athelstan’s, Knype Hill, Suffolk) put on her aged flannelette dressing-gown and felt her way downstairs. There was a chill morning smell of dust, damp plaster, and the fried dabs from yesterday’s supper, and from either side of the passage on the second floor she could hear the antiphonal snoring of her father and of Ellen, the maid of all work. With care–for the kitchen table had a nasty trick of reaching out of the darkness and banging you on the hip-bone–Dorothy felt her way into the kitchen, lighted the candle on the mantelpiece, and, still aching with fatigue, knelt down and raked the ashes out of the range.

The kitchen fire was a ‘beast’ to light. The chimney was crooked and therefore perpetually half choked, and the fire, before it would light, expected to be dosed with a cupful of kerosene, like a drunkard’s morning nip of gin. Having set the kettle to boil for her father’s shaving-water, Dorothy went upstairs and turned on her bath. Ellen was still snoring, with heavy youthful snores. She was a good hard-working servant once she was awake, but she was one of those girls whom the Devil and all his angels cannot get out of bed before seven in the morning.

Dorothy filled the bath as slowly as possible–the splashing always woke her father if she turned on the tap too fast–and stood for a moment regarding the pale, unappetizing pool of water. Her body had gone goose-flesh all over. She detested cold baths; it was for that very reason that she made it a rule to take all her baths cold from April to November. Putting a tentative hand into the water– and it was horribly cold–she drove herself forward with her usual exhortations. Come on, Dorothy! In you go! No funking, please! Then she stepped resolutely into the bath, sat down and let the icy girdle of water slide up her body and immerse her all except her hair, which she had twisted up behind her head. The next moment she came to the surface gasping and wriggling, and had no sooner got her breath back than she remembered her ‘memo list’, which she had brought down in her dressing-gown pocket and intended to read. She reached out for it, and, leaning over the side of the bath, waist deep in icy water, read through the ‘memo list’ by the light of the candle on the chair.