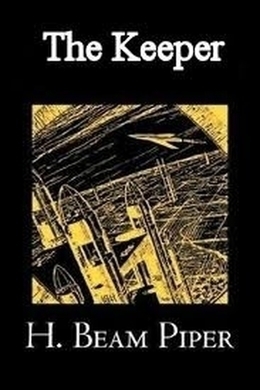 Evil men had stolen his treasure, and Raud set out with his deer rifle and his great dog Brave to catch the thieves before they could reach the Starfolk. That the men had negatron pistols meant little–Raud was the Keeper… The old men speak of a time many years ago when hundreds of starships were visible in the night-time sky, but now the world is old, poor and forgotten. Raud the Keeper is surprised one day when a local man named Vahr Farg’s son brings two men from another world to his home. It seems that the men are scholars who have heard of the great crown that Raud is charged with keeping, and they wish to see it.

When he heard the deer crashing through brush and scuffling the dead leaves, he stopped and stood motionless in the path. He watched them bolt down the slope from the right and cross in front of him, wishing he had the rifle, and when the last white tail vanished in the gray-brown woods he drove the spike of the ice-staff into the stiffening ground and took both hands to shift the weight of the pack. If he’d had the rifle, he could have shot only one of them. As it was, they were unfrightened, and he knew where to find them in the morning.

Ahead, to the west and north, low clouds massed; the white front of the Ice-Father loomed clear and sharp between them and the blue of the distant forests. It would snow, tonight. If it stopped at daybreak, he would have good tracking, and in any case, it would be easier to get the carcasses home over snow. He wrenched loose the ice-staff and started forward again, following the path that wound between and among and over the irregular mounds and hillocks. It was still an hour’s walk to Keeper’s House, and the daylight was fading rapidly.

Sometimes, when he was not so weary and in so much haste, he would loiter here, wondering about the ancient buildings and the long-vanished people who had raised them. There had been no woods at all, then; nothing but great houses like mountains, piling up toward the sky, and the valley where he meant to hunt tomorrow had been an arm of the sea that was now a three days’ foot-journey away. Some said that the cities had been destroyed and the people killed in wars–big wars, not squabbles like the fights between sealing-companies from different villages. He didn’t think so, himself. It was more likely that they had all left their homes and gone away in starships when the Ice-Father had been born and started pushing down out of the north. There had been many starships, then. When he had been a boy, the old men had talked about a long-ago time when there had been hundreds of them visible in the sky, every morning and evening. But that had been long ago indeed. Starships came but seldom to this world, now. This world was old and lonely and poor. Like poor lonely old Raud the Keeper.

He felt angry to find himself thinking like that. Never pity yourself, Raud; be proud. That was what his father had always taught him: “Be proud, for you are the Keeper’s son, and when I am gone, you will be the Keeper after me. But in your pride, be humble, for what you will keep is the Crown.”

The thought of the Crown, never entirely absent from his mind, wakened the anxiety that always slept lightly if at all. He had been away all day, and there were so many things that could happen. The path seemed longer, after that; the landmarks farther apart. Finally, he came out on the edge of the steep bank, and looked down across the brook to the familiar low windowless walls and sharp-ridged roof of Keeper’s House; and when he came, at last, to the door, and pulled the latchstring, he heard the dogs inside–the soft, coughing bark of Brave, and the anxious little whimper of Bold–and he knew that there was nothing wrong in Keeper’s House.

The room inside was lighted by a fist-sized chunk of lumicon, hung in a net bag of thongs from the rafter over the table. It was old–cast off by some rich Southron as past its best brilliance, it had been old when he had bought it from Yorn Nazvik the Trader, and that had been years ago. Now its light was as dim and yellow as firelight. He’d have to replace it soon, but this trip he had needed new cartridges for the big rifle. A man could live in darkness more easily than he could live without cartridges.

The big black dogs were rising from their bed of deerskins on the stone slab that covered the crypt in the far corner. They did not come to meet him, but stayed in their place of trust, greeting him with anxious, eager little sounds.

They recognized that word, and whined. He hung up the ice-staff on the pegs by the door, then squatted and got his arms out of the pack-straps.

“Just a little now; wait a little,” he told the dogs. “Keeper’ll get something for you.”

He unhooked the net bag that held the lumicon and went to the ladder, climbing to the loft between the stone ceiling and the steep snow-shed roof; he cut down two big chunks of smoked wild-ox beef–the dogs liked that better than smoked venison–and climbed down.