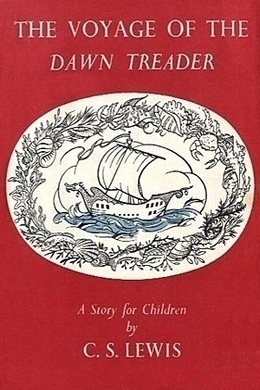 The Voyage of the Dawn Treader

Lucy and Edmund, with their dreadful cousin Eustace, get magically pulled into a painting of a ship at sea. That ship is the Dawn Treader, and on board is Caspian, King of Narnia. He and his companions, including Reepicheep, the valiant warrior mouse, are searching for seven lost lords of Narnia, and their voyage will take them to the edge of the world. Their adventures include being captured by slave traders, a much-too-close encounter with a dragon, and visits to many enchanted islands, including the place where dreams come true.

There was a boy called Eustace Clarence Scrubb, and he almost deserved it. His parents called him Eustace Clarence and masters called him Scrubb. I can’t tell you how his friends spoke to him, for he had none. He didn’t call his Father and Mother “Father” and “Mother”, but Harold and Alberta. They were very up-to-date and advanced people. They were vegetarians, non-smokers and teetotallers and wore a special kind of underclothes. In their house there was very little furniture and very few clothes on the beds and the windows were always open.

Eustace Clarence liked animals, especially beetles, if they were dead and pinned on a card. He liked books if they were books of information and had pictures of grain elevators or of fat foreign children doing exercises in model schools.

Eustace Clarence disliked his cousins the four Pevensies, Peter, Susan, Edmund and Lucy. But he was quite glad when he heard that Edmund and Lucy were coming to stay. For deep down inside him he liked bossing and bullying; and, though he was a puny little person who couldn’t have stood up even to Lucy, let alone Edmund, in a fight, he knew that there are dozens of ways to give people a bad time if you are in your own home and they are only visitors.

Edmund and Lucy did not at all want to come and stay with Uncle Harold and Aunt Alberta. But it really couldn’t be helped. Father had got a job lecturing in America for sixteen weeks that summer, and Mother was to go with him because she hadn’t had a real holiday for ten years. Peter was working very hard for an exam and he was to spend the holidays being coached by old Professor Kirke in whose house these four children had had wonderful adventures long ago in the war years. If he had still been in that house he would have had them all to stay. But he had somehow become poor since the old days and was living in a small cottage with only one bedroom to spare. It would have cost too much money to take the other three all to America, and Susan had gone. Grown-ups thought her the pretty one of the family and she was no good at school work (though otherwise very old for her age) and Mother said she “would get far more out of a trip to America than the youngsters”. Edmund and Lucy tried not to grudge Susan her luck, but it was dreadful having to spend the summer holidays at their Aunt’s. “But it’s far worse for me,” said Edmund, “because you’ll at least have a room of your own and I shall have to share a bedroom with that record stinker, Eustace.”

The story begins on an afternoon when Edmund and Lucy were stealing a few precious minutes alone together. And of course they were talking about Narnia, which was the name of their own private and secret country. Most of us, I suppose, have a secret country but for most of us it is only an imaginary country. Edmund and Lucy were luckier than other people in that respect. Their secret country was real. They had already visited it twice; not in a game or a dream, but in reality. They had got there of course by Magic, which is the only way of getting to Narnia. And a promise, or very nearly a promise, had been made them in Narnia itself that they would some day get back. You may imagine that they talked about it a good deal, when they got the chance.

They were in Lucy’s room, sitting on the edge of her bed and looking at a picture on the opposite wall. It was the only picture in the house that they liked. Aunt Alberta didn’t like it at all (that was why it was put away in a little back room upstairs), but she couldn’t get rid of it because it had been a wedding present from someone she did not want to offend.

It was a picture of a ship–a ship sailing nearly straight towards you. Her prow was gilded and shaped like the head of a dragon with wide open mouth. She had only one mast and one large, square sail which was a rich purple. The sides of the ship–what you could see of them where the gilded wings of the dragon ended–were green. She had just run up to the top of one glorious blue wave, and the nearer slope of that wave came down towards you, with streaks and bubbles on it. She was obviously running fast before a gay wind, listing over a little on her port side. (By the way, if you are going to read this story at all, and if you don’t know already, you had better get it into your head that the left of a ship when you are looking ahead, is port, and the right is starboard.) All the sunlight fell on her from that side, and the water on that side was full of greens and purples. On the other, it was darker blue from the shadow of the ship.

“The question is,” said Edmund, “whether it doesn’t make things worse, looking at a Narnian ship when you can’t get there.”

“Even looking is better than nothing,” said Lucy. “And she is such a very Narnian ship.”