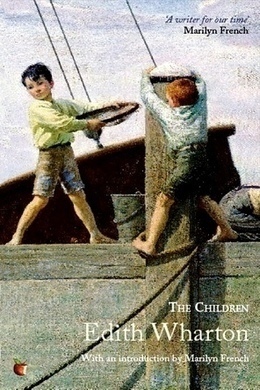 A bestseller when it was first published, The Children is a comic, bittersweet novel about the misadventures of a bachelor and a band of precocious children. The seven Wheater children, stepbrothers and stepsisters grown weary of being shuttled from parent to parent are eager for their parents’ latest reconciliation to last. A chance meeting between the children and the solitary 46-year old Martin Boyne leads to a series of unforgettable encounters.

As the big liner hung over the tugs swarming about her in the bay of Algiers, Martin Boyne looked down from the promenade deck on the troop of first-class passengers struggling up the gangway, their faces all unconsciously lifted to his inspection.

“Not a soul I shall want to speak to–as usual!”

Some men’s luck in travelling was inconceivable. They had only to get into a train or on board a boat to run across an old friend; or, what was more exciting, make a new one. They were always finding themselves in the same compartment, or in the same cabin, with some wandering celebrity, with the owner of a famous house, of a noted collection, or of an odd and amusing personality–the latter case being, of course, the rarest as it was the most rewarding.

There was, for instance, Martin Boyne’s own Great-Uncle Edward. Uncle Edward’s travel-adventures were famed in the family. At home in America, amid the solemn upholstery of his Boston house, Uncle Edward was the model of complacent dulness; yet whenever he got on board a steamer, or into a train (or a diligence, in his distant youth), he was singled out by fate as the hero of some delightful encounter. It would be Rachel during her ill-starred tour of the States; Ruskin on the lake of Geneva; the Dean of Canterbury as Uncle Edward, with all the appropriate emotions, was gazing on the tomb of the Black Prince; or the Duke of Devonshire of his day, as Uncle Edward put a courteous (but probably pointless) question to the housekeeper showing him over Chatsworth. And instantly he would receive a proscenium box from Rachel for her legendary first night in Boston, or be entreated by Ruskin to join him for a month in Venice; or the Dean would invite him to stay at the Deanery, the Duke at Chatsworth; and the net result of these experiences would be that Uncle Edward, if questioned, would reply with his sweet frosty smile: “Yes, Rachel had talent but no beauty”; or: “No one could be more simple and friendly than the Duke”; or: “Ruskin really had all the appearances of a gentleman.” Such were the impressions produced on Uncle Edward by his unparalleled success in the great social scenes through which, for a period of over sixty years, he moved with benignant blindness.

Far different was the case of his great-nephew. No tremor of thought or emotion would, in similar situations, have escaped Martin Boyne: he would have burst all the grapes against his palate. But though he was given to travel, and though he had travelled much, and his profession as a civil engineer had taken him to interesting and out-of-the-way parts of the world, and though he was always on the alert for agreeable encounters, it was never at such times that they came to him. He would have loved adventure, but adventure worthy of the name perpetually eluded him; and when it has eluded a man till he is over forty it is not likely to seek him out later.

“I believe it’s something about the shape of my nose,” he had said to himself that very morning as he shaved in his spacious cabin on the upper deck of the big Mediterranean cruising-steamer.

The nose in question was undoubtedly not adventurous in shape; it did not thrust itself far forward into other people’s affairs; and the eyes above, wide apart, deep-set, and narrowed for closer observation, were of a guarded twilight gray which gave the nose no encouragement whatever.

“Nobody worth bothering about–AS USUAL,” he grumbled. For the day was so lovely, the harbour of Algiers so glittering with light and heat, his own mood so full of holiday enterprise–it was his first vacation after a good many months on a hard exhausting job–that he could hardly believe he really looked to the rest of the world as he had seen himself that morning: a critical cautious man of forty- six, whom nobody could possibly associate with the romantic or the unexpected.

“Usual luck; best I can hope for is to keep my cabin to myself for the rest of the cruise,” he pondered philosophically, hugging himself at the prospect of another fortnight of sea-solitude before– well, before the fateful uncertainty of what awaited him just beyond the voyage…

“And I haven’t even SEEN her for five years!” he reflected, with that feeling of hollowness about the belt which prolonged apprehension gives.

Passengers were still climbing the ship’s side, and he leaned and looked again, this time with contracted eyes and a slight widening of his cautious nostrils. His attention had been drawn to a young woman–a slip of a girl, rather–with a round flushed baby on her shoulder, a baby much too heavy for her slender frame, but on whose sleepy countenance her own was bent with a gaze of solicitude which wrung a murmur of admiration from Boyne.

“Jove–if a fellow was younger!”