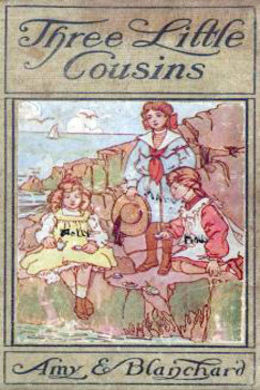 Already the train was slowing up and in a few moments Molly was standing tiptoe, looking eagerly along the line of cars. Then she watched each person who descended the steps till at last she was rewarded by the sight of a tall young man who lifted down a little girl about Molly’s age, a fair-haired, rosy-cheeked little girl, prettily dressed, and in no way suggesting a wild Indian. The instant Molly saw her, she was seized with a fit of shyness and could not follow her first impulse to rush forward. Instead she waited where she was till the two came up.

It had stopped raining; Molly made quite sure of it by looking into the little puddles upon the walk. At first she thought there were drops still falling upon them, but it was only the wind which ruffled the surface. The green grass was misty with rain and upon the bushes the shining drops hung from every twig. Presently a sudden burst of sunshine broke through the clouds and changed the drops to sparkles of light. “There!” exclaimed Molly, “I see a piece of blue sky. Now I may go, mayn’t I, mother? It is clearing off.”

Mrs. Shelton came to the window and Molly with serious face watched her scan the sky. “It really is brighter,” Mrs. Shelton decided. “Yes, I see a piece of blue big enough for a Dutchman’s breeches so I think the rain is over, but you’d better put on your rubbers, Molly.”

Molly scarcely waited to hear but danced out of the room and down the steps. “Don’t forget your rubbers!” her mother called after her, and Molly scurried to the closet under the stairs, grabbed the rubbers, snatched up her hat and was out of the door in a twinkling. Steadying herself on one foot, she drew on the overshoes, for there was no time to sit down; she could hear the whistle of the cars in the distance and knew there was barely time to reach the station before the train would stop.

It was an important occasion, for would not the express bring Molly’s Cousin Polly whom she had always longed to meet? And not only Polly was coming but their Uncle Dick who was bringing Polly all the way from Colorado to the east. Uncle Dick was not so much of a novelty as Polly, but he was quite as ardently expected, for he was the jolliest fellow in the world, Molly thought, and, though he teased her unmercifully, he was full of jokes and funny quips and amusing anecdotes, besides being generous in the extreme and always ready to put himself out to do a kind turn. As for Polly, Molly had many conjectures concerning her. What sort of girl would she be who had always lived on a ranch far away from the rest of the world; a girl who had never been to school and only a few times to church, who had never seen a big city, nor an automobile, nor even a trolley car? Would she be very wild indeed, whooping like a savage Indian and eating with her knife like an untutored woodsman? Would Molly be ashamed to have her friends meet her? These questions, to which the answer was so near, Molly asked herself for the hundredth time as she walked toward the station.

Already the train was slowing up and in a few moments Molly was standing tiptoe, looking eagerly along the line of cars. Then she watched each person who descended the steps till at last she was rewarded by the sight of a tall young man who lifted down a little girl about Molly’s age, a fair–haired, rosy–cheeked little girl, prettily dressed, and in no way suggesting a wild Indian. The instant Molly saw her, she was seized with a fit of shyness and could not follow her first impulse to rush forward. Instead she waited where she was till the two came up.

“Hello!” cried Uncle Dick. “I expected you would come at least to the next station to meet us, and here you are backing away instead.”

Feeling that Polly might think that she really did not show the eagerness to see her that she ought to expect, Molly put out her hand but was presently seized in Polly’s fervent hug. “Oh, but I am glad to see you,” she said. “I could scarcely wait to get here, could I, Uncle Dick? It’s such a long way and to–day was the longest one of all.”

“I’ve been just crazy to see you, too,” returned Molly. “I was so afraid it would rain hard and mother would not let me come to meet you. Where’s Uncle Dick going? Oh, I see; he is looking after your baggage. Don’t you hate sleeping–cars, and didn’t it seem funny to have no one but Uncle Dick all these days?”

“No one but Uncle Dick; I like that,” said that gentleman rejoining them. “Are you going to have me called a nobody at the very outset, Polly?”

“Oh, yes you did; you said it when you thought my back was turned,” interrupted her uncle.

Polly began to pound him with her fist. “Quit your nonsense, you great big, long–legged, old tease,” she said. “You know that wasn’t what Molly meant. You aren’t a bit nice to her; you began to tease her the very minute you set eyes on her. You’d better be pretty good to her or I won’t let you take me home again; so there, sir.”

Uncle Dick gave her a playful shake. “You’ll be homesick enough in a week from now to go home by yourself,” he warned her.

“She’ll do no such thing,” cried Molly, gathering courage from Polly’s example. “She’ll just love it here, I know. Come along, Polly; we’ll get home first.”