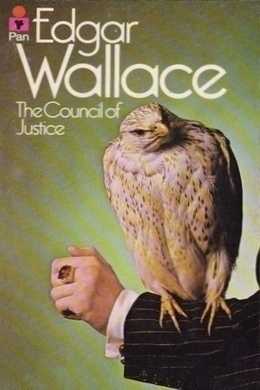 The Council of Justice

In their second explosive adventure, the Four Just Men must sacrifice one of their own. There are crimes for which no punishment is adequate, offences that the written law cannot efface. This is the justification for the Council of Justice—a meeting of great and passionless intellects. These men are indifferent to world opinion. They relentlessly wage their wits and cunning against powerful underworld organizations, against past masters of villainy, and against minds equally astute. To breakers of the unwritten laws, they deal death.

It is not for you or me to judge Manfred and his works. I say ‘Manfred’, though I might as well have said ‘Gonsalez’, or for the matter of that ‘Poiccart’, since they are equally guilty or great according to the light in which you view their acts. The most lawless of us would hesitate to defend them, but the greater humanitarian could scarcely condemn them.

From the standpoint of us, who live within the law, going about our business in conformity with the code, and unquestioningly keeping to the left or to the right as the police direct, their methods were terrible, indefensible, revolting.

It does not greatly affect the issue that, for want of a better word, we call them criminals. Such would be mankind’s unanimous designation, but I think–indeed, I know–that they were indifferent to the opinions of the human race. I doubt very much whether they expected posterity to honour them.

Their action towards the cabinet minister was murder, pure and simple. Yet, in view of the large humanitarian problems involved, who would describe it as pernicious?

Frankly I say of the three men who killed Sir Philip Ramon, and who slew ruthlessly in the name of Justice, that my sympathies are with them. There are crimes for which there is no adequate punishment, and offences that the machinery of the written law cannot efface. Therein lies the justification for the Four Just Men,–the Council of Justice as they presently came to call themselves a council of great intellects, passionless.

And not long after the death of Sir Philip and while England still rang with that exploit, they performed an act or a series of acts that won not alone from the Government of Great Britain, but from the Governments of Europe, a sort of unofficial approval and Falmouth had his wish. For here they waged war against great world-criminals–they pitted their strength, their cunning, and their wonderful intellects against the most powerful organization of the underworld-against past masters of villainous arts, and brains equally agile.

It was the day of days for the Red Hundred. The wonderful inter-national congress was meeting in London, the first great congress of recognized Anarchism. This was no hole-and-corner gathering of hurried men speaking furtively, but one open and unafraid with three policemen specially retained for duty outside the hall, a commissionaire to take tickets at the outer lobby, and a shorthand writer with a knowledge of French and Yiddish to make notes of remarkable utterances.

The wonderful congress was a fact. When it had been broached there were people who laughed at the idea; Niloff of Vitebsk was one because he did not think such openness possible. But little Peter (his preposterous name was Konoplanikova, and he was a reporter on the staff of the foolish Russkoye Znamza), this little Peter who had thought out the whole thing, whose idea it was to gather a conference of the Red Hundred in London, who hired the hall and issued the bills (bearing in the top left-hand corner the inverted triangle of the Hundred) asking those Russians in London interested in the building of a Russian Sailors’ Home to apply for tickets, who, too, secured a hall where interruption was impossible, was happy–yea, little brothers, it was a great day for Peter.

‘You can always deceive the police,’ said little Peter enthusiastically; ‘call a meeting with a philanthropic object and–voila!’

Wrote Inspector Falmouth to the assistant commissioner of police:–

Your respected communication to hand. The meeting to be held tonight at the Phoenix Hall, Middlesex Street, E., with the object of raising funds for a Russian Sailors’ Home is, of course, the first international congress of the Red Hundred. Shall not be able to get a man inside, but do not think that matters much, as meeting will be engaged throwing flowers at one another and serious business will not commence till the meeting of the inner committee. I inclose a list of men already arrived in London, and have the honour to request that you will send me portraits of under-mentioned men.

There were three delegates from Baden, Herr Schmidt from Frieburg, Herr Bleaumeau from Karlsruhe, and Herr Von Dunop from Mannheim. They were not considerable persons, even in the eyes of the world of Anarchism; they called for no particular notice, and therefore the strange thing that happened to them on the night of the congress is all the more remarkable.