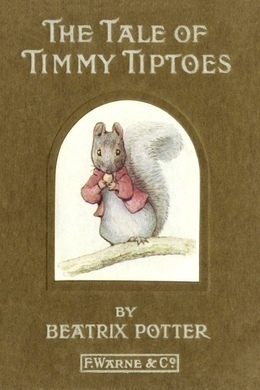 The Tale of Timmy Tiptoes

Timmy Tiptoes and his wife Goody, are two squirrels gathering nuts for the winter and storing them in hollow trees. Wrongly suspected of stealing other squirrel’s nuts, Timmy is beaten up and trapped in a woodpecker’s hole. Here he meets Chippy Hackee, a small striped chipmunk that tends him with kindness and with whom he eats nuts, growing too fat to squeeze through the hole, until one night a big wind blows off the top of the tree, freeing Timmy. Book illustrated with beautiful Potter’s watercolors.

Once upon a time there was a little fat comfortable grey squirrel, called Timmy Tiptoes. He had a nest thatched with leaves in the top of a tall tree; and he had a little squirrel wife called Goody.

Timmy Tiptoes sat out, enjoying the breeze; he whisked his tail and chuckled–“Little wife Goody, the nuts are ripe; we must lay up a store for winter and spring.” Goody Tiptoes was busy pushing moss under the thatch–“The nest is so snug, we shall be sound asleep all winter.” “Then we shall wake up all the thinner, when there is nothing to eat in spring-time,” replied prudent Timothy.

When Timmy and Goody Tiptoes came to the nut thicket, they found other squirrels were there already.

Timmy took off his jacket and hung it on a twig; they worked away quietly by themselves.

Every day they made several journeys and picked quantities of nuts. They carried them away in bags, and stored them in several hollow stumps near the tree where they had built their nest.

When these stumps were full, they began to empty the bags into a hole high up a tree, that had belonged to a wood-pecker; the nuts rattled down–down–down inside.

“How shall you ever get them out again? It is like a money-box!” said Goody.

“I shall be much thinner before spring-time, my love,” said Timmy Tiptoes, peeping into the hole.

They did collect quantities–because they did not lose them! Squirrels who bury their nuts in the ground lose more than half, because they cannot remember the place.

The most forgetful squirrel in the wood was called Silvertail. He began to dig, and he could not remember. And then he dug again and found some nuts that did not belong to him; and there was a fight. And other squirrels began to dig,–the whole wood was in commotion!

Unfortunately, just at this time a flock of little birds flew by, from bush to bush, searching for green caterpillars and spiders. There were several sorts of little birds, twittering different songs.

The squirrels followed and listened. The first little bird flew into the bush where Timmy and Goody Tiptoes were quietly tying up their bags, and it sang–“Who’s-bin digging-up my nuts? Who’s been digging-up my-nuts?”

Timmy Tiptoes went on with his work without replying; indeed, the little bird did not expect an answer. It was only singing its natural song, and it meant nothing at all.

But when the other squirrels heard that song, they rushed upon Timmy Tiptoes and cuffed and scratched him, and upset his bag of nuts. The innocent little bird which had caused all the mischief, flew away in a fright!

Timmy rolled over and over, and then turned tail and fled towards his nest, followed by a crowd of squirrels shouting–“Who’s-been digging-up my-nuts?”

They caught him and dragged him up the very same tree, where there was the little round hole, and they pushed him in. The hole was much too small for Timmy Tiptoes’ figure. They squeezed him dreadfully, it was a wonder they did not break his ribs. “We will leave him here till he confesses,” said Silvertail Squirrel, and he shouted into the hole–

Timmy Tiptoes made no reply; he had tumbled down inside the tree, upon half a peck of nuts belonging to himself. He lay quite stunned and still.

Goody Tiptoes picked up the nut bags and went home. She made a cup of tea for Timmy; but he didn’t come and didn’t come.

Goody Tiptoes passed a lonely and unhappy night. Next morning she ventured back to the nut-bushes to look for him; but the other unkind squirrels drove her away.

She wandered all over the wood, calling–

In the meantime Timmy Tiptoes came to his senses. He found himself tucked up in a little moss bed, very much in the dark, feeling sore; it seemed to be under ground. Timmy coughed and groaned, because his ribs hurted him. There was a chirpy noise, and a small striped Chipmunk appeared with a night light, and hoped he felt better?

It was most kind to Timmy Tiptoes; it lent him its night-cap; and the house was full of provisions.