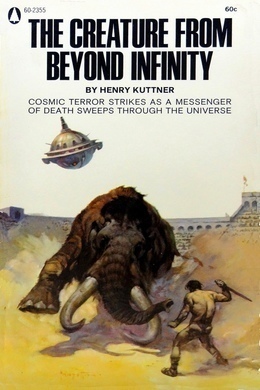 The Creature from Beyond Infinity

A Million Years to Conquer

Like a great, lethal snake, plague creeps through the galaxies. No conscious entity can halt its progress, and life is slowly draining from planet after planet. Only one super-intelligence is capable of preventing cataclysm. To do it, he must penetrate far beyond infinity–to the formless, deathless creature out to kill the universe. Cosmic terror strikes as a messenger of death sweeps through the universe.

Ardath opened his eyes, trying to remember why a blinding pain should be throbbing within his skull. Above him was a twisted girder of yellow metal, and beyond that, the inner wall of the space ship. What had happened?

It seemed scarcely a moment ago that the craft had been filled with a confusion of shouted orders, quickly moving men, and the shriek of cleft atmosphere as the ship drove down. Then had come the shock of landing–blackness. And now?

Painfully Ardath dragged his slight, fragile body erect. All around him were ruin and confusion. Corpses lay sprawled and limp, the bodies of those who had not survived the terrible concussion. Strange men, slim and delicate, their skins had been darkly tanned by the long voyage across space. Ardath started hopefully when he saw that one of the bodies moved slightly and moaned.

Theron! Theron, the commander–highest in rank and wisdom–had survived. A wave of gratefulness swept through Ardath. He was not alone on this new, unknown world, as he had feared. Swiftly he found stimulants and bent over the reviving man.

Theron’s gray, beardless face grew contorted. His pallid blue eyes opened. He drew a lean hand over his bald head as he whispered.

A rocking shudder shook the ship, then suddenly died.

“Who else is alive?” Theron asked with painful effort.

Ardath searched the huge golden ship. He came back with despair on his drawn harrowed features.

“You and I are the only ones left alive, Theron.”

The commander gnawed at his lips.

“So. And I am dying.” He smiled resignedly at Ardath’s sudden protest. “It’s true, Ardath. You do not realize how old I am. For years we have gone through space, and you are the youngest of us. Unshield a port. Let me see where we are.”

“The third planet of this System,” Ardath said.

He pressed a button that swung back a shutter from a nearby port in the golden wall. They saw nothing but darkness at first. Then their eyes became accustomed to the gloom.

The ship lay beached on a dim shore. Blackly ominous the strange world loomed through the gray murk of vague light that filtered through the cloudy sky. A slow drizzle of rain was falling.

“Test the atmosphere,” Theron commanded. Ardath obeyed. Spectroscopic analysis, made from outer space, had indicated that the air here was breathable. The chemical test confirmed this. At Theron’s request, Ardath opened a spacelock.

Air surged in with a queerly choking sulphurous odor. The two men coughed rackingly, until eventually they became accustomed to it.

“Carry me out,” the commander said quietly. His glance met and locked with Ardath’s as the younger man hesitated. “I shall die soon,” he insisted gently. “But first I must–I must know that I have reached my goal.”

Silently Ardath lifted the slight figure in his arms. He splashed through the warm waves and gently laid Theron down on the barren beach. The Sun, hidden behind a cloud blanket, was rising in the first dawn Ardath had ever seen.

A gray sky and sea, a dark shore–those were all he actually saw. Under Ardath’s feet he felt the world shudder with the volcanic fires of creation. Rain and tide had not yet eroded the rocks into sand and soil. No vegetation grew anywhere. He did not know whether the land was an island or a continent. It rose abruptly from the beach and mounted to towering crags against the inland skyline.

Theron sighed. His thin ringers groped blindly over the rocky surface on which he lay.

“You are space-born, Ardath,” he said painfully. “You cannot quite realize that only on a planet can a man find a home. But I am afraid….”

His voice died away. Then it rose again, strengthened. “I am dying but there is something I must tell you first. Listen, Ardath … You never knew your mother planet, Kyria. It is light-years away from this world. Or it was. Centuries ago, we discovered that Kyria was doomed. A wandering planetoid came so close that it would inevitably collide with us and destroy our civilization utterly. “Kyria was a lovely world, Ardath.”

“I know,” Ardath breathed. “I have seen the films in our records.”

“You have seen our great cities, and the green forests and fields–” An agonizing cough rocked the dying commander. He went on hastily. “We fled. A selected group of us made this space ship and left Kyria in search of a new home. But of hundreds of planets that we found, none was suitable. None would sustain human life. This, the third planet of this yellow Sun, is our last hope. Our fuel is almost gone. It is your duty, Ardath, to see that the civilization of Kyria does not perish.”

“But this is a dead world,” the younger man protested.

“It is a young world,” Theron corrected.