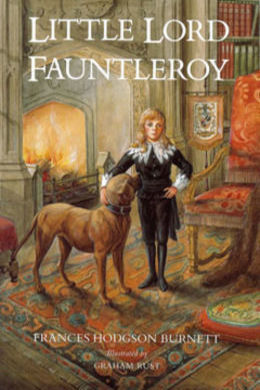 Young Cedric Errol lives in poverty in New York with his mother. When his father, who was disinherited for marrying an American, dies, Cedric is summoned to his grandfather’s English estate. While the crotchety old Earl planned to transform the boy into a docile, traditional lording, it is Little Lord Fauntleroy who does the converting. Through his goodness and innocence, he wins the hearts of his English relatives who welcome his mother with open arms, and he teaches the Earl some valuable lessons about the true meaning of nobility. This classic tale embodies the author’s belief that Nothing in the world is so strong as a kind heart.

Cedric himself knew nothing whatever about it. It had never been even mentioned to him. He knew that his papa had been an Englishman, because his mamma had told him so; but then his papa had died when he was so little a boy that he could not remember very much about him, except that he was big, and had blue eyes and a long mustache, and that it was a splendid thing to be carried around the room on his shoulder. Since his papa’s death, Cedric had found out that it was best not to talk to his mamma about him. When his father was ill, Cedric had been sent away, and when he had returned, everything was over; and his mother, who had been very ill, too, was only just beginning to sit in her chair by the window. She was pale and thin, and all the dimples had gone from her pretty face, and her eyes looked large and mournful, and she was dressed in black.

“Dearest,” said Cedric (his papa had called her that always, and so the little boy had learned to say it),—”dearest, is my papa better?”

He felt her arms tremble, and so he turned his curly head and looked in her face. There was something in it that made him feel that he was going to cry.

Then suddenly his loving little heart told him that he’d better put both his arms around her neck and kiss her again and again, and keep his soft cheek close to hers; and he did so, and she laid her face on his shoulder and cried bitterly, holding him as if she could never let him go again.

Then, little as he was, he understood that his big, handsome young papa would not come back any more; that he was dead, as he had heard of other people being, although he could not comprehend exactly what strange thing had brought all this sadness about. It was because his mamma always cried when he spoke of his papa that he secretly made up his mind it was better not to speak of him very often to her, and he found out, too, that it was better not to let her sit still and look into the fire or out of the window without moving or talking. He and his mamma knew very few people, and lived what might have been thought very lonely lives, although Cedric did not know it was lonely until he grew older and heard why it was they had no visitors. Then he was told that his mamma was an orphan, and quite alone in the world when his papa had married her. She was very pretty, and had been living as companion to a rich old lady who was not kind to her, and one day Captain Cedric Errol, who was calling at the house, saw her run up the stairs with tears on her eyelashes; and she looked so sweet and innocent and sorrowful that the Captain could not forget her. And after many strange things had happened, they knew each other well and loved each other dearly, and were married, although their marriage brought them the ill–will of several persons. The one who was most angry of all, however, was the Captain’s father, who lived in England, and was a very rich and important old nobleman, with a very bad temper and a very violent dislike to America and Americans. He had two sons older than Captain Cedric; and it was the law that the elder of these sons should inherit the family title and estates, which were very rich and splendid; if the eldest son died, the next one would be heir; so, though he was a member of such a great family, there was little chance that Captain Cedric would be very rich himself.

But it so happened that Nature had given to the youngest son gifts which she had not bestowed upon his elder brothers. He had a beautiful face and a fine, strong, graceful figure; he had a bright smile and a sweet, gay voice; he was brave and generous, and had the kindest heart in the world, and seemed to have the power to make every one love him. And it was not so with his elder brothers; neither of them was handsome, or very kind, or clever. When they were boys at Eton, they were not popular; when they were at college, they cared nothing for study, and wasted both time and money, and made few real friends. The old Earl, their father, was constantly disappointed and humiliated by them; his heir was no honor to his noble name, and did not promise to end in being anything but a selfish, wasteful, insignificant man, with no manly or noble qualities. It was very bitter, the old Earl thought, that the son who was only third, and would have only a very small fortune, should be the one who had all the gifts, and all the charms, and all the strength and beauty. Sometimes he almost hated the handsome young man because he seemed to have the good things which should have gone with the stately title and the magnificent estates…