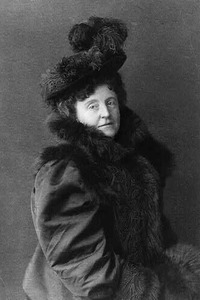 Frances Hodgson Burnett was an English–American playwright and author. She is best known for her children’s stories, in particular The Secret Garden, A Little Princess, and Little Lord Fauntleroy. Following the death of her mother in 1867, the 18-year-old Frances turned to writing to support the family, with her first story published in Godey’s Lady’s Book in 1868. She was soon being published regularly and her first novel, That Lass o’ Lowrie’s, was published in 1877.

In 1886 she published Little Lord Fauntleroy and was originally intended as a children’s book, but had a great appeal to mothers and sold more than half a million copies. Later works include A Little Princes, The Lady of Quality and The Secret Garden, the children’s novel for which she is probably best known today. (source: Wikipedia)

Being A Most Curious, Hitherto Unknown History, As Related To Mr. Isaac Bickerstaff But Not Presented To the World of Fashion … and Now for the First Ti...read more »

Sara Crewe is a bright and charming student at Miss Minchin’s Select Seminary for Young Ladies. When her adoring father dies on the eve of her eighth bi...read more »

First published as The Making of a Marchioness followed by its sequel The Methods of Lady Walderhurst, the two novels were combined into Emily Fox-Seton...read more »

Young Cedric Errol lives in poverty in New York with his mother. When his father, who was disinherited for marrying an American, dies, Cedric is summone...read more »

Twelve-year-old Marco and his friend, the Rat, play a vital and dangerous part in restoring the lost prince to his throne in war-torn Samavia.

A house with a hundred rooms is a house full of secrets. That’s what orphaned Mary Lennox finds out when she comes to live in her uncle’s mansion on the...read more »