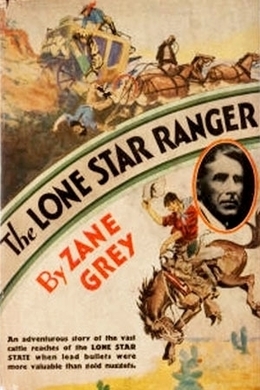 A Romance of the Border

A cowpoke tried to beat Buck Duane to the draw, so Buck shot him dead. From that moment on, he lived life on the run, killing to survive. Then he met a woman who changed him and a Texas Ranger who offered him a pardon if he rode out alone to stop the notorious Cheseldine Gang.

So it was in him, then–an inherited fighting instinct, a driving intensity to kill. He was the last of the Duanes, that old fighting stock of Texas. But not the memory of his dead father, nor the pleading of his soft-voiced mother, nor the warning of this uncle who stood before him now, had brought to Buck Duane so much realization of the dark passionate strain in his blood. It was the recurrence, a hundred-fold increased in power, of a strange emotion that for the last three years had arisen in him.

“Yes, Cal Bain’s in town, full of bad whisky an’ huntin’ for you,” repeated the elder man, gravely.

“It’s the second time,” muttered Duane, as if to himself.

“Son, you can’t avoid a meetin’. Leave town till Cal sobers up. He ain’t got it in for you when he’s not drinkin’.”

“But what’s he want me for?” demanded Duane. “To insult me again? I won’t stand that twice.”

“He’s got a fever that’s rampant in Texas these days, my boy. He wants gun-play. If he meets you he’ll try to kill you.”

Here it stirred in Duane again, that bursting gush of blood, like a wind of flame shaking all his inner being, and subsiding to leave him strangely chilled.

“Lord knows there ain’t any reason. But what’s that to do with most of the shootin’ these days? Didn’t five cowboys over to Everall’s kill one another dead all because they got to jerkin’ at a quirt among themselves? An’ Cal has no reason to love you. His girl was sweet on you.”

“I quit when I found out she was his girl.”

“I reckon she ain’t quit. But never mind her or reasons. Cal’s here, just drunk enough to be ugly. He’s achin’ to kill somebody. He’s one of them four-flush gun-fighters. He’d like to be thought bad. There’s a lot of wild cowboys who’re ambitious for a reputation. They talk about how quick they are on the draw. T hey ape Bland an’ King Fisher an’ Hardin an’ all the big outlaws. They make threats about joinin’ the gangs along the Rio Grande. They laugh at the sheriffs an’ brag about how they’d fix the rangers. Cal’s sure not much for you to bother with, if you only keep out of his way.”

“You mean for me to run?” asked Duane, in scorn.

“I reckon I wouldn’t put it that way. Just avoid him. Buck, I’m not afraid Cal would get you if you met down there in town. You’ve your father’s eye an’ his slick hand with a gun. What I’m most afraid of is that you’ll kill Bain.”

Duane was silent, letting his uncle’s earnest words sink in, trying to realize their significance.

“If Texas ever recovers from that fool war an’ kills off these outlaws, why, a young man will have a lookout,” went on the uncle. “You’re twenty-three now, an’ a powerful sight of a fine fellow, barrin’ your temper. You’ve a chance in life. But if you go gun-fightin’, if you kill a man, you’re ruined. Then you’ll kill another. It’ll be the same old story. An’ the rangers would make you an outlaw. The rangers mean law an’ order for Texas. This even-break business doesn’t work with them. If you resist arrest they’ll kill you. If you submit to arrest, then you go to jail, an’ mebbe you hang.”

“I reckon you wouldn’t,” replied the old man. “You’d be like your father. He was ever ready to draw–too ready. In times like these, with the Texas rangers enforcin’ the law, your Dad would have been driven to the river. An’, son, I’m afraid you’re a chip off the old block. Can’t you hold in–keep your temper–run away from trouble? Because it’ll only result in you gettin’ the worst of it in the end. Your father was killed in a street-fight. An’ it was told of him that he shot twice after a bullet had passed through his heart. Think of the terrible nature of a man to be able to do that. If you have any such blood in you, never give it a chance.”

“What you say is all very well, uncle,” returned Duane, “but the only way out for me is to run, and I won’t do it. Cal Bain and his outfit have already made me look like a coward. He says I’m afraid to come out and face him. A man simply can’t stand that in this country. Besides, Cal would shoot me in the back some day if I didn’t face him.”

“Well, then, what’re you goin’ to do?” inquired the elder man.

“No, but you’re comin’ to it mighty fast. That damned spell is workin’ in you. You’re different to-day. I remember how you used to be moody an’ lose your temper an’ talk wild. Never was much afraid of you then. But now you’re gettin’ cool an’ quiet, an’ you think deep, an’ I don’t like the light in your eye. It reminds me of your father.”

“I wonder what Dad would say to me to-day if he were alive and here,” said Duane.

“What do you think? What could you expect of a man who never wore a glove on his right hand for twenty years?”

“Well, he’d hardly have said much. Dad never talked. But he would have done a lot. And I guess I’ll go down-town and let Cal Bain find me.”