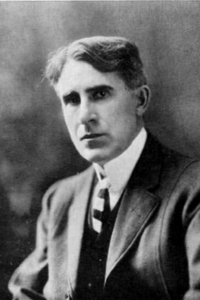 Pearl Zane Grey was an American author best known for his popular adventure novels and stories that were a basis for the Western genre in literature and the arts; he idealized the American frontier. Riders of the Purple Sage was his best-selling book. Grey became one of the first millionaire authors. With his veracity and emotional intensity, he connected with millions of readers worldwide, during peacetime and war, and inspired many Western writers who followed him. In addition to the commercial success of his printed works, they had second lives and continuing influence when adapted as films and television productions. He was a major force in shaping the myths of the Old West; his books and stories were adapted into other media, such as film and TV productions and as of 2012, 112 films, two television episodes, and a television series, Dick Powell’s Zane Grey Theater, had been made that were based loosely on Grey’s novels and short stories.

Logan Huett believed he knew the West. Once a scout in the Army, he was familiar with both the hardships and rewards of living the pioneer life, but not...read more »

Not all outlaws are bad mend. Rich Ames didn’t set out to be a gunslinger–it was forced on him. When two men roughed up his sweet sister, Rich reached f...read more »

Zane Grey is at his best in this story of the building of the Boulder Dam ( Later renamed the Hoover Dam). It shows an excellent depiction of early day ...read more »

Georgianna Stockwell, a free-spirited young woman from the East, moves to the wilds of the Tonto Basin in Arizona and she creates a violent culture clas...read more »

Ben Ide is a failure in the horse trade because he loves horses more than money. A few bad deals have turned the world against him. His greatest adversa...read more »

The sun set across the purple sky over the Don Carlos Rancho while the warm Santa Fe breeze rustled through the grazing fields just off the trail. The C...read more »

Kidnapped from a soft life, millionaire’s daughter Janey Endicott is forced to join an archaeological expedition. But the harsh realities facing her are...read more »

He was called Nevada, a name he took to lose his past. As a boy he had been thrown among brutal and evil men. He had worked himself above their influenc...read more »

A classic tale of drama on the frontier, a thrilling tale of a how a man’s home is truly his castle. The Lindsay family has come west hoping to help the...read more »

Riders of the Purple Sage is a classic of the Western genre. There had long been a feud between the gentiles and the Mormons in Utah, a feud that Jane W...read more »

While a battle rages between two outlaw gangs in a remote Utah canyon, Jim struggles to rescue Helen Herrick, who has been captured and held for ransom....read more »

Kent Wingfield, a young cowboy, rides into the desert with an old prospector, looking for gold. Then one day the old man realizes this will be his last ...read more »

A brooding air of mystery hung over the locked-in valley. Only Rock’s blazing sixgun could free her from the unseen peril.

Prospecting was a lonely business for Tappan, but his burro Jenet was good company, and more. She knew the trails and waterholes better than Tappan, fro...read more »

Jim Cleve has been deemed, “a good guy” all of his life and it agitates him to no end. Even his girlfriend, Joan Randle has scorned him for this “weakne...read more »

Set in Middletown, USA, this tells the story of Daren Lane, who returns from World War I to a society of declining morals tired of hearing about the war...read more »

When the first drift fence is built across a free cattle range, anger overflows. Jim Traft, the tenderfoot in charge of building the fence, finds himsel...read more »

A cowpoke tried to beat Buck Duane to the draw, so Buck shot him dead. From that moment on, he lived life on the run, killing to survive. Then he met a ...read more »

Accidentally overhearing a plot to kidnap the niece of a prominent rancher as she arrives from the East, Milt Dale springs into action. He comes out of ...read more »

John Shefford rode into Utah’s valley in search of a new life and when he met Fay Larkin, he knew he had found it. Even when she was charged with murder...read more »

A soldier returns home to find his parents displaced and their property stolen in this classic Western. After surviving the brutality of the First Worl...read more »

Adam Brite – Texas Joe Shipman – Pan Handle Smith – together with the biggest herd of cattle ever to travel the Chisholm Trail, they were going all the ...read more »

Romance of the American Indian–the tragedy and glory of the race. Considered one of Zane Grey’s best novels, it reveals Grey’s empathy for the Native Am...read more »

Greed and gold unleash a storm of robbery, vengeance, and murder. On the word of a dying Indian, the three Emerson brothers come to Thunder Mountain in ...read more »

This is the classic story of a deadly feud between cattlemen and sheepherders in the Tonto Basin of Arizona in the years years of the 1800s that gave su...read more »

On the first day of spring, a little girl goes looking for the robin that sang to her every day last summer. She sees a bee, a yellow forsythia bush, an...read more »

Lucy Watson, a young schoolteacher, is appointed welfare instructor in a community of isolated backwoods folk. She quickly overcomes their fears, and ac...read more »

The tall, young Texan had gambled, fought, and killed in every town from Montana to Mexico. He’d been in plenty of places where there was no law, but th...read more »

Young Terrill “Rill” Lambeth could ride and shoot with the best men in the South. When her widowed, war-ruined father packs up a caravan and drives towa...read more »