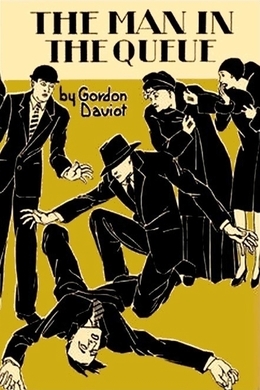 The Man in the Queue

Inspector Alan Grant searches for the identity of a man killed in the line at a theater and for the identity of the killer—whom no one saw. A long line had formed for the standing-room-only section of the Woffington Theatre. London’s favorite musical comedy of the past two years was finishing its run at the end of the week. Suddenly, the line began to move, forming a wedge before the open doors as hopeful theatergoers nudged their way forward. But one man, his head sunk down upon his chest, slowly sank to his knees and then, still more slowly, keeled over on his face. Thinking he had fainted, a spectator moved to help, but recoiled in horror from what lay before him: the man in the queue had a small silver dagger neatly plunged into his back. With the wit and guile that have made Inspector Grant a favorite of mystery fans, the inspector sets about discovering just how a murder occurred among so many witnesses, none of whom saw a thing.

It was between seven and eight o’clock on a March evening, and all over London the bars were being drawn back from pit and gallery doors. Bang, thud, and clank. Grim sounds to preface an evening’s amusement. But no last trump could have so galvanized the weary attendants on Thespis and Terpsichore standing in patient column of four before the gates of promise. Here and there, of course, there was no column. At the Irving, five people spread themselves over the two steps and sacrificed in warmth what they gained in comfort; Greek tragedy was not popular. At the Playbox there was no one; the Playbox was exclusive, and ignored the existence of pits. At the Arena, which had a three weeks’ ballet season, there were ten persons for the gallery and a long queue for the pit. But at the Woffington both human strings tailed away apparently into infinity. Long ago a lordly official had come down the pit queue and, with a gesture of his outstretched arm that seemed to guillotine hope, had said, “All after here standing room only.” Having thus, with a mere contraction of his deltoid muscle, separated the sheep from the goats, he retired in Olympian state to the front of the theatre, where beyond the glass doors there was warmth and shelter. But no one moved away from the long line. Those who were doomed to stand for three hours more seemed indifferent to their martyrdom. They laughed and chattered, and passed each other sustaining bits of chocolate in torn silver paper. Standing room only, was it? Well, who would not stand, and be pleased to, in the last week of Didn’t You Know? Nearly two years it had run now, London’s own musical comedy, and this was its swan song. The stalls and the circle had been booked up weeks ago, and many foolish virgins, not used to queues, had swelled the waiting throng at the barred doors because bribery and corruption had proved unsuccessful at the box office. Every soul in London, it seemed, was trying to crowd into the Woffington to cheer the show just once again. To see if Golly Gollan had put a new gag into his triumph of foolery–Gollan who had been rescued from a life on the road by a daring manager, and had been given his chance and had taken it. To sun themselves yet once more in the loveliness and sparkle of Ray Marcable, that comet that two years ago had blazed out of the void into the zenith and had dimmed the known and constant stars. Ray danced like a blown leaf, and her link aloof smile had killed the fashion for dentifrice advertisements in six months. “Her indefinable charm,” the critics called it, but her followers called it many extravagant things, and defined it to each other with hand-wavings and facial contortions when words proved inadequate to convey the whole of her faery quality. Now she was going to America, like all the good things, and after the last two years London without Ray Marcable would be an unthinkable desert. Who would not stand forever just to see her once more?

It had been drizzling since five o’clock, and every now and then a light chill air lifted the drizzle and half playfully swept the queue from end to end with it in one long brushstroke. That discouraged no one–even the weather could not take itself seriously tonight; it had merely sufficient tang to provide a suitable apéritif to the fare in front of them. The queue twiddled its toes, and Cockneywise made the most of whatever entertainment provided itself in the dark canyon of the lane. First there had come the newsboys, small things with thin, impassive faces and wary eyes. They had flickered down the queue like wildfire and disappeared, leaving behind a trail of chatter and fluttering papers. Then a man with legs shorter than his body laid a ragged strip of carpet on the damp pavement and proceeded to tie himself into knots until he looked as a spider does when it is taken unawares, his mournful toad’s eyes gleaming now and then from totally unexpected places, in the writhing mass, so that even the most indifferent spectator felt his spine trickle. He was succeeded by a man who played popular airs on the fiddle, happily oblivious of the fact that his E string was half a tone flat. Then, simultaneously, came a singer of sentimental ballads and a syncopated orchestra of three. After they had scowled at each other for a moment or two, the soloist tried to rush things on the possession-being-nine-points principle, by breaking into a wailing Because You Came to Me, but the leader of the orchestra, handing his guitar to a lieutenant, proceeded to interview the tenor, with his elbows out and his hands lifted. The tenor tried to ignore him by looking over his head, but found it difficult, because the musician was half a head taller than himself and appeared to be ubiquitous. He persevered for another two lines, and then the ballad wavered uncertainly into bitter expostulation in his natural voice, and two minutes later he faded up the dark alley, mumbling threats and compl