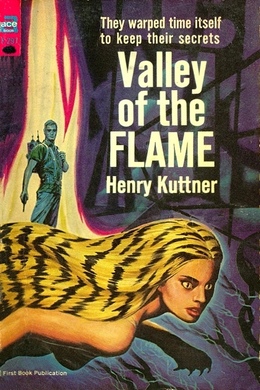 Valley of the Flame

Deep in an unexplored jungle, Brian Raft sought the secret of the legendary VALLEY OF THE FLAME. Somewhere there was a radioactive fire that could perform miracles of super-science. Somewhere there was a place where cat-people prowled, where time was altered, and incredible mysteries held their secrets of power and fortune for the daring discoverer.

Far off in the jungle an animal screamed. A river-moth flapped against the screen, nearly as large as a fruit-bat: And very far away, subsensory, almost, Brian Raft could hear the low pulsing of drums. Not unusual, drums on the Jutahy, in the great valley of Amazonas. But these were no signal messages.

Raft wasn’t an imaginative man. He left all that to Dan Craddock, with his Welsh ghosts and his shadow-people of the lost centuries. Still, Raft was a doctor, and when those drums throbbed in the jungle something curious happened here in his little hospital of plastic shacks, smelling of antiseptic. Something he couldn’t ignore.

When a sick man’s blood beats in rhythm with the distant drums, slow or fast as the far-off echoes set the pace, a doctor has reason to wonder….

The great moth beat softly against the screen. Craddock bent over a sterilizer, steam clouding up around his white head so that he looked like a necromancer stooping over a cauldron. The drums throbbed on. Raft could feel his own heart answering to their rhythm.

He glanced at Craddock again and tried not to remember what the older man had been telling him about his wild Welsh ancestors and the things they had believed. Sometimes he thought Craddock believed them too, or half believed, at least when he had been drinking.

He’d got to know Craddock pretty well in the months they had worked together, but he realized that even yet he knew only the surface Craddock, that another man entirely lived in abeyance behind the companionable front which the Welshman showed him, a man with memories he never spoke of, and stories he never told.

This experimental station, far up the Jutahy, was a curious contrast, with its asepsis and its plastics and its glitter of new instruments, to the jungle hemming it in. They were on assignment just now to find a specific for atypical malaria.

In the forty years since the end of World War II, nothing yet had been discovered any safer than the old quinine and atabrine treatment, and Raft was sifting the jungle lore now to make sure there might not be some truth in the old Indio knowledge, hidden behind masks of devil-worship and magic.

He had hunted down virus diseases in Tibet, Indo-China, Madagascar, and he had learned to respect much that the witchdoctors knew. Some of their treatments were based on very sound theories.

But he wished the drums would stop. He turned irritably from the window and glanced once more at Craddock, who was humming a Welsh ballad under his breath. A ballad full of wild, skirling music about ghosts and fighting.

Craddock had talked a lot lately–since the drums began–about ghosts and fighting. He said he smelled danger. In the old days in Wales men could always scent trouble in the wind, and they’d drink quarts of uisquebaugh and go out brandishing swords, ready for anything. All Raft could smell was the reek of disinfectant that filled the little hospital.

And all the wind brought to him was the sound of drams.

“In the old days,” Craddock said suddenly, looking up from the sterilizer and blinking through steam, “there’d be a whisper in the air from Tralee or Cobh, and we knew the Irish were coming over the water to raid. Or maybe there’d be something from the south, and we’d get ready for the men of Cornwall. But we’d know. We’d know.”

“Okay. But I felt something like this once before.” Craddock sucked in his breath, a curious look of fright and incredulity on his wrinkled brown face. He turned back to the steam-cloud, and Raft watched him in puzzled wonder.

There was a mystery about Craddock. He was a biologist, and a good one, but for thirty years or more he had hung around the Jutahy country, never venturing farther away than Manaos, living precariously as a sort of jungle general practitioner.

Raft had added him to the party on impulse, since Craddock knew the country and the natives. He hadn’t expected too much of the Welshman in the laboratory, for something had happened to Craddock’s hands–they were badly maimed. But he was pleasantly disappointed on that score.

Raft watched the mutilated hands working with hypodermics, twisting plunger from tube, deftly pulling the hollow needles free. Craddock had three fingers on one hand, and the other was a claw, with oddly stained and textured skin. He never spoke of what had happened. His injuries didn’t look like the scars of acid burns or animal teeth. Still, he was surprisingly deft, even when liquor was heavy on his breath.

It was heavy now, and Raft thought the man must be deliberately timing his motions to the rhythms of the drums. Or perhaps not. Raft himself had to pause consciously and break step with the beat. And some of the sick men in the ward were alive, he thought, solely because the drum-beats would not let their hearts stop pumping.