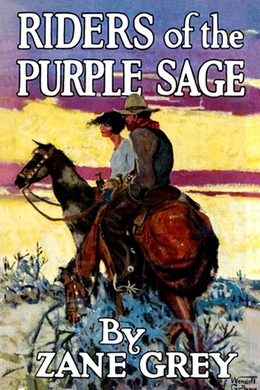 Riders of the Purple Sage

Riders of the Purple Sage is a classic of the Western genre. There had long been a feud between the gentiles and the Mormons in Utah, a feud that Jane Withersteen, daughter of a prominent Mormon leader, chooses to ignore. When Elder Tull discovers that the woman he meant to make one of his wives has offered hospitality to an outsider, he vows vengeance. But Tull underestimates Jane’s courage and the determination of the riders of the beautiful—and dangerous—plains of the old west.

A sharp clip-crop of iron-shod hoofs deadened and died away, and clouds of yellow dust drifted from under the cottonwoods out over the sage.

Jane Withersteen gazed down the wide purple slope with dreamy and troubled eyes. A rider had just left her and it was his message that held her thoughtful and almost sad, awaiting the churchmen who were coming to resent and attack her right to befriend a Gentile.

She wondered if the unrest and strife that had lately come to the little village of Cottonwoods was to involve her. And then she sighed, remembering that her father had founded this remotest border settlement of southern Utah and that he had left it to her. She owned all the ground and many of the cottages. Withersteen House was hers, and the great ranch, with its thousands of cattle, and the swiftest horses of the sage. To her belonged Amber Spring, the water which gave verdure and beauty to the village and made living possible on that wild purple upland waste. She could not escape being involved by whatever befell Cottonwoods.

That year, 1871, had marked a change which had been gradually coming in the lives of the peace-loving Mormons of the border. Glaze–Stone Bridge–Sterling, villages to the north, had risen against the invasion of Gentile settlers and the forays of rustlers. There had been opposition to the one and fighting with the other. And now Cottonwoods had begun to wake and bestir itself and grown hard.

Jane prayed that the tranquillity and sweetness of her life would not be permanently disrupted. She meant to do so much more for her people than she had done. She wanted the sleepy quiet pastoral days to last always. Trouble between the Mormons and the Gentiles of the community would make her unhappy. She was Mormon-born, and she was a friend to poor and unfortunate Gentiles. She wished only to go on doing good and being happy. And she thought of what that great ranch meant to her. She loved it all–the grove of cottonwoods, the old stone house, the amber-tinted water, and the droves of shaggy, dusty horses and mustangs, the sleek, clean-limbed, blooded racers, and the browsing herds of cattle and the lean, sun-browned riders of the sage.

While she waited there she forgot the prospect of untoward change. The bray of a lazy burro broke the afternoon quiet, and it was comfortingly suggestive of the drowsy farmyard, and the open corrals, and the green alfalfa fields. Her clear sight intensified the purple sage-slope as it rolled before her. Low swells of prairie-like ground sloped up to the west. Dark, lonely cedar-trees, few and far between, stood out strikingly, and at long distances ruins of red rocks. Farther on, up the gradual slope, rose a broken wall, a huge monument, looming dark purple and stretching its solitary, mystic way, a wavering line that faded in the north. Here to the westward was the light and color and beauty. Northward the slope descended to a dim line of canyons from which rose an up-flinging of the earth, not mountainous, but a vast heave of purple uplands, with ribbed and fan-shaped walls, castle-crowned cliffs, and gray escarpments. Over it all crept the lengthening, waning afternoon shadows.

The rapid beat of hoofs recalled Jane Withersteen to the question at hand. A group of riders cantered up the lane, dismounted, and threw their bridles. They were seven in number, and Tull, the leader, a tall, dark man, was an elder of Jane’s church.

“Did you get my message?” he asked, curtly.

“I sent word I’d give that rider Venters half an hour to come down to the village. He didn’t come.”

“He knows nothing of it;” said Jane. “I didn’t tell him. I’ve been waiting here for you.”

“I left him in the courtyard.”

“Here, Jerry,” called Tull, turning to his men, “take the gang and fetch Venters out here if you have to rope him.”

The dusty-booted and long-spurred riders clanked noisily into the grove of cottonwoods and disappeared in the shade.

“Elder Tull, what do you mean by this?” demanded Jane. “If you must arrest Venters you might have the courtesy to wait till he leaves my home. And if you do arrest him it will be adding insult to injury. It’s absurd to accuse Venters of being mixed up in that shooting fray in the village last night. He was with me at the time. Besides, he let me take charge of his guns. You’re only using this as a pretext. What do you mean to do to Venters?”

“I’ll tell you presently,” replied Tull. “But first tell me why you defend this worthless rider?”

“Worthless!” exclaimed Jane, indignantly. “He’s nothing of the kind. He was the best rider I ever had. There’s not a reason why I shouldn’t champion him and every reason why I should. It’s no little shame to me, Elder Tull, that through my friendship he has roused the enmity of my people and become an outcast. Besides I owe him eternal gratitude for saving the life of little Fay.”