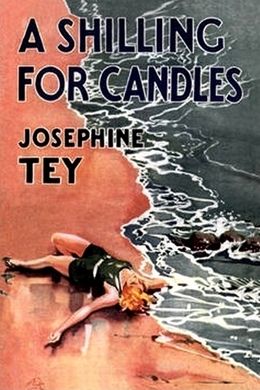 A Shilling for Candles

Beneath the sea cliffs of the south coast, suicides are a sad but common fact of life. Yet even the hardened coastguard knows something is wrong when a beautiful film actress is found lying dead on the beach one bright summer’s morning. Inspector Grant has to take a more professional attitude: death by suicide, however common, has to have a motive – just like murder…

It was a little after seven on a summer morning, and William Potticary was taking his accustomed way over the short down grass of the cliff-top. Beyond his elbow, two hundred feet below, lay the Channel, very still and shining, like a milky opal. All around him hung the bright air, empty as yet of larks. In all the sunlit world no sound except for the screaming of some seagulls on the distant beach; no human activity except for the small lonely figure of Potticary himself, square and dark and uncompromising. A million dewdrops sparkling on the virgin grass suggested a world new-come from its Creator’s hand. Not to Potticary, of course. What the dew suggested to Potticary was that the ground fog of the early hours had not begun to disperse until well after sunrise. His subconscious noted the fact and tucked it away, while his conscious mind debated whether, having raised an appetite for breakfast, he should turn at the Gap and go back to the Coastguard Station, or whether, in view of the fineness of the morning, he should walk into Westover for the morning paper, and so hear about the latest murder two hours earlier than he would otherwise. Of course, what with wireless, the edge was off the morning paper, as you might say. But it was an objective. War or peace, a man had to have an objective. You couldn’t go into Westover just to look at the front. And going back to breakfast with the paper under your arm made you feel fine, somehow. Yes, perhaps he would walk into the town.

The pace of his black, square-toed boots quickened slightly, their shining surface winking in the sunlight. Proper service, these boots were. One might have thought that Potticary, having spent his best years in brushing his boots to order, would have asserted his individuality, or expressed his personality, or otherwise shaken the dust of a meaningless discipline off his feet by leaving the dust on his boots. But no, Potticary, poor fool, brushed his boots for love of it. He probably had a slave mentality, but had never read enough for it to worry him. As for expressing one’s personality, if you described the symptoms to him he would, of course, recognize them. But not by name; In the Service they call that “contrariness.”

A seagull flashed suddenly above the cliff-top, and dropped screaming from sight to join its wheeling comrades below. A dreadful row these gulls were making. Potticary moved over to the cliff edge to see what jetsam the tide, now beginning to ebb, had left for them to quarrel over.

The white line of the gently creaming surf was broken by a patch of verdigris green. A bit of cloth. Baize, or something. Funny it should stay so bright a color after being in the water so–

Potticary’s blue eyes widened suddenly, his body becoming strangely still. Then the square black boots began to run. Thud, thud, thud, on the thick turf, like a heart beating. The Gap was two hundred yards away, but Potticary’s time would not have disgraced a track performer. He clattered down the rough steps hewn in the chalk of the Gap, gasping; indignation welling through his excitement. That was what came of going into cold water before breakfast! Lunacy, so help him. Spoiling other people’s breakfasts, too. Schaefer’s best, except where ribs broken. Not likely to be ribs broken. Perhaps only a faint after all. Assure the patient in a loud voice that he is safe. Her arms and legs were as brown as the sand. That was why he had thought the green thing a piece of cloth. Lunacy, so help him. Who wanted cold water in the dawn unless they had to swim for it? He’d had to swim for it in his time. In that Red Sea port. Taking in a landing party to help the Arabs. Though why anyone wanted to help the lousy bastards–that was the time to swim. When you had to. Orange juice and thin toast, too. No stamina. Lunacy, so help him.

It was difficult going on the beach. The large white pebbles slid maliciously under his feet, and the rare patches of sand, being about tide level, were soft and yielding. But presently he was within the cloud of gulls, enveloped by their beating wings and their wild crying.

There was no need for Schaefer’s, nor for any other method. He saw that at a glance. The girl was past all help. And Potticary, who had picked bodies unemotionally from the Red Sea surf, was strangely moved. It was all wrong that someone so young should be lying there when all the world was waking up to a brilliant day; when so much of life lay in front of her. A pretty girl, too, she must have been. Her hair had a dyed look, but the rest of her was all right.

A wave washed over her feet and sucked itself away, derisively, through the scarlet-tipped toes. Potticary, although the tide in another minute would be yards away, pulled the inanimate heap a little higher up the beach, beyond reach of the sea’s impudence.