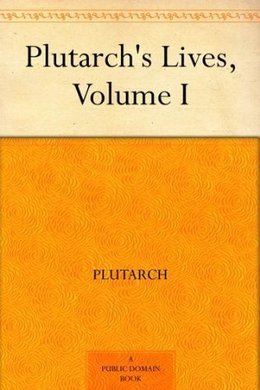 Written at the beginning of the second century A.D., Plutarch’s Lives is a brilliant social history of the ancient world by one of the greatest biographers and moralists of all time. In what is by far his most famous and influential work, Plutarch reveals the character and personality of his subjects and how they led ultimately to tragedy or victory. Richly anecdotal and full of detail, Volume I contains profiles and comparisons of Romulus and Theseus, Numa and Lycurgus, Fabius and Pericles, and many more powerful figures of ancient Greece and Rome.

As in books on geography, Sossius Senecio, the writers crowd the countries of which they know nothing into the furthest margins of their maps, and write upon them legends such as, “In this direction lie waterless deserts full of wild beasts;” or, “Unexplored morasses;” or, “Here it is as cold as Scythia;” or, “A frozen sea;” so I, in my writings on Parallel Lives, go through that period of time where history rests on the firm basis of facts, and may truly say, “All beyond this is portentous and fabulous, inhabited by poets and mythologers, and there is nothing true or certain.”

When I had written the lives of Lykurgus the lawgiver and Numa the king, it appeared to me natural to go back to Romulus also, as I was engaged on the history of times so close to his. So when I was reflecting, in the words of Aeschylus,

it occurred to me to compare the founder of the fair and famous city of Athens with him, and to contrast Theseus with the father of unconquered glorious Rome. Putting aside, then, the mythological element, let us examine his story, and wherever it obstinately defies probability, and cannot be explained by natural agency, let us beg the indulgence of our readers, who will kindly make allowance for tales of antiquity.

II. Theseus appears to have several points of resemblance to Romulus. Both were unacknowledged illegitimate children, and were reputed to descend from the Gods.

and both were wise as well as powerful. The one founded Rome, while the other was the joint founder of Athens; and these are two of the most famous of cities. Both carried off women by violence, and neither of them escaped domestic misfortune and retribution, but towards the end of their lives both were at variance with their countrymen, if we may put any trust in the least extravagant writings upon the subject.

III. Theseus traced his descent on the father’s side from Erechtheus and the original Autochthones, while on the mother’s side he was descended from Pelops. For Pelops surpassed all the other princes of the Peloponnesus in the number of his children as well as in wealth; and of these he gave many of his daughters in marriage to the chief men of the country, and established many of his sons as rulers in various cities. One of these, Pittheus, the grandfather of Theseus, founded Troezen, which is indeed but a little state, though he had a greater reputation than any man of his time for eloquence and wisdom. The nature of this wisdom of his seems to have been much of the same kind as that which made the reputation of Hesiod, in the collection of maxims known as the ‘Works and Days.’ One of these maxims is indeed ascribed to Pittheus:

At any rate, this is what Aristotle the philosopher has recorded; and also Euripides, when he speaks of Hippolytus as “child of holy Pittheus,” shows the prevailing opinion about Pittheus. Now Aegeus desired to have children, and the Oracle at Delphi is said to have given him the well-known response, forbidding him to have intercourse with any woman before he reached Athens, but not appearing to explain this clearly. Consequently, on his way home, he went to Troezen, and asked the advice of Pittheus about the response of the God, which ran thus:

Pittheus clearly perceived what the oracle must mean, and persuaded or cheated Aegeus into an intrigue with Aethra. Afterwards, when he discovered that he had conversed with the daughter of Pittheus, as he imagined that she might prove with child, he left behind him his sword and sandals hidden under a great stone, which had a hollow inside it exactly fitting them. This he told to Aethra alone, and charged her if a son of his should be born, and on growing to man’s estate should be able to lift the stone and take from under it the deposit, that she should send him at once with these things to himself, in all secrecy, and as far as possible concealing his journey from observation. For he greatly feared the sons of Pallas, who plotted against him, and despised him on account of his childlessness, they themselves being fifty brothers, all the sons of Pallas.