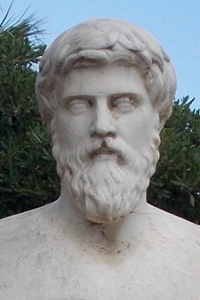 Plutarch (Πλούταρχος, Ploútarkhos) later named, upon becoming a Roman citizen, Lucius Mestrius Plutarchus, was a Greek historian, biographer, and essayist, known primarily for his Parallel Lives and Moralia. He is considered today to be a Middle Platonist. Plutarch’s best-known work is the Parallel Lives, a series of biographies of famous Greeks and Romans, arranged in pairs to illuminate their common moral virtues and vices. The surviving Lives contain 23 pairs, each with one Greek Life and one Roman Life, as well as four unpaired single Lives. As is explained in the opening paragraph of his Life of Alexander, Plutarch was not concerned with history so much as the influence of character, good or bad, on the lives and destinies of men. Whereas sometimes he barely touched on epoch-making events, he devoted much space to charming anecdote and incidental triviality, reasoning that this often said far more for his subjects than even their most famous accomplishments. He sought to provide rounded portraits, likening his craft to that of a painter; indeed, he went to tremendous lengths (often leading to tenuous comparisons) to draw parallels between physical appearance and moral character. In many ways, he must be counted amongst the earliest moral philosophers.

Written at the beginning of the second century A.D., Plutarch’s Lives is a brilliant social history of the ancient world by one of the greatest biograph...read more »

Lives is a series of biographies of famous Greeks and Romans by the ancient Greek historian Plutarch who lived during the first and second century AD. C...read more »