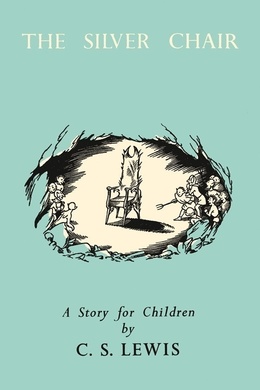 Jill and Eustace must rescue the Prince from the evil Witch. Narnia…where owls are wise, where some of the giants like to snack on humans, where a prince is put under an evil spell…and where the adventure begins. Eustace and Jill escape from the bullies at school through a strange door in the wall, which, for once, is unlocked. It leads to the open moor…or does it? Once again Aslan has a task for the children, and Narnia needs them. Through dangers untold and caverns deep and dark, they pursue the quest that brings them face and face with the evil Witch. She must be defeated if Prince Rillian is to be saved.

It was a dull autumn day and Jill Pole was crying behind the gym.

She was crying because they had been bullying her. This is not going to be a school story, so I shall say as little as possible about Jill’s school, which is not a pleasant subject. It was “Co-educational”, a school for both boys and girls, what used to be called a “mixed” school; some said it was not nearly so mixed as the minds of the people who ran it. These people had the idea that boys and girls should be allowed to do what they liked. And unfortunately what ten or fifteen of the biggest boys and girls liked best was bullying the others. All sorts of things, horrid things, went on which at an ordinary school would have been found out and stopped in half a term; but at this school they weren’t. Or even if they were, the people who did them were not expelled or punished. The Head said they were interesting psychological cases and sent for them and talked to them for hours. And if you knew the right sort of things to say to the Head, the main result was that you became rather a favourite than otherwise.

That was why Jill Pole was crying on that dull autumn day on the damp little path which runs between the back of the gym and the shrubbery. And she hadn’t nearly finished her cry when a boy came round the corner to the gym whistling, with his hands in his pockets. He nearly ran into her.

Jill only made faces; the sort you make when you’re trying to say something but find that if you speak you’ll start crying again.

“It’s Them, I suppose–as usual,” said the boy grimly, digging his hands further into his pockets.

Jill nodded. There was no need for her to say anything, even if she could have said it. They both knew.

He meant well, but he did talk rather like someone beginning a lecture. Jill suddenly flew into a temper (which is quite a likely thing to happen if you have been interrupted in a cry).

“Oh, go away and mind your own business,” she said. “Nobody asked you to come barging in, did they? And you’re a nice person to start telling us what we all ought to do, aren’t you? I suppose you mean we ought to spend all our time sucking up to Them, and currying favour, and dancing attendance on Them like you do.”

“Oh, Lor!” said the boy, sitting down on the grassy bank at the edge of the shrubbery and very quickly getting up again because the grass was soaking wet. His name unfortunately was Eustace Scrubb, but he wasn’t a bad sort.

“Pole!” he said, “Is that fair? Have I been doing anything of the sort this term? Didn’t I stand up to Carter about the rabbit? And didn’t I keep the secret about Spivvins–under torture too? And didn’t I—-“

Scrubb saw that she wasn’t quite herself yet and very sensibly offered her a peppermint. He had one too. Presently Jill began to see things in a clearer light.

“I’m sorry, Scrubb,” she said presently. “I wasn’t fair. You have done all that–this term.”

“Then wash out last term if you can,” said Eustace. “I was a different chap then. I was–gosh! what a little tick I was.”

“Well, honestly, you were,” said Jill.

“You think there has been a change, then?” said Eustace.

“It’s not only me,” said Jill. “Everyone’s been saying so. They‘ve noticed it. Eleanor Blakiston heard Adela Pennyfather talking about it in our changing room yesterday. She said, ‘Someone’s got hold of that Scrubb kid. He’s quite unmanageable this term. We shall have to attend to him next.’”

Eustace gave a shudder. Everyone at Experiment House knew what it was like being “attended to” by Them.

Both children were quiet for a moment. The drops dripped off the laurel leaves.

“Why were you so different last term?” said Jill Presently.

“A lot of queer things happened to me in the hols,” said Eustace mysteriously.

“What sort of things?” asked Jill.

Eustace didn’t say anything for quite a long time. Then he said:

“Look here, Pole, you and I hate this place about as much as anybody can hate anything, don’t we?”

“Then I really think I can trust you.”

“Yes, but this is a really terrific secret. Pole, I say, are you good at believing things? I mean things that everyone here would laugh at?”

“Could you believe me if I said I’d been right out of the world–outside this world–last hols?”

“I wouldn’t know what you meant.”