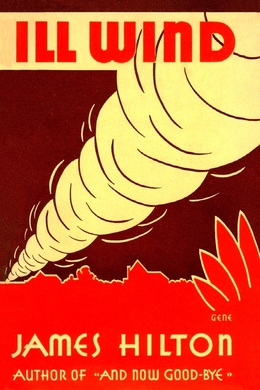 From cocktail rooms to the depp jungles, Ill Wind: Contango will keep you entertain with the classic “What If” genere novel with each chapter leading to a new character being introduced. “A common soldier, a child, a girl at the door of an inn, have changed the face of fortune, and almost of Nature.” “History seen from a distance produces the illusion that it is rational.” “To reflect how easily the course of things might have been different is to learn perspective and humility.” “The random element in the Universe always increases.”

“Curious, the way things do jump out of nothing. This affair seems to have been begun by a hat blowing off.”

To Gathergood, as he said this, sitting on his bungalow verandah at Cuava with the temperature over a hundred in the shade and his whole body perspiring with the slightest movement, there came the sudden realisation of unpopularity. He had been conscious of it, at times, before; but never quite so definitely. He wondered if the planters had been telling tales against him, but he did not trouble himself much with the possibility; it was far too hot–an hour for anything rather than unpleasant speculation. He added, stiffening his glance as he met the eyes of the man across the table-top: “Of course it’s bad enough, in the result, but I’m not so sure that as much underlies it as you think.”

“You mentioned something about a hat blowing off?”

“Yes, Morrison’s hat. He was walking down from the club after tiffin, and just there”–he pointed with a jerk of the head–“where the path curves round the cliff his hat blew into the sea. He called to a native down below on the quayside to get it for him–a young Cuavanese named Naung Lo–but the fellow didn’t hear him, apparently. Morrison then scrambled down the cliff himself and made a scene. That’s as far as we can get before the evidence begins to be conflicting.”

“A planter named Franklyn was with Morrison, I understand?”

“Yes. Of course it’s on Franklyn’s evidence that Naung Lo was arrested. He says Naung Lo pushed Morrison into the sea.”

“And I take it you accept this version of what happened in preference to Franklyn’s?”

“No, not altogether. I daresay Naung Lo may have pushed–I don’t see how, if there was a struggle, he could have avoided it.”

Gathergood was silent a moment. Then he replied, rather slowly: “It’s too hot to take you to the scene of the affair or you’d realise that Franklyn, being thirty yards away at least, may not have been in the best position for seeing exactly what did happen. Naturally he was indignant about the death of his friend.”

“You wish me to infer that his evidence is false?”

“By no means, Humphreys,” answered Gathergood sharply. “I don’t suggest anything of the kind. But Franklyn admits that he stayed on the path up above, while Morrison climbed down to the edge of the quay where the whole thing took place.”

“But he doesn’t admit that Morrison was drunk.”

“No. Drunkenness is perhaps a matter of opinion. I can only say that I should have called him drunk when he left the club–I was there and I saw him. But that, of course, was half an hour earlier. Some men quickly throw off the effects.”

A long silence followed, which Gathergood broke by adding: “I think I should point out also that Naung Lo is slight in build, while Morrison was a six-footer. It seems unlikely, on the face of it, that the smaller man would begin the attack, without weapons– and no weapons were found on or near him afterwards…. And, of course, Morrison’s death was in some sense an accident, anyhow–he certainly wouldn’t have drowned if his head hadn’t struck a stone that stunned him.”

“Franklyn went to the rescue, didn’t he?”

“Yes. And Naung Lo stood by and gave what help he could. A point in his favour, I should be inclined to think.”

“Well, now we’ve had all the points in his favour–unless there are some more–perhaps we can consider those against him. He’s been in prison, they tell me?”

“Yes, several times–for theft. I don’t claim that he’s a highly moral character in any way.”

“And he was once in the employ of Morrison, but got the sack?”

“Yes, Morrison had to sack a good many natives. So have all the planters round here, with rubber down to fourpence a pound. The biggest item of evidence against the youth–I’ll tell you to save you the trouble of finding it out for yourself–is that he’s undoubtedly been heard to utter threats against Morrison. Morrison thrashed him once, and he swore to get even with him. He probably deserved the thrashing–though, on the other hand, Morrison was rather noted for that sort of thing.”

“Well, it establishes a motive, doesn’t it?”

The two men, Gathergood the Agent and Humphreys the Vice-Consul from the mainland, faced each other again in a lengthy silence. Then Humphreys said: “Of course, Gathergood, people are rather expecting you to do something about it.”

The Agent replied quietly, scarcely moving a muscle in the almost intolerable noonday heat: “I’m doing what I can, Humphreys. I’m trying to find out if there were other witnesses of the affair.”