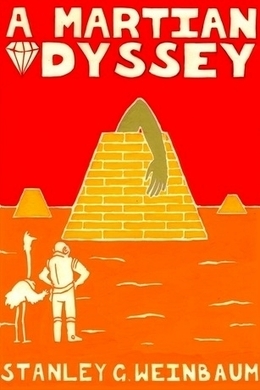 A four-man crew crash lands on Mars, and Dick Jarvis, who sets out on his own meets Tweel, a sympathetic creature who shows him the ways of the planet. A strange pyramid building creature, a tentacled ‘dream beast’, and broken record cart people. Check out for yourself why A Martian Odyssey came in 2nd in the best science fiction stories of all time, right behind Asimov’s Nightfall. This short story set the career of Stanley Weinbaum off like a bomb, since he wrote a story like none had done before: it was about an alien who is sentient and intelligent rather than a mindless barbarian. He also added the twist that despite the creature’s intelligence, it didn’t have human logic or reason. It was followed four months later by a sequel, Valley of Dreams.

Jarvis stretched himself as luxuriously as he could in the cramped general quarters of the Ares.

“Air you can breathe!” he exulted. “It feels as thick as soup after the thin stuff out there!” He nodded at the Martian landscape stretching flat and desolate in the light of the nearer moon, beyond the glass of the port.

The other three stared at him sympathetically–Putz, the engineer, Leroy, the biologist, and Harrison, the astronomer and captain of the expedition. Dick Jarvis was chemist of the famous crew, the Ares expedition, first human beings to set foot on the mysterious neighbor of the earth, the planet Mars. This, of course, was in the old days, less than twenty years after the mad American Doheny perfected the atomic blast at the cost of his life, and only a decade after the equally mad Cardoza rode on it to the moon. They were true pioneers, these four of the Ares. Except for a half-dozen moon expeditions and the ill-fated de Lancey flight aimed at the seductive orb of Venus, they were the first men to feel other gravity than earth’s, and certainly the first successful crew to leave the earth-moon system. And they deserved that success when one considers the difficulties and discomforts–the months spent in acclimatization chambers back on earth, learning to breathe the air as tenuous as that of Mars, the challenging of the void in the tiny rocket driven by the cranky reaction motors of the twenty-first century, and mostly the facing of an absolutely unknown world.

Jarvis stretched and fingered the raw and peeling tip of his frost-bitten nose. He sighed again contentedly.

“Well,” exploded Harrison abruptly, “are we going to hear what happened? You set out all shipshape in an auxiliary rocket, we don’t get a peep for ten days, and finally Putz here picks you out of a lunatic ant-heap with a freak ostrich as your pal! Spill it, man!”

“He means ‘spiel’,” explained Putz soberly. “It iss to tell.”

Jarvis met Harrison’s amused glance without the shadow of a smile. “That’s right, Karl,” he said in grave agreement with Putz. “Ich spiel es!” He grunted comfortably and began.

“According to orders,” he said, “I watched Karl here take off toward the North, and then I got into my flying sweat-box and headed South. You’ll remember, Cap–we had orders not to land, but just scout about for points of interest. I set the two cameras clicking and buzzed along, riding pretty high–about two thousand feet–for a couple of reasons. First, it gave the cameras a greater field, and second, the under-jets travel so far in this half-vacuum they call air here that they stir up dust if you move low.”

“We know all that from Putz,” grunted Harrison. “I wish you’d saved the films, though. They’d have paid the cost of this junket; remember how the public mobbed the first moon pictures?”

“The films are safe,” retorted Jarvis. “Well,” he resumed, “as I said, I buzzed along at a pretty good clip; just as we figured, the wings haven’t much lift in this air at less than a hundred miles per hour, and even then I had to use the under-jets.

“So, with the speed and the altitude and the blurring caused by the under-jets, the seeing wasn’t any too good. I could see enough, though, to distinguish that what I sailed over was just more of this grey plain that we’d been examining the whole week since our landing–same blobby growths and the same eternal carpet of crawling little plant-animals, or biopods, as Leroy calls them. So I sailed along, calling back my position every hour as instructed, and not knowing whether you heard me.”

“I did!” snapped Harrison.

“A hundred and fifty miles south,” continued Jarvis imperturbably, “the surface changed to a sort of low plateau, nothing but desert and orange-tinted sand. I figured that we were right in our guess, then, and this grey plain we dropped on was really the Mare Cimmerium which would make my orange desert the region called Xanthus. If I were right, I ought to hit another grey plain, the Mare Chronium in another couple of hundred miles, and then another orange desert, Thyle I or II. And so I did.”

“Putz verified our position a week and a half ago!” grumbled the captain. “Let’s get to the point.”

“Coming!” remarked Jarvis. “Twenty miles into Thyle–believe it or not–I crossed a canal!”

“Twenty of ‘em, if you call those heaps of mud cities!”

“Well,” observed Jarvis, “from here on I’ll be telling a few things Putz didn’t see!” He rubbed his tingling nose, and continued. “I knew that I had sixteen hours of daylight at this season, so eight hours–eight hundred miles–from here, I decided to turn back. I was still over Thyle, whether I or II I’m not sure, not more than twenty-five miles into it. And right there, Putz’s pet motor quit!”

“Quit? How?” Putz was solicitous.