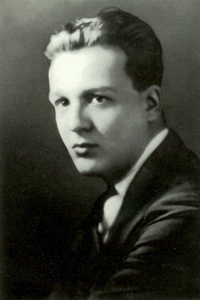 A four-man crew crash lands on Mars, and Dick Jarvis, who sets out on his own meets Tweel, a sympathetic creature who shows him the ways of the planet. ...read more »

After a worldwide plague breaks civilization, Joaquin Smith and his sister build an empire up the Mississippi Valley. Who would be brave or foolish enou...read more »

Dan Burke steps out of a stuffy New York City party hoping to get some air and peace in Central Park, but instead he meets a gnomelike man who asks him,...read more »

Civilization had died screaming in a blaze of nuclear and biological warfare. Gradually, during the Dark Centuries that followed, secrets were re-discov...read more »

Pat is a beautiful young woman with many admirers. Nick is a young man with a secret. When his dark side interferes with their burgeoning love, things t...read more »

The New Adam finds himself not in Eden, but in a crowded world of men and women who look like him but who cannot comprehend his powers or his unique men...read more »

The, self-aclaimed “great”, Haskel van Manderpootz has been “cheated” out of the coveted Morrell Award and unable to accept of life of modesty and in th...read more »

‘A pair of lunatics, you two,’ observed Harrison. He squinted through the port at the gray gloom of the Mare Cimmerium. ‘There comes the sun.’ He paused...read more »