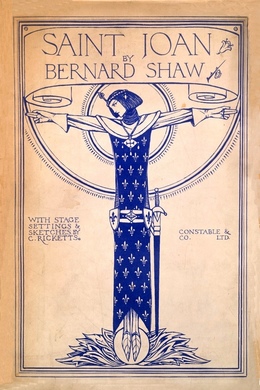 A Chronicle Play in Six Scenes and an Epilogue

Shaw reaches the height of his fame as a dramatist with the release of Saint Joan. Fascinated by the story of Joan of Arc (canonized in 1920), but unhappy with “the whitewash which disfigures her beyond recognition,” he presents a realistic Joan: proud, intolerant, naïve, foolhardy, always brave-a rebel who challenged the conventions and values of her day.

A fine spring morning on the river Meuse, between Lorraine and Champagne, in the year 1429 A.D., in the castle of Vaucouleurs.

Captain Robert de Baudricourt, a military squire, handsome and physically energetic, but with no will of his own, is disguising that defect in his usual fashion by storming terribly at his steward, a trodden worm, scanty of flesh, scanty of hair, who might be any age from 18 to 55, being the sort of man whom age cannot wither because he has never bloomed.

The two are in a sunny stone chamber on the first floor of the castle. At a plain strong oak table, seated in chair to match, the captain presents his left profile. The steward stands facing him at the other side of the table, if so deprecatory a stance as his can be called standing. The mullioned thirteenth-century window is open behind him. Near it in the corner is a turret with a narrow arched doorway leading to a winding stair which descends to the courtyard. There is a stout fourlegged stool under the table, and a wooden chest under the window.

ROBERT. No eggs! No eggs!! Thousand thunders, man, what do you mean by no eggs?

STEWARD. Sir: it is not my fault. It is the act of God.

ROBERT. Blasphemy. You tell me there are no eggs; and you blame your Maker for it.

STEWARD. Sir: what can I do? I cannot lay eggs.

ROBERT [sarcastic] Ha! You jest about it.

STEWARD. No, sir, God knows. We all have to go without eggs just as you have, sir. The hens will not lay.

ROBERT. Indeed! [Rising] Now listen to me, you.

ROBERT. What am I?

STEWARD. What are you, sir?

ROBERT [coming at him] Yes: what am I? Am I Robert, squire of Baudricourt and captain of this castle of Vaucouleurs; or am I a cowboy?

STEWARD. Oh, sir, you know you are a greater man here than the king himself.

ROBERT. Precisely. And now, do you know what you are?

STEWARD. I am nobody, sir, except that I have the honor to be your steward.

ROBERT [driving him to the wall, adjective by adjective] You have not only the honor of being my steward, but the privilege of being the worst, most incompetent, drivelling snivelling jibbering jabbering idiot of a steward in France. [He strides back to the table].

STEWARD [cowering on the chest] Yes, sir: to a great man like you I must seem like that.

STEWARD [coming to him deprecatingly] Oh, sir: you always give my most innocent words such a turn!

ROBERT. I will give your neck a turn if you dare tell me when I ask you how many eggs there are that you cannot lay any.

ROBERT. No: not oh sir, oh sir, but no sir, no sir. My three Barbary hens and the black are the best layers in Champagne. And you come and tell me that there are no eggs! Who stole them? Tell me that, before I kick you out through the castle gate for a liar and a seller of my goods to thieves. The milk was short yesterday, too: do not forget that.

STEWARD [desperate] I know, sir. I know only too well. There is no milk: there are no eggs: tomorrow there will be nothing.

ROBERT. Nothing! You will steal the lot: eh?

STEWARD. No, sir: nobody will steal anything. But there is a spell on us: we are bewitched.

ROBERT. That story is not good enough for me. Robert de Baudricourt burns witches and hangs thieves. Go. Bring me four dozen eggs and two gallons of milk here in this room before noon, or Heaven have mercy on your bones! I will teach you to make a fool of me. [He resumes his seat with an air of finality].

STEWARD. Sir: I tell you there are no eggs. There will be none– not if you were to kill me for it–as long as The Maid is at the door.

ROBERT. The Maid! What maid? What are you talking about?

STEWARD. The girl from Lorraine, sir. From Domremy.

ROBERT [rising in fearful wrath] Thirty thousand thunders! Fifty thousand devils! Do you mean to say that that girl, who had the impudence to ask to see me two days ago, and whom I told you to send back to her father with my orders that he was to give her a good hiding, is here still?

STEWARD. I have told her to go, sir. She wont.

ROBERT. I did not tell you to tell her to go: I told you to throw her out. You have fifty men-at-arms and a dozen lumps of able- bodied servants to carry out my orders. Are they afraid of her?

STEWARD. She is so positive, sir.

ROBERT [seizing him by the scruff of the neck] Positive! Now see here. I am going to throw you downstairs.

ROBERT. Well, stop me by being positive. It’s quite easy: any slut of a girl can do it.

STEWARD [hanging limp in his hands] Sir, sir: you cannot get rid of her by throwing me out. [Robert has to let him drop. He squats on his knees on the floor, contemplating his master resignedly]. You see, sir, you are much more positive than I am. But so is she.