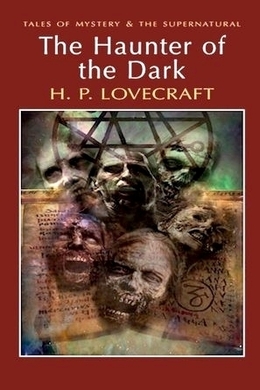 The Haunter Of The Dark

When you open this book you will be lost - lost in a world of dreadful nightmare brought to screaming life by the century’s greatest master of adult fantasy and horror. ‘They were removing the stones quietly, one by one, from the centuried wall. And then, as the breach became large enough, they came out into the laboratory in single file; led by a stalking thing with a beautiful head made of wax.’

Cautious investigators will hesitate to challenge the common belief that Robert Blake was killed by lightning, or by some profound nervous shock derived from an electrical discharge. It is true that the window he faced was unbroken, but nature has shown herself capable of many freakish performances. The expression on his face may easily have arisen from some obscure muscular source unrelated to anything he saw, while the entries in his diary are clearly the result of a fantastic imagination aroused by certain local superstitions and by certain old matters he had uncovered. As for the anomalous conditions at the deserted church of Federal Hill—the shrewd analyst is not slow in attributing them to some charlatanry, conscious or unconscious, with at least some of which Blake was secretly connected.

For after all, the victim was a writer and painter wholly devoted to the field of myth, dream, terror, and superstition, and avid in his quest for scenes and effects of a bizarre, spectral sort. His earlier stay in the city —a visit to a strange old man as deeply given to occult and forbidden lore as he—had ended amidst death and flame, and it must have been some morbid instinct which drew him back from his home in Milwaukee. He may have known of the old stories despite his statements to the contrary in the diary, and his death may have nipped in the bud some stupendous hoax destined to have a literary reflection.

Among those, however, who have examined and correlated all this evidence, there remain several who cling to less rational and commonplace theories. They are inclined to take much of Blake’s diary at its face value, and point significantly to certain facts such as the undoubted genuineness of the old church record, the verified existence of the disliked and unorthodox Starry Wisdom sect prior to 1877, the recorded disappearance of an inquisitive reporter named Edwin M. Lillibridge in 1893, and—above all—the look of monstrous, transfiguring fear on the face of the young writer when he died. It was one of these believers who, moved to fanatical extremes, threw into the bay the curiously angled stone and its strangely adorned metal box found in the old church steeple—the black windowless steeple, and not the tower where Blake’s diary said those things originally were. Though widely censured both officially and unofficially, this man—a reputable physician with a taste for odd folklore—averred that he had rid the earth of something too dangerous to rest upon it.

Between these two schools of opinion the reader must judge for himself. The papers have given the tangible details from a skeptical angle, leaving for others the drawing of the picture as Robert Blake saw it—or thought he saw it—or pretended to see it. Now studying the diary closely, dispassionately, and at leisure, let us summarize the dark chain of events from the expressed point of view of their chief actor.

Young Blake returned to Providence in the winter of 1934-5, taking the upper floor of a venerable dwelling in a grassy court off College Street —on the crest of the great eastward hill near the Brown University campus and behind the marble John Hay Library. It was a cosy and fascinating place, in a little garden oasis of village-like antiquity where huge, friendly cats sunned themselves atop a convenient shed. The square Georgian house had a monitor roof, classic doorway with fan carving, small-paned windows, and all the other earmarks of early nineteenth century workmanship. Inside were six-paneled doors, wide floor-boards, a curving colonial staircase, white Adam-period mantels, and a rear set of rooms three steps below the general level.

Blake’s study, a large southwest chamber, overlooked the front garden on one side, while its west windows—before one of which he had his desk —faced off from the brow of the hill and commanded a splendid view of the lower town’s outspread roofs and of the mystical sunsets that flamed behind them. On the far horizon were the open countryside’s purple slopes. Against these, some two miles away, rose the spectral hump of Federal Hill, bristling with huddled roofs and steeples whose remote outlines wavered mysteriously, taking fantastic forms as the smoke of the city swirled up and enmeshed them. Blake had a curious sense that he was looking upon some unknown, ethereal world which might or might not vanish in dream if ever he tried to seek it out and enter it in person.