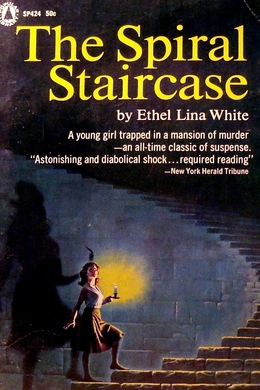 As Professor Sebastian Warren battens down the shutters and locks all the doors of their isolated country house, the eight occupants start to feel safe. Somewhere outside lurks a murderer of young girls, the latest only an earshot away. Is there really safety in numbers and what happens when their numbers start to dwindle? The novel was adapted for a radio production starring Helen Hayes, and in 1946 director Robert Siodmak took it to the big screen, under the title The Spiral Staircase.

Helen realised that she had walked too far just as day-light was beginning to fade.

As she looked around her, she was struck by the desolation of the country. During her long walk, she had met no one, and had passed no cottage. The high-banked lanes, which blocked her view, were little better than steep mudslides. On either side of her rose the hills–barren sepia mounds, blurred by a fine spit of rain.

Over all hung a heavy sense of expectancy, as though the valley awaited some disaster. In the distance–too far away to be even a threat–rumbled faint, lumpy sounds of thunder.

Fortunately Helen was a realist, used to facing hard economic facts, and not prone to self-pity. Of soaring spirit, yet possessed of sound common sense, she believed that those thinly-veiled pitfalls over hell–heaviness of body and darkness of spirit–could be explained away by liver or atmosphere.

Small and pale as a slip of crescent moon, she was only redeemed from insignificance by her bush of light-red springy hair. But, in spite of her unostentatious appearance, she throbbed with a passion for life, expressed in an expectancy of the future, which made her welcome each fresh day, and shred its interest from every hour and minute.

As a child, she pestered strangers to tell her the time, not from a mere dull wish to know whether it were early or late, but from a specialised curiosity to see their watches. This habit persisted when she had to earn her own living under the roofs of fortunate people who possessed houses of their own.

Her one dread was being out of work. She could estimate, therefore, the scores of replies which had probably been received as a result of the advertisement for a lady-help at Professor Warren’s country house; and, as soon as she arrived at the Summit, she realised that its very loneliness had helped to remove her from the ranks of the unemployed.

It was tucked away in a corner, somewhere at the union of three counties, on the border-line between England and Wales. The nearest town was twenty-two miles away–the nearest village, twelve. No maid would stay at such a forsaken pocket–a pocket with a hole in it–through which dribbled a chronic shrinkage of domestic labour.

Mrs. Oates, who, with her husband, helped to fill the breach, summed up the situation to Helen, when they met, by appointment, at the Ladies Waiting Room, at Hereford.

“I told Miss Warren as she’d have to get a lady. No one else would put up with it.”

Helen agreed that ladies were a drug in the market. She had enjoyed some months of enforced leisure, and was only too grateful for the security of any home, after weeks of stringent economy–since “starvation” is a word not found in a lady’s vocabulary. Apart from the essential loneliness of the locality, it was an excellent post, for she had not only a nice room and good food, but she took her meals with the family.

The last fact counted, with her, for more than a gesture of consideration, since it gave her the chance to study her employers. She was lucky in being able to project herself into their lives, for she could rarely afford a seat at the Pictures, and had to extract her entertainment from the raw material of life.

The Warren family possessed some of the elements of drama. The Professor, who was a widow, and his sister and housekeeper–Miss Warren–were middle-aged to elderly. Helen classified them as definite types, academic, frigid, and well-bred, but otherwise devoid of the vital human interest.

Their step-mother, however, old Lady Warren–the invalid in the blue room–was of richer mould. Blood and mud had been used in her mixture, and the whole was churned up, thrice daily, by a dose of evil temper. She was the terror of the household; only yesterday, she had flung a basin of gruel at her nurse’s head.

It had been her natural and ladylike protest against this substitute for the rare steak, which she preferred, but was unable to chew. As her aim was excellent, it had achieved the desired result; that morning Oates had driven the departing nurse into the town, and was coming back, in the evening, with a fresh target.

Helen, who had not yet been brought into contact with the old lady, rather admired her spirit. The household was waiting for her to die, but she still called the tune. Every morning, Death knocked politely on the door of the blue room; and Lady Warren saluted him in her customary fashion, with a thumb to her nose.

Besides this low-comedy relief, Helen suspected the triangle situation, as represented by the Professor’s son, his daughter-in-law, and the resident pupil, whom the Professor was coaching for the Indian Civil Service. The son–a clever, ugly youth–was violently and aggressively in love with his wife, Simone. She was an unusually attractive girl, with money of her own, and a wanton streak in her composition.