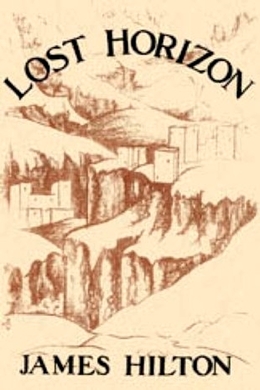 While attempting to escape a civil war, four people are kidnapped and transported to the Tibetan mountains. After their plane crashes, they are found by a mysterious Chinese man. He leads them to a monastery hidden in “the valley of the blue moon” – a land of mystery and matchless beauty where life is lived in tranquil wonder, beyond the grasp of a doomed world. It is here, in Shangri-La, where destinies will be discovered and the meaning of paradise will be unveiled.

During that third week of May the situation in Baskul had become much worse and, on the 20th, air force machines arrived by arrangement from Peshawar to evacuate the white residents. These numbered about eighty, and most were safely transported across the mountains in troop carriers. A few miscellaneous aircraft were also employed, among them being a cabin machine lent by the maharajah of Chandrapur. In this, about 10 a.m., four passengers embarked: Miss Roberta Brinklow, of the Eastern Mission; Henry D. Barnard, an American; Hugh Conway, H.M. Consul; and Captain Charles Mallinson, H.M. Vice Consul.

These names are as they appeared later in Indian and British newspapers.

Conway was thirty-seven. He had been at Baskul for two years, in a job which now, in the light of events, could be regarded as a persistent backing of the wrong horse. A stage of his life was finished; in a few weeks’ time, or perhaps after a few months’ leave in England, he would be sent somewhere else. Tokyo or Teheran, Manila or Muscat; people in his profession never knew what was coming. He had been ten years in the Consular Service, long enough to assess his own chances as shrewdly as he was apt to do those of others. He knew that the plums were not for him; but it was genuinely consoling, and not merely sour grapes, to reflect that he had no taste for plums. He preferred the less formal and more picturesque jobs that were on offer, and as these were often not good ones, it had doubtless seemed to others that he was playing his cards rather badly. Actually, he felt he had played them rather well; he had had a varied and moderately enjoyable decade.

He was tall, deeply bronzed, with brown short-cropped hair and slate-blue eyes. He was inclined to look severe and brooding until he laughed, and then (but it happened not so very often) he looked boyish. There was a slight nervous twitch near the left eye which was usually noticeable when he worked too hard or drank too much, and as he had been packing and destroying documents throughout the whole of the day and night preceding the evacuation, the twitch was very conspicuous when he climbed into the aeroplane. He was tired out, and overwhelmingly glad that he had contrived to be sent in the maharajah’s luxurious airliner instead of in one of the crowded troop carriers. He spread himself indulgently in the basket seat as the plane soared aloft. He was the sort of man who, being used to major hardships, expected minor comforts by way of compensation. Cheerfully he might endure the rigors of the road to Samarkand, but from London to Paris he would spend his last tenner on the Golden Arrow.

It was after the flight had lasted more than an hour that Mallinson said he thought the pilot wasn’t keeping a straight course. Mallinson sat immediately in front. He was a youngster in his middle twenties, pink-cheeked, intelligent without being intellectual, beset with public school limitations, but also with their excellences. Failure to pass an examination was the chief cause of his being sent to Baskul, where Conway had had six months of his company and had grown to like him.

But Conway did not want to make the effort that an aeroplane conversation demands. He opened his eyes drowsily and replied that whatever the course taken, the pilot presumably knew best.

Half an hour later, when weariness and the drone of the engine had lulled him nearly to sleep, Mallinson disturbed him again. “I say, Conway, I thought Fenner was piloting us?”

“The chap turned his head just now and I’ll swear it wasn’t he.”

“It’s hard to tell, through that glass panel.”

“Well, then, it must be someone else. I don’t see that it matters.”

“But Fenner told me definitely that he was taking this machine.”

“They must have changed their minds and given him one of the others.”

“My dear boy, how should I know? You don’t suppose I’ve memorized the face of every flight lieutenant in the air force, do you?”

“I know a good many of them, anyway, but I don’t recognize this fellow.”

“Then he must belong to the minority whom you don’t know.” Conway smiled and added: “When we arrive in Peshawar very soon you can make his acquaintance and ask him all about himself.”

“At this rate we shan’t get to Peshawar at all. The man’s right off his course. And I’m not surprised, either–flying so damned high he can’t see where he is.”