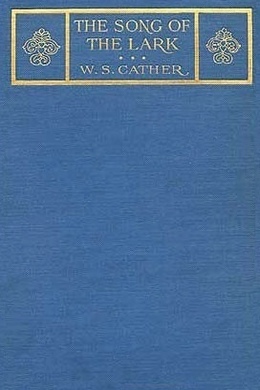 Song of the Lark

Set in the 1890s in Moonstone, a fictional town located in Colorado, The Song of the Lark is the self-portrait of an artist in the making. The story revolves around an ambitious young heroine, Thea Kronborg, who leaves her hometown to go to the big city to fulfill her dream of becoming a well-trained pianist, a better piano teacher. When her piano instructor hears her voice, he realizes that this is her true artistic gift. He encourages her to pursue her vocal training instead of piano saying … “your voice is worth all that you can put into it. I have not come to this decision rashly.” The novel captures Thea’s independent-mindedness, her strong work ethic, and her ascent to her highest achievement. At each step along the way, her realization of the mediocrity of her peers propels her to greater levels of accomplishment, but in the course of her ascent she must discard those relationships which no longer serve her. (source: Wikipedia)

Dr. Howard Archie had just come up from a game of pool with the Jewish clothier and two traveling men who happened to be staying overnight in Moonstone. His offices were in the Duke Block, over the drug store. Larry, the doctor’s man, had lit the overhead light in the waiting–room and the double student’s lamp on the desk in the study. The isinglass sides of the hard–coal burner were aglow, and the air in the study was so hot that as he came in the doctor opened the door into his little operating–room, where there was no stove. The waiting room was carpeted and stiffly furnished, something like a country parlor. The study had worn, unpainted floors, but there was a look of winter comfort about it. The doctor’s flat–top desk was large and well made; the papers were in orderly piles, under glass weights. Behind the stove a wide bookcase, with double glass doors, reached from the floor to the ceiling. It was filled with medical books of every thickness and color. On the top shelf stood a long row of thirty or forty volumes, bound all alike in dark mottled board covers, with imitation leather backs.

As the doctor in New England villages is proverbially old, so the doctor in small Colorado towns twenty–five years ago was generally young. Dr. Archie was barely thirty. He was tall, with massive shoulders which he held stiffly, and a large, well–shaped head. He was a distinguished–looking man, for that part of the world, at least.

There was something individual in the way in which his reddish–brown hair, parted cleanly at the side, bushed over his high forehead. His nose was straight and thick, and his eyes were intelligent. He wore a curly, reddish mustache and an imperial, cut trimly, which made him look a little like the pictures of Napoleon III. His hands were large and well kept, but ruggedly formed, and the backs were shaded with crinkly reddish hair. He wore a blue suit of woolly, wide–waled serge; the traveling men had known at a glance that it was made by a Denver tailor. The doctor was always well dressed.

Dr. Archie turned up the student’s lamp and sat down in the swivel chair before his desk. He sat uneasily, beating a tattoo on his knees with his fingers, and looked about him as if he were bored. He glanced at his watch, then absently took from his pocket a bunch of small keys, selected one and looked at it. A contemptuous smile, barely perceptible, played on his lips, but his eyes remained meditative. Behind the door that led into the hall, under his buffalo–skin driving–coat, was a locked cupboard. This the doctor opened mechanically, kicking aside a pile of muddy overshoes. Inside, on the shelves, were whiskey glasses and decanters, lemons, sugar, and bitters. Hearing a step in the empty, echoing hall without, the doctor closed the cupboard again, snapping the Yale lock. The door of the waiting–room opened, a man entered and came on into the consulting–room.

His visitor was a tall, loosely built man, with a thin brown beard, streaked with gray. He wore a frock coat, a broad–brimmed black hat, a white lawn necktie, and steel rimmed spectacles. Altogether there was a pretentious and important air about him, as he lifted the skirts of his coat and sat down.

“Good–evening, doctor. Can you step around to the house with me? I think Mrs. Kronborg will need you this evening.” This was said with profound gravity and, curiously enough, with a slight embarrassment.

“Any hurry?” the doctor asked over his shoulder as he went into his operating–room.

Mr. Kronborg coughed behind his hand, and contracted his brows. His face threatened at every moment to break into a smile of foolish excitement. He controlled it only by calling upon his habitual pulpit manner. “Well, I think it would be as well to go immediately. Mrs. Kronborg will be more comfortable if you are there. She has been suffering for some time.”

The doctor came back and threw a black bag upon his desk. He wrote some instructions for his man on a prescription pad and then drew on his overcoat. “All ready,” he announced, putting out his lamp. Mr. Kronborg rose and they tramped through the empty hall and down the stairway to the street. The drug store below was dark, and the saloon next door was just closing. Every other light on Main Street was out.

On either side of the road and at the outer edge of the board sidewalk, the snow had been shoveled into breastworks. The town looked small and black, flattened down in the snow, muffled and all but extinguished. Overhead the stars shone gloriously. It was impossible not to notice them. The air was so clear that the white sand hills to the east of Moonstone gleamed softly.