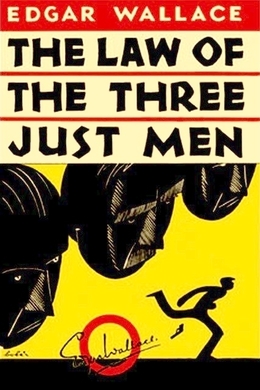 The Law of the Three Just Men

Thrilling tales from the secret files of the world’s most famous vigilantes. An honest workingman tries to intimidate his wife’s blackmailer and winds up in prison. Only the organization known as the Four Just Men can save him–by taking the law into their own hands. A noted professor is found strangled to death in his laboratory, and the prime suspect is his sinister-looking son. When Manfred and Gonsalez realize that the police have not only the wrong man, but the wrong murder method, they set a trap for the real killer. A chance encounter on a golf course reveals a plot to eradicate one of the earth’s most innocent and necessary creatures, and Gonsalez vows to stop the mad scientist in charge, whatever it takes.With the assassination of Sir Philip Ramon and the war against the Red Hundred years behind them, Manfred, Gonsalez, and Poiccart have settled into lives of scholarship and leisure. That does not mean, however, that they can let injustice stand. Wherever these three principled men go, they carry with them the memory of the original fourth member of their group, who was gunned down in a Bordeaux cafe decades ago. In his honor, and in defense of innocence and integrity, they will act–swiftly and without remorse.

As The Megaphone once said, in its most pessimistic and wondering mood, recording rather than condemning the strangeness of the time:

“Even The Four Just Men have become a respectable institution. Not more than fifteen years ago we spoke of them as ‘a criminal organization’; rewards were offered for their arrest…today you may turn into Curzon Street and find a silver triangle affixed to the sedate door which marks their professional headquarters…The hunted and reviled have become a most exclusive detective agency…We can only hope that their somewhat drastic methods of other times have been considerably modified.”

It is sometimes a dangerous thing to watch a possible watcher.

‘What is Mr Lewis Lethersohn afraid of?’ asked Manfred, as he cracked an egg at breakfast. His handsome, clean-shaven face was tanned a teak-brown, for he was newly back from the sun and snows of Switzerland.

Leon Gonsalez sat opposite, absorbed in The Times; at the end of the table was Raymond Poiccart, heavy-featured and saturnine. Other pens than mine have described his qualities and his passion for growing vegetables.

He raised his eyes to Gonsalez.

‘Is he the gentleman who has had this house watched for the past month?’ he asked.

A smile quivered on Leon’s lips as he folded the newspaper neatly.

‘He is the gentleman–I’m interviewing him this morning,’ he said. ‘In the meantime, the sleuth hounds have been withdrawn–they were employed by the Ottis Detective Agency.’

‘If he is watching us, he has a bad conscience,’ said Poiccart, nodding slowly. ‘I shall be interested to hear all about this.’

‘Mr Lethersohn will see you in the library,’ said the man–he seemed; thought Leon, rather conscious of his own magnificence.

A gorgeous house this, with costly furnishings and lavish decorations. As he mounted the wide stairs he had a glimpse of a beautiful woman passing across the landing. One disdainful glance she threw in his direction and passed, leaving behind her the faint fragrance of some exotic perfume.

The room into which he was shown might have been mistaken for a bedroom, with its bric-a-brac and its beauty of appointments.

Mr Lethersohn rose from behind the Empire writing table and offered a white hand. He was thin, rather bald, and there was a suggestion of the scholar in his lined face.

‘Mr Gonsalez?’ His voice was thin and not particularly pleasant. ‘Won’t you sit down? I had your inquiry–there seems to be some mistake.’

He had resumed his own seat. Though he might endeavour, to cover up his uneasiness by this cold attitude of his, he could not quite hide his perturbation.

‘I know you, of course–but it is ridiculous that I should set men to watch your house. Why?’

Gonsalez was watching him intently.

‘That is what I have come to learn,’ he said, ‘and I think it would be fairest to tell you that there is no doubt that you are watching us. We know the agency you employed–we know the fees you have paid and the instructions you have given. The only question is, why?’

Mr Lethersohn moved uncomfortably and smiled. ‘Really…I suppose there is no wisdom in denying that I did employ detectives. The truth is, the Four Just Men is rather a formidable organization–and–er–Well, I am a rich man….’

He was at a loss how to go on.

The interview ended lamely with polite assurances on either side. Leon Gonsalez went back to Curzon Street a very thoughtful man.

‘He’s afraid of somebody consulting us, and the detective people have been employed to head off that somebody. Now who?’

The next evening brought the answer.

It was a grey April night, chill and moist. The woman who walked slowly down Curzon Street, examining the numbers on the doors, was an object of suspicion to the policeman standing on Claridge’s corner. She was in the region of thirty, rather slim, under the worn and soddened coat. Her face was faded and a little pinched. ‘Pretty once,’ mused Leon Gonsalez, observing her from behind the net curtain that covered the window. ‘A working woman without a thought beyond keeping her body and soul together.’

He had time enough to observe her, since she stood for a long time by the kerb, looking up and down the street hopelessly.

‘Notice the absence of any kind of luring finery–and this is the hour when even the poorest find a scarf or a pair of gloves.’

Manfred rose from the table where he had been taking his frugal meal and joined the keen-faced observer.

As he was speaking, the woman had turned, made a brief scrutiny of the front door…They heard the bell ring.