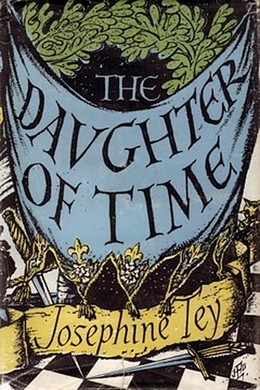 The Daughter of Time

Voted greatest mystery novel of all time by the Crime Writers’ Association in 1990, Josephine Tey recreates one of history’s most famous—and vicious—crimes in her classic bestselling novel, a must read for connoisseurs of fiction. Inspector Alan Grant of Scotland Yard, recuperating from a broken leg, becomes fascinated with a contemporary portrait of Richard III that bears no resemblance to the Wicked Uncle of history. Could such a sensitive, noble face actually belong to one of the world’s most heinous villains—a venomous hunchback who may have killed his brother’s children to make his crown secure? Or could Richard have been the victim, turned into a monster by the usurpers of England’s throne? Grant determines to find out once and for all, with the help of the British Museum and an American scholar, what kind of man Richard Plantagenet really was and who killed the Little Princes in the Tower. The Daughter of Time is an ingeniously plotted, beautifully written, and suspenseful tale, a supreme achievement from one of mystery writing’s most gifted masters.

Grant lay on his high white cot and stared at the ceiling. Stared at it with loathing. He knew by heart every last minute crack on its nice clean surface. He had made maps of the ceiling and gone exploring on them; rivers, islands, and continents. He had made guessing games of it and discovered hidden objects; faces, birds, and fishes. He had made mathematical calculations of it and re-discovered his childhood; theorems, angles, triangles. There was practically nothing else he could do but look at it. He hated the sight of it.

He had suggested to The Midget that she might turn his bed round a little so that he could have a new patch of ceiling to explore. But it seemed that that would spoil the symmetry of the room, and in hospitals symmetry ranked just a short head behind cleanliness and a whole length in front of Godliness. Anything out of the parallel was hospital profanity. Why didn’t he read? she asked. Why didn’t he go on reading some of those expensive brand-new novels that his friends kept on bringing him.

‘There are far too many people born into the world, and far too many words written. Millions and millions of them pouring from the presses every minute. It’s a horrible thought.’

‘You sound constipated,’ said The Midget.

The Midget was Nurse Ingham, and she was in sober fact a very nice five-feet two, with everything in just proportion. Grant called her The Midget to compensate himself for being bossed around by a piece of Dresden china which he could pick up in one hand. When he was on his feet, that is to say. It was not only that she told him what he might or might not do, but she dealt with his six-feet-odd with an off-hand ease that Grant found humiliating. Weights meant nothing, apparently, to The Midget. She tossed mattresses around with the absent-minded grace of a plate spinner. When she was off-duty he was attended to by The Amazon, a goddess with arms like the limb of a beech tree. The Amazon was Nurse Darroll, who came from Gloucestershire and was homesick each daffodil season. (The Midget came from Lytham St Anne’s, and there was no daffodil nonsense about her.) She had large soft hands and large soft cow’s eyes and she always looked very sorry for you, but the slightest physical exertion set her breathing like a suction-pump. On the whole Grant found it even more humiliating to be treated as a dead weight than to be treated as if he was no weight at all.

Grant was bed-borne, and a charge on The Midget and The Amazon, because he had fallen through a trap-door. This, of course, was the absolute in humiliation; compared with which the heavings of The Amazon and the light slingings of The Midget were a mere corollary. To fall through a trap-door was the ultimate in absurdity; pantomimic, bathetic, grotesque. At the moment of his disappearance from the normal level of perambulation he had been in hot pursuit of Benny Skoll, and the fact that Benny had careered round the next corner slap into the arms of Sergeant Williams provided the one small crumb of comfort in an intolerable situation.

Grant stopped staring at the ceiling, and slid his eyes sideways at the pile of books on his bedside table; the gay expensive pile that The Midget had been urging on his attention. The top one, with the pretty picture of Valetta in unlikely pink, was Lavinia Fitch’s annual account of a blameless heroine’s tribulations. In view of the representation of the Grand Harbour on the cover, the present Valerie or Angela or Cecile or Denise must be a naval wife. He had opened the book only to read the kind message that Lavinia had written inside.

The Sweat and the Furrow was Silas Weekley being earthy and spade-conscious all over seven hundred pages. The situation, to judge from the first paragraph, had not materially changed since Silas’s last book: mother lying-in with her eleventh upstairs, father laid-out after his ninth downstairs, eldest son lying to the Government in the cow-shed, eldest daughter lying with her lover in the hay-loft, everyone else lying low in the barn. The rain dripped from the thatch, and the manure steamed in the midden. Silas never omitted the manure. It was not Silas’s fault that its steam provided the only up-rising element in the picture. If Silas could have discovered a brand of steam that steamed downwards, Silas would have introduced it.