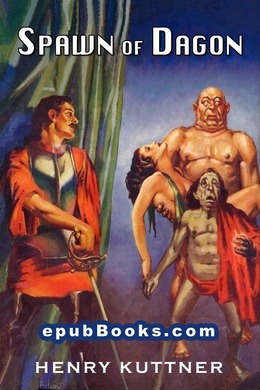 The Spawn Of Dagon

An eldritch, fearsome tale of the worship of the fish-god in the ancient world, and the prowess of a doughty swordsman in old Atlantis. Lycon and Elak embark on an adventure to kill the great wizard of Atlantis, but not all is what it seems!

Two streams of blood trickled slowly across the rough boards of the floor. One of them emerged from a gaping wound in the throat of a prostrate, armor-clad body; the other dripped from a chink in the battered cuirass, and the swaying light of a hanging lamp cast grotesque shadows over the corpse and the two men who crouched on their hams watching it. They were both very drunk. One of them, a tall, extremely slender man whose bronzed body seemed boneless, so supple was it, murmured:

“I win, Lycon. The blood wavers strangely, but the stream I spilt will reach this crack first.” He indicated a space between two planks with the point of his rapier.

Lycon’s child-like eyes widened in astonishment. He was short, thick-set, with a remarkably simian face set atop his broad shoulders. He swayed slightly as he gasped, “By Ishtar! The blood runs up-hill!”

Elak, the slender man, chuckled. “After all the mead you swilled the ocean might run up-hill. Well, the wager’s won; I get the loot.” He got up and stepped over to the dead man. Swiftly he searched him, and suddenly muttered an explosive curse. “The swine’s as bare as a Bacchic vestal! He has no purse.”

Lycon smiled broadly and looked more than ever like an undersized hairless ape. “The gods watch over me,” he said in satisfaction.

“Of all the millions in Atlantis you had to pick a fight with a pauper,” Elak groaned: “Now we’ll have to flee San-Mu, as your quarrels have forced us to flee Poseidonia and Kornak. And the San-Mu mead is the best in the land. If you had to cause trouble, why not choose a fat usurer? We’d have been paid for our trouble, then, at least.”

“The gods watch over me,” Lycon reiterated, leaning forward and then rocking back, chuckling to him-self. He leaned too far and fell on his nose, where he remained without moving. Something dropped from the bosom of his tunic and fell with a metallic sound to the oaken floor. Lycon snored.

Elak, smiling unpleasantly, appropriated the purse and investigated it& contents. “Your fingers are swifter than mine,” he told the recumbent Lycon, “but I can hold more mead than you. Next rime don’t try to cheat one who has more brains in his big toe than you have in all your misshapen body. Scavenging little ape! Get up; the innkeeper is returning with soldiers.”

He thrust the purse into the wallet at his belt and kicked Lycon heartily, but the small thief failed to awaken. Cursing with a will, Elak hoisted the body of the other to his shoulders and staggered toward the back of the tavern. The distant sound of shouting from the street outside grew louder, and Elak thought he could hear the querulous complaints of the innkeeper.

“There will be a reckoning, Lycon!” he promised bitterly. “Ishtar, yes! You’ll learn—-“

He pushed through a golden drapery and hurried along a corridor–kicked open an oaken door and came out in the alley behind the tavern. Above, cold stars glittered frostily, and an icy wind blew on Elak’s sweating face, sobering him somewhat.

Lycon stirred and writhed in his arms. “More grog!” he muttered. “Oh gods! Is there no more grog?” A maudlin tear fell hotly on Elak’s neck, and the latter for a moment entertained the not unpleasant idea of dropping Lycon and leaving him for the irate guards. The soldiers of San-Mu were not renowned for their soft-heartedness, and tales of what they sometimes did to their captives were unpleasantly explicit.

However, he ran along the alley instead, blundered into a brawny form that sprang out of the darkness abruptly, and saw a snarling, bearded face indistinct in the vague starlight. He dropped Lycon and whipped out his rapier. Already the soldier was plunging forward, his great sword rushing down.

Then it happened. Elak saw the guard’s mouth open in a square of amazement, saw horror spring into the cold eyes. The man’s face was a mask of abysmal fear. He flung himself back desperately–the sword-tip just missed Elak’s face.

The soldier raced away into the shadows.

With a snake-like movement Elak turned, rapier ready. He caught a blur of swift motion. The man facing him had lifted quick hands to his face, and dropped them as suddenly. But there was no menace in the gesture. Nevertheless Elak felt a chill of inexplicable uneasiness crawl down his back as he faced his rescuer. The soldiers of San-Mu were courageous, if lacking in human kindness. What had frightened the attacking guard?

He eyed the other. He saw a medium-sized man, clad in voluminous gray garments that were almost invisible in the gloom–saw a white face with regular, statuesque features. A black hollow sprang into existence within the white mask as a soft voice whispered, “You’d escape from the guards? NO need, for your rapier–I’m a friend.”