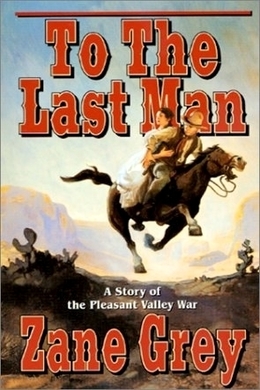 To the Last Man

A Story of the Pleasant Valley War

This is the classic story of a deadly feud between cattlemen and sheepherders in the Tonto Basin of Arizona in the years years of the 1800s that gave substance to one of the legendary conflicts of the West. This romance is true to Grey’s conception of the Pleasant Valley War and he bases it upon the setting he learned to know and love so well, upon the strange passions of primitive people, and upon his instinctive reaction to the facts and rumors he had gathered. Due to the age and scarcity of the original we reproduced, some pages may be spotty or faded. See other titles by this author available from Kessinger Publishing.

At the end of a dry, uphill ride over barren country Jean Isbel unpacked to camp at the edge of the cedars where a little rocky canyon green with willow and cottonwood, promised water and grass.

His animals were tired, especially the pack mule that had carried a heavy load; and with slow heave of relief they knelt and rolled in the dust. Jean experienced something of relief himself as he threw off his chaps. He had not been used to hot, dusty, glaring days on the barren lands. Stretching his long length beside a tiny rill of clear water that tinkled over the red stones, he drank thirstily. The water was cool, but it had an acrid taste–an alkali bite that he did not like. Not since he had left Oregon had he tasted clear, sweet, cold water; and he missed it just as he longed for the stately shady forests he had loved. This wild, endless Arizona land bade fair to earn his hatred.

By the time he had leisurely completed his tasks twilight had fallen and coyotes had begun their barking. Jean listened to the yelps and to the moan of the cool wind in the cedars with a sense of satisfaction that these lonely sounds were familiar. This cedar wood burned into a pretty fire and the smell of its smoke was newly pleasant.

“Reckon maybe I’ll learn to like Arizona,” he mused, half aloud. “But I’ve a hankerin’ for waterfalls an’ dark-green forests. Must be the Indian in me…. Anyway, dad needs me bad, an’ I reckon I’m here for keeps.”

Jean threw some cedar branches on the fire, in the light of which he opened his father’s letter, hoping by repeated reading to grasp more of its strange portent. It had been two months in reaching him, coming by traveler, by stage and train, and then by boat, and finally by stage again. Written in lead pencil on a leaf torn from an old ledger, it would have been hard to read even if the writing had been more legible.

“Dad’s writin’ was always bad, but I never saw it so shaky,” said Jean, thinking aloud.

Son Jean,–Come home. Here is your home and here your needed. When we left Oregon we all reckoned you would not be long behind. But its years now. I am growing old, son, and you was always my steadiest boy. Not that you ever was so dam steady. Only your wildness seemed more for the woods. You take after mother, and your brothers Bill and Guy take after me. That is the red and white of it. Your part Indian, Jean, and that Indian I reckon I am going to need bad. I am rich in cattle and horses. And my range here is the best I ever seen. Lately we have been losing stock. But that is not all nor so bad. Sheepmen have moved into the Tonto and are grazing down on Grass Vally. Cattlemen and sheepmen can never bide in this country. We have bad times ahead. Reckon I have more reasons to worry and need you, but you must wait to hear that by word of mouth. Whatever your doing, chuck it and rustle for Grass Vally so to make here by spring. I am asking you to take pains to pack in some guns and a lot of shells. And hide them in your outfit. If you meet anyone when your coming down into the Tonto, listen more than you talk. And last, son, dont let anything keep you in Oregon. Reckon you have a sweetheart, and if so fetch her along. With love from your dad,

Jean pondered over this letter. Judged by memory of his father, who had always been self-sufficient, it had been a surprise and somewhat of a shock. Weeks of travel and reflection had not helped him to grasp the meaning between the lines.

“Yes, dad’s growin’ old,” mused Jean, feeling a warmth and a sadness stir in him. “He must be ‘way over sixty. But he never looked old…. So he’s rich now an’ losin’ stock, an’ goin’ to be sheeped off his range. Dad could stand a lot of rustlin’, but not much from sheepmen.”