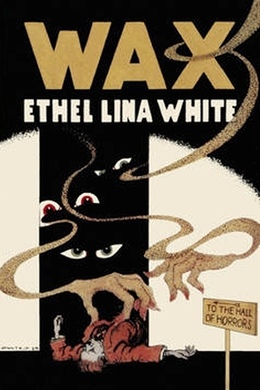 The residents of the British town of Riverpool are disturbed by a series of murders in the local waxworks museum. As tensions mount, local journalist Sonia Thompson determines to investigate - but when she spends the night alone at the museum, she soon finds horror stalking the exhibits. A classic crime thriller from the author of The Lady Vanishes.

As the Town Hall clock struck two, the porter of the Riverpool Waxwork Gallery stirred uneasily in bed.

“Nothing,” was the reply. “Only, I remember taking a candle with me into the Horrors, and I can’t rightly say as I took it out again.”

Instantly there was an upheaval under the quilt, followed by an eruption of blankets. Then an elephantine hump, silhouetted on the reflected light of the wall, told Ames that his wife was sitting up in bed.

“That Gallery’s our bread,” she declared. “Besides, think of my poor figures trapped in a fire. You get up, Ames, and make sure the candle’s out.”

“Oh, I doubted it. I remember. Lay down again.”

But Mrs. Ames had surged out of bed and was slipping into her shoes. Having achieved his object, her husband drew the blanket over his head. Salving his conscience by repeating, “I doubted it,” he went to sleep again.

With her tweed coat buttoned over her nightdress, and her hat, adorned with an eye veil, perched on top of her curlers, Mrs. Ames went out into the night. She was not nervous of the darkness, while the Gallery was only the length of a short street away.

Directly she turned the key in the great lock and pushed open the massive mahogany doors, she felt that she was really at home. She had brought her pocket-torch, for she knew that if she switched on the light, a policeman might notice the illumination and feel it his duty to investigate. And, as she was one of those free and fearless souls who strew the grass of public parks with chocolate paper and cigarette stumps, she had an instinctive distrust of the law.

She entered the Gallery, and then stood on the threshold—aware of a change. This was not the familiar place she knew so well.

It seemed to be full of people. Seen in the light from the street lamp, which streamed in through the high window, their faces were those of men and women of character and intelligence. They stood in groups as though in conversation, or sat apart in solitary reverie.

But they neither spoke nor moved.

When she had seen them last, a few hours ago, under the dim electric globes, they had been a collection of ordinary waxworks, representing conventional historical personages and Victorian celebrities. Only a few were in really good condition, while some were ancient, with blurred features and threadbare clothes.

But now, they were all restored to health and electric with life. Napoleon frowned as he planned a new campaign. Charles II. mistook her for an orange-girl and ogled her. Henry VIII. shook with silent laughter.

Mrs. Ames felt absurdly abashed by the transformation. She knew she had only to snap on the light to shatter the illusion. Restrained by the memory of the policeman, she did her best to put the figures back in their proper places.

“Hallo, dearies,” she called. “Mother’s popped in to see you.”

Her voice echoed queerly under the domed mahogany roof. She had a vague impression that the Waxworks resented her liberty, as she hurried towards the Hall of Horrors.

A crack of light which outlined its doors told her that her husband had been too optimistic about his memory. This smaller Gallery had not been wired, for it held no lurid attractions. She rushed inside, to see a guttering candle stuck upon the floor.

Although no damage had been done, her indignation swept away imagination. But after she had blown out the flame, she became dimly afraid of her surroundings.

There was no special reason for her to feel nervous. The Hall of Horrors housed only a small number of selected murderers, whom, normally, she despised. These figures were not spectacular, like her cherished Royalties. They wore dull coats and trousers, and could easily be mistaken for nonentities such as Gladstone and Tennyson.

But, as she threw her torch over them, a pinprick of light gleamed in each glassy eye, imparting a fiction of life. They seemed to be looking at her with intent and furtive speculation, as though she were the object of a private and peculiarly personal inventory.

Suddenly she remembered that she was among a company of—poisoners.

Although she was furious with herself for her weakness, her nerve crashed. It was in vain that she reminded herself that these were, in reality, her very own Waxworks. She treated them as her children. It was true that they were a neglected family, for she was an amiable sloven; but, occasionally, she brushed their clothes and hair, or cleaned their faces with a lick of spit.

Now, however, as she hurried down the Gallery, she felt that they had grown alien and aloof. They seemed to regard her with unfriendly eyes, as though she had interrupted some secret and exciting mystery.

They resented her presence. At this hour, the gallery belonged to Them.