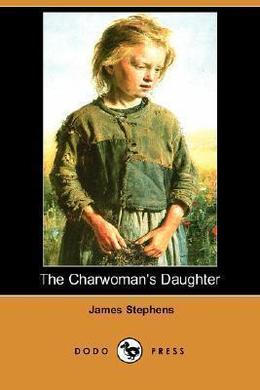 A strange wistful story of sixteen-year-old Mary, the only child of her fiercely protective, widowed mother. Mary and her mother live in a one-room tenement flat that is home to the rituals of their bitter love. By day her mother cleans the houses of the Dublin rich, while Mary makes observations as she walks through the city. The imaginitive richness of her insight makes the city come alive as a place that is both strange and wonderful, remote yet friendly. It is this sense of discovery and the bittersweet richness it brings with it that makes this such an unusual but compelling Dublin novel.–Dr. Patricia McManus

Mary Makebelieve lived with her mother in a small room at the very top of a big, dingy house in a Dublin back street. As long as she could remember she had lived in that top back room. She knew every crack in the ceiling, and they were numerous and of strange shapes. Every spot of mildew on the ancient wall-paper was familiar. She had, indeed, watched the growth of most from a grayish shade to a dark stain, from a spot to a great blob, and the holes in the skirting of the walls, out of which at nighttime the cockroaches came rattling, she knew also. There was but one window in the room, and when she wished to look out of it she had to push the window up, because the grime of many years had so encrusted the glass that it was of no more than the demi-semi-transparency of thin horn. When she did look there was nothing to see but a bulky array of chimney-pots crowning a next-door house, and these continually hurled jays of soot against her window; therefore, she did not care to look out often, for each time that she did so she was forced to wash herself, and as water had to be carried from the very bottom of the five-story house up hundreds and hundreds of stairs to her room, she disliked having to use too much water.

Her mother seldom washed at all. She held that washing was very unhealthy and took the natural gloss off the face, and that, moreover, soap either tightened the skin or made it wrinkle. Her own face was very tight in some places and very loose in others, and Mary Makebelieve often thought that the tight places were spots which her mother used to wash when she was young, and the loose parts were those which had never been washed at all. She thought that she would prefer to be either loose all over her face or tight all over it, and, therefore, when she washed she did it thoroughly, and when she abstained she allowed of no compromise.

Her mother’s face was the color of old, old ivory. Her nose was like a great strong beak, and on it the skin was stretched very tightly, so that her nose shone dully when the candle was lit. Her eyes were big and as black as pools of ink and as bright as the eyes of a bird. Her hair also was black, it was as smooth as the finest silk, and when unloosened it hung straightly down, shining about her ivory face. Her lips were thin and scarcely colored at all, and her hands were sharp, quick hands, seeming all knuckle when she closed them and all fingers when they were opened again.

Mary Makebelieve loved her mother very dearly, and her mother returned her affection with an overwhelming passion that sometimes surged into physically painful caresses. When her mother hugged her for any length of time she soon wept, rocking herself and her daughter to and fro, and her clutch became then so frantic that poor Mary Makebelieve found it difficult to draw her breath; but she would not for the world have disturbed the career of her mother’s love. Indeed, she found some pleasure in the fierceness of those caresses, and welcomed the pain far more than she reprobated it.

Her mother went out early every morning to work, and seldom returned home until late at night. She was a charwoman, and her work was to scrub out rooms and wash down staircases. She also did cooking when she was asked, and needlework when she got any to do. She had made exquisite dresses which were worn by beautiful young girls at balls and picnics, and fine, white shirts that great gentlemen wore when they were dining, and fanciful waistcoats for gay young men, and silk stockings for dancing in–but that was a long time ago, because these beautiful things used to make her very angry when they were taken from her, so that she cursed the people who came to take them away and sometimes tore up the dresses and danced on them and screamed.