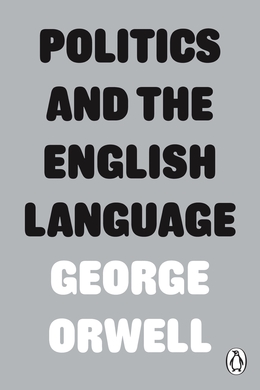 Politics and the English Language

Politics and the English Language is widely considered Orwell’s most important essay on style. Style, for Orwell, was never simply a question of aesthetics; it was always inextricably linked to politics and to truth. ‘All issues are political issues, and politics itself is a mass of lies, evasions, folly, hatred and schizophrenia.When the general atmosphere is bad, language must suffer’. Language is a political issue, and slovenly use of language and cliches make it easier for those in power to deliberately use misleading language to hide unpleasant political facts. Bad English, he believed, was a vehicle for oppressive ideology, and it is no accident that it was written after the close of World War II.

Most people who bother with the matter at all would admit that the English language is in a bad way, but it is generally assumed that we cannot by conscious action do anything about it. Our civilization is decadent, and our language–so the argument runs–must inevitably share in the general collapse. It follows that any struggle against the abuse of language is a sentimental archaism, like preferring candles to electric light or hansom cabs to aeroplanes. Underneath this lies the half-conscious belief that language is a natural growth and not an instrument which we shape for our own purposes.

Now, it is clear that the decline of a language must ultimately have political and economic causes: it is not due simply to the bad influence of this or that individual writer. But an effect can become a cause, reinforcing the original cause and producing the same effect in an intensified form, and so on indefinitely. A man may take to drink because he feels himself to be a failure, and then fail all the more completely because he drinks. It is rather the same thing that is happening to the English language. It becomes ugly and inaccurate because our thoughts are foolish, but the slovenliness of our language makes it easier for us to have foolish thoughts. The point is that the process is reversible. Modern English, especially written English, is full of bad habits which spread by imitation and which can be avoided if one is willing to take the necessary trouble. If one gets rid of these habits one can think more clearly, and to think clearly is a necessary first step towards political regeneration: so that the fight against bad English is not frivolous and is not the exclusive concern of professional writers. I will come back to this presently, and I hope that by that time the meaning of what I have said here will have become clearer. Meanwhile, here are five specimens of the English language as it is now habitually written.

These five passages have not been picked out because they are especially bad–I could have quoted far worse if I had chosen–but because they illustrate various of the mental vices from which we now suffer. They are a little below the average, but are fairly representative samples. I number them so that I can refer back to them when necessary:

(1) I am not, indeed, sure whether it is not true to say that the Milton who once seemed not unlike a seventeenth-century Shelley had not become, out of an experience ever more bitter in each year, more alien (sic) to the founder of that Jesuit sect which nothing could induce him to tolerate.

(2) Above all, we cannot play ducks and drakes with a native battery of idioms which prescribes such egregious collocations of vocables as the Basic put up with or tolerate or put at a loss or bewilder.

(3) On the one side we have the free personality; by definition it is not neurotic, for it has neither conflict nor dream. Its desires, such as they are, are transparent, for they are just what institutional approval keeps in the forefront of consciousness; another institutional pattern would alter their number and intensity; there is little in them that is natural, irreducible, or culturally dangerous. But on the other side, the social bond itself is nothing but the mutual reflection of these self-secure integrities. Recall the definition of love. Is not this the very picture of a small academic? Where is there a place in this hall of mirrors for either personality or fraternity?

(4) All the “best people” from the gentlemen’s clubs, and all the frantic fascist captains, united in common hatred of Socialism and bestial horror of the rising tide of the mass revolutionary movement, have turned to acts of provocation, to foul incendiarism, to medieval legends of poisoned wells, to legalize their own destruction of proletarian organizations, and rouse the agitated petty-bourgeoisie to chauvinistic fervor on behalf of the fight against the revolutionary way out of the crisis.