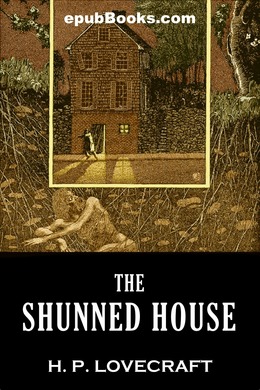 For many years the protagonist and his uncle, Dr. Elihu Whipple, have nurtured a fascination with an old, abandoned house on Benefit Street. Dr. Whipple has made extensive records tracking the mysterious, yet apparently coincidental sickness and death of many who have lived in the house for over one hundred years. They are also puzzled by the strange weeds growing in the yard, as well as the unexplained foul smell and whitish, phosphorescent fungi growing in the cellar. After the protagonist discovers a strange, yellowish vapour in the basement, which seems to be coupled with a moldy outline of a huddled human form on the floor, he and his uncle decide to spend the night in the house, investigating the possibility of some supernatural force. They set up cots and chairs in the cellar, arm themselves with military flamethrowers, and outfit a modified Crookes tube in the hopes of destroying any supernatural presence they might find.

From even the greatest of horrors irony is seldom absent. Sometimes it enters directly into the composition of the events, while sometimes it relates only to their fortuitous position among persons and places. The latter sort is splendidly exemplified by a case in the ancient city of Providence, where in the late forties Edgar Allan Poe used to sojourn often during his unsuccessful wooing of the gifted poetess, Mrs. Whitman. Poe generally stopped at the Mansion House in Benefit Street–the renamed Golden Ball Inn whose roof has sheltered Washington, Jefferson, and Lafayette–and his favorite walk led northward along the same street to Mrs. Whitman’s home and the neighboring hillside churchyard of St. John’s, whose hidden expanse of Eighteenth Century gravestones had for him a peculiar fascination.

Now the irony is this. In this walk, so many times repeated, the world’s greatest master of the terrible and the bizarre was obliged to pass a particular house on the eastern side of the street; a dingy, antiquated structure perched on the abruptly rising side hill, with a great unkempt yard dating from a time when the region was partly open country. It does not appear that he ever wrote or spoke of it, nor is there any evidence that he even noticed it. And yet that house, to the two persons in possession of certain information, equals or outranks in horror the wildest fantasy of the genius who so often passed it unknowingly, and stands starkly leering as a symbol of all that is unutterably hideous.

The house was–and for that matter still is–of a kind to attract the attention of the curious. Originally a farm or semi-farm building, it followed the average New England colonial lines of the middle Eighteenth Century–the prosperous peaked-roof sort, with two stories and dormerless attic, and with the Georgian doorway and interior panelling dictated by the progress of taste at that time. It faced south, with one gable end buried to the lower windows in the eastward rising hill, and the other exposed to the foundations toward the street. Its construction, over a century and a half ago, had followed the grading and straightening of the road in that especial vicinity; for Benefit Street–at first called Back Street–was laid out as a lane winding amongst the graveyards of the first settlers, and straightened only when the removal of the bodies to the North Burial Ground made it decently possible to cut through the old family plots.

At the start, the western wall had lain some twenty feet up a precipitous lawn from the roadway; but a widening of the street at about the time of the Revolution sheared off most of the intervening space, exposing the foundations so that a brick basement wall had to be made, giving the deep cellar a street frontage with door and one window above ground, close to the new line of public travel. When the sidewalk was laid out a century ago the last of the intervening space was removed; and Poe in his walks must have seen only a sheer ascent of dull gray brick flush with the sidewalk and surmounted at a height of ten feet by the antique shingled bulk of the house proper.

The farm-like ground extended back very deeply up the hill, almost to Wheaton Street. The space south of the house, abutting on Benefit Street, was of course greatly above the existing sidewalk level, forming a terrace bounded by a high bank wall of damp, mossy stone pierced by a steep flight of narrow steps which led inward between canyon-like surfaces to the upper region of mangy lawn, rheumy brick walks, and neglected gardens whose dismantled cement urns, rusted kettles fallen from tripods of knotty sticks, and similar paraphernalia set off the weather-beaten front door with its broken fanlight, rotting Ionic pilasters, and wormy triangular pediment.

What I heard in my youth about the shunned house was merely that people died there in alarmingly great numbers. That, I was told, was why the original owners had moved out some twenty years after building the place. It was plainly unhealthy, perhaps because of the dampness and fungous growths in the cellar, the general sickish smell, the drafts of the hallways, or the quality of the well and pump water. These things were bad enough, and these were all that gained belief among the persons whom I knew. Only the notebooks of my antiquarian uncle, Doctor Elihu Whipple, revealed to me at length the darker, vaguer surmises which formed an undercurrent of folklore among old-time servants and humble folk; surmises which never travelled far, and which were largely forgotten when Providence grew to be a metropolis with a shifting modern population.