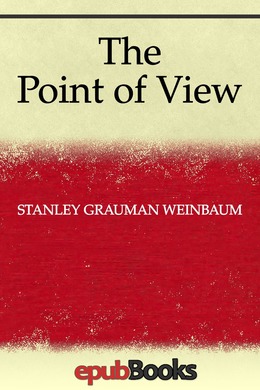 The Point of View

The, self-aclaimed “great”, Haskel van Manderpootz has been “cheated” out of the coveted Morrell Award and unable to accept of life of modesty and in the discussion of varying points of view, van Manderpootz sets in motion his next great experiment. One of science fiction’s classic duos – wacky inventor Professor Haskel van Manderpootz and dashing man-about-town Dixon Wells – team up again in Stanley Weinbaum’s short story The Point of View. In this tale, the pair are perfecting a gadget that will allow users to briefly view the world from another person’s point of view.

“I am too modest!” snapped the great Haskel van Manderpootz, pacing irritably about the limited area of his private laboratory, glaring at me the while. “That is the trouble. I undervalue my own achievements, and thereby permit petty imitators like Corveille to influence the committee and win the Morell prize.”

“But,” I said soothingly, “you’ve won the Morell physics award half a dozen times, professor. They can’t very well give it to you every year.”

“Why not, since it is plain that I deserve it?” bristled the professor. “Understand, Dixon, that I do not regret my modesty, even though it permits conceited fools like Corveille, who have infinitely less reason than I for conceit, to win awards that mean nothing save prizes for successful bragging. Bah! To grant an award for research along such obvious lines that I neglected to mention them, thinking that even a Morell judge would appreciate their obviousness! Research on the psychon, eh! Who discovered the psychon? Who but van Manderpootz?”

“Wasn’t that what you got last year’s award for?” I asked consolingly. “And after all, isn’t this modesty, this lack of jealousy on your part, a symbol of greatness of character?”

“True–true!” said the great van Manderpootz, mollified. “Had such an affront been committed against a lesser man than myself, he would doubtless have entered a bitter complaint against the judges. But not I. Anyway, I know from experience that it wouldn’t do any good. And besides, despite his greatness, van Manderpootz is as modest and shrinking as a violet.” At this point he paused, and his broad red face tried to look violet-like.

I suppressed a smile. I knew the eccentric genius of old, from the days when I had been Dixon Wells, undergraduate student of engineering, and had taken a course in Newer Physics (that is, in Relativity) under the famous professor. For some unguessable reason, he had taken a fancy to me, and as a result, I had been involved in several of his experiments since graduation. There was the affair of the subjunctivisor, for instance, and also that of the idealizator; in the first of these episodes I had suffered the indignity of falling in love with a girl two weeks after she was apparently dead, and in the second, the equal or greater indignity of falling in love with a girl who didn’t exist, never had existed, and never would exist–in other words, with an ideal. Perhaps I’m a little susceptible to feminine charms, or rather, perhaps I used to be, for since the disaster of the idealizator, I have grimly relegated such follies to the past, much to the disgust of various ‘vision entertainers, singers, dancers, and the like.

So of late I had been spending my days very seriously, trying wholeheartedly to get to the office on time just once, so that I could refer to it next time my father accused me of never getting anywhere on time. I hadn’t succeeded yet, but fortunately the N. J. Wells Corporation was wealthy enough to survive even without the full-time services of Dixon Wells, or should I say even with them? Anyway, I’m sure my father preferred to have me late in the morning after an evening with van Manderpootz than after one with Tips Alva or Whimsy White, or one of the numerous others of the ladies of the ‘vision screen. Even in the twenty-first century, he retained a lot of old-fashioned ideas.

Van Manderpootz had ceased to remember that he was as modest and shrinking as a violet. “It has just occurred to me,” he announced impressively, “that years have character much as humans have. This year, 2015, will be remembered in history as a very stupid year, in which the Morell prize was given to a nincompoop. Last year, on the other hand, was a very intelligent year, a jewel in the crown of civilization. Not only was the Morell prize given to van Manderpootz, but I announced my discrete field theory in that year, and the University unveiled Gogli’s statue of me as well.” He sighed. “Yes, a very intelligent year! What do you think?”

“It depends on how you look at it,” I responded glumly. “I didn’t enjoy it so much, what with Joanna Caldwell and Denise d’Agrion, and your infernal experiments. It’s all in the point of view.”

The professor snorted. “Infernal experiments, eh! Point of view! Of course it’s all in the point of view. Even Einstein’s simple little synthesis was enough to prove that. If the whole world could adopt an intelligent and admirable point of view–that of van Manderpootz, for instance–all troubles would be over. If it were possible–” He paused, and an expression of amazed wonder spread over his ruddy face.

“Matter? I am astonished! The astounding depths of genius awe me. I am overwhelmed with admiration at the incalculable mysteries of a great mind.”