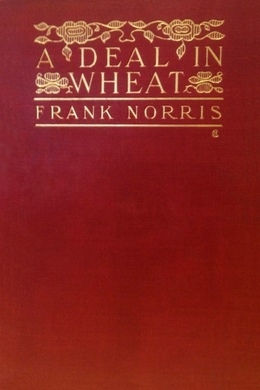 A Deal in Wheat

And Other Stories of the New and Old West

The time was late in the summer the place a ranch in southwestern Kansas and Lewiston and his wife were two of a vast population of farmers wheat growers who at that moment were passing through a crisis-a crisis that at any moment might culminate in tragedy. Wheat was down to sixty-six.

As Sam Lewiston backed the horse into the shafts of his backboard and began hitching the tugs to the whiffletree, his wife came out from the kitchen door of the house and drew near, and stood for some time at the horse’s head, her arms folded and her apron rolled around them. For a long moment neither spoke. They had talked over the situation so long and so comprehensively the night before that there seemed to be nothing more to say.

The time was late in the summer, the place a ranch in southwestern Kansas, and Lewiston and his wife were two of a vast population of farmers, wheat growers, who at that moment were passing through a crisis–a crisis that at any moment might culminate in tragedy. Wheat was down to sixty-six.

“Well,” she hazarded, looking vaguely out across the ranch toward the horizon, leagues distant; “well, Sam, there’s always that offer of brother Joe’s. We can quit–and go to Chicago–if the worst comes.”

“And give up!” exclaimed Lewiston, running the lines through the torets. “Leave the ranch! Give up! After all these years!”

His wife made no reply for the moment. Lewiston climbed into the buckboard and gathered up the lines. “Well, here goes for the last try, Emmie,” he said. “Good-by, girl. Maybe things will look better in town to-day.”

“Maybe,” she said gravely. She kissed her husband good-by and stood for some time looking after the buckboard traveling toward the town in a moving pillar of dust.

When he reached town, Lewiston tied the horse to the iron railing in front of the Odd Fellows’ Hall, the ground floor of which was occupied by the post-office, and went across the street and up the stairway of a building of brick and granite–quite the most pretentious structure of the town–and knocked at a door upon the first landing. The door was furnished with a pane of frosted glass, on which, in gold letters, was inscribed, “Bridges & Co., Grain Dealers.”

Bridges himself, a middle-aged man who wore a velvet skull-cap and who was smoking a Pittsburg stogie, met the farmer at the counter and the two exchanged perfunctory greetings.

“Well, Lewiston,” said the other, “I can’t take that wheat of yours at any better than sixty-two.”

“It’s the Chicago price that does it, Lewiston. Truslow is bearing the stuff for all he’s worth. It’s Truslow and the bear clique that stick the knife into us. The price broke again this morning. We’ve just got a wire.”

“Good heavens,” murmured Lewiston, looking vaguely from side to side. “That–that ruins me. I can’t carry my grain any longer–what with storage charges and–and–Bridges, I don’t see just how I’m going to make out. Sixty-two cents a bushel! Why, man, what with this and with that it’s cost me nearly a dollar a bushel to raise that wheat, and now Truslow–”

He turned away abruptly with a quick gesture of infinite discouragement.

He went down the stairs, and making his way to where his buckboard was hitched, got in, and, with eyes vacant, the reins slipping and sliding in his limp, half-open hands, drove slowly back to the ranch. His wife had seen him coming, and met him as he drew up before the barn.

“Emmie,” he said as he got out of the buckboard, laying his arm across her shoulder, “Emmie, I guess we’ll take up with Joe’s offer. We’ll go to Chicago. We’re cleaned out!”

“Now, Mr. Gates, if you will sign for Mr. Truslow I guess that’ll be all,” remarked Hornung when he had finished reading.

Hornung affixed his signature to the two documents and passed them over to Gates, who signed for his principal and client, Truslow–or, as he had been called ever since he had gone into the fight against Hornung’s corner–the Great Bear. Hornung’s secretary was called in and witnessed the signatures, and Gates thrust the contract into his Gladstone bag and stood up, smoothing his hat.

“You will deliver the warehouse receipts for the grain,” began Gates.

“I’ll send a messenger to Truslow’s office before noon,” interrupted Hornung. “You can pay by certified check through the Illinois Trust people.”