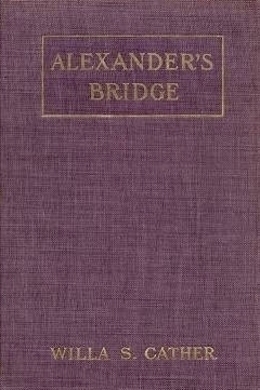 Bartley Alexander, an engineer famous for the audacious structure of his North American bridges, is at the height of his reputation. He has a distinguished and beautiful wife and an enviable Boston home. Then, on a trip to London, he has a chance encounter with an Irish actress he once loved. When their affair re-ignites, Alexander finds himself caught in a tug of emotions—between his feelings for wife, who has supported his career with understanding and strength, and Hilda, whose impulsiveness and generosity restore to him the passion and energy of his youth. Coinciding with this personal dilemma are ominous signs of strain in his professional life. In this, her first novel, originally published in 1912, Willa Cather skillfully explores the struggle between opposing sides of the self, a facility that was to become a hallmark of her craft.

Late one brilliant April afternoon Professor Lucius Wilson stood at the head of Chestnut Street, looking about him with the pleased air of a man of taste who does not very often get to Boston. He had lived there as a student, but for twenty years and more, since he had been Professor of Philosophy in a Western university, he had seldom come East except to take a steamer for some foreign port. Wilson was standing quite still, contemplating with a whimsical smile the slanting street, with its worn paving, its irregular, gravely colored houses, and the row of naked trees on which the thin sunlight was still shining. The gleam of the river at the foot of the hill made him blink a little, not so much because it was too bright as because he found it so pleasant. The few passers–by glanced at him unconcernedly, and even the children who hurried along with their school–bags under their arms seemed to find it perfectly natural that a tall brown gentleman should be standing there, looking up through his glasses at the gray housetops.

The sun sank rapidly; the silvery light had faded from the bare boughs and the watery twilight was setting in when Wilson at last walked down the hill, descending into cooler and cooler depths of grayish shadow. His nostril, long unused to it, was quick to detect the smell of wood smoke in the air, blended with the odor of moist spring earth and the saltiness that came up the river with the tide. He crossed Charles Street between jangling street cars and shelving lumber drays, and after a moment of uncertainty wound into Brimmer Street. The street was quiet, deserted, and hung with a thin bluish haze. He had already fixed his sharp eye upon the house which he reasoned should be his objective point, when he noticed a woman approaching rapidly from the opposite direction. Always an interested observer of women, Wilson would have slackened his pace anywhere to follow this one with his impersonal, appreciative glance. She was a person of distinction he saw at once, and, moreover, very handsome. She was tall, carried her beautiful head proudly, and moved with ease and certainty. One immediately took for granted the costly privileges and fine spaces that must lie in the background from which such a figure could emerge with this rapid and elegant gait. Wilson noted her dress, too,—for, in his way, he had an eye for such things,—particularly her brown furs and her hat. He got a blurred impression of her fine color, the violets she wore, her white gloves, and, curiously enough, of her veil, as she turned up a flight of steps in front of him and disappeared.

Wilson was able to enjoy lovely things that passed him on the wing as completely and deliberately as if they had been dug–up marvels, long anticipated, and definitely fixed at the end of a railway journey. For a few pleasurable seconds he quite forgot where he was going, and only after the door had closed behind her did he realize that the young woman had entered the house to which he had directed his trunk from the South Station that morning. He hesitated a moment before mounting the steps. “Can that,” he murmured in amazement,—”can that possibly have been Mrs. Alexander?”