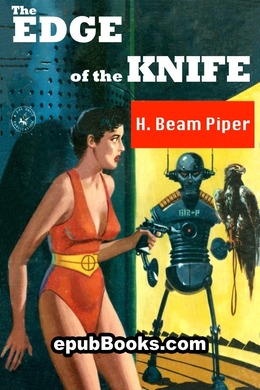 The Edge of the Knife

Part of this prolific author’s popular Terra-Human Future History series, this tale takes place just prior to the devastating world war that occurs in 1973, wiping out much of humanity and leading to the ascendance of a new world order. The story focuses on a protagonist who is plagued by brief glimpses of the future. Many fans regard this story as a thematic touchstone that yokes together much of Piper’s oeuvre.

Chalmers stopped talking abruptly, warned by the sudden attentiveness of the class in front of him. They were all staring; even Guellick, in the fourth row, was almost half awake. Then one of them, taking his silence as an invitation to questions found his voice.

“You say Khalid ib’n Hussein’s been assassinated?” he asked incredulously. “When did that happen?”

“In 1973, at Basra.” There was a touch of impatience in his voice; surely they ought to know that much. “He was shot, while leaving the Parliament Building, by an Egyptian Arab named Mohammed Noureed, with an old U. S. Army M3 submachine-gun. Noureed killed two of Khalid’s guards and wounded another before he was overpowered. He was lynched on the spot by the crowd; stoned to death. Ostensibly, he and his accomplices were religious fanatics; however, there can be no doubt whatever that the murder was inspired, at least indirectly, by the Eastern Axis.”

The class stirred like a grain-field in the wind. Some looked at him in blank amazement; some were hastily averting faces red with poorly suppressed laughter. For a moment he was puzzled, and then realization hit him like a blow in the stomach-pit. He’d forgotten, again.

“I didn’t see anything in the papers about it,” one boy was saying.

“The newscast, last evening, said Khalid was in Ankara, talking to the President of Turkey,” another offered.

“Professor Chalmers, would you tell us just what effect Khalid’s death had upon the Islamic Caliphate and the Middle Eastern situation in general?” a third voice asked with exaggerated solemnity. That was Kendrick, the class humorist; the question was pure baiting.

“Well, Mr. Kendrick, I’m afraid it’s a little too early to assess the full results of a thing like that, if they can ever be fully assessed. For instance, who, in 1911, could have predicted all the consequences of the pistol-shot at Sarajevo? Who, even today, can guess what the history of the world would have been had Zangarra not missed Franklin Roosevelt in 1932? There’s always that if.”

He went on talking safe generalities as he glanced covertly at his watch. Only five minutes to the end of the period; thank heaven he hadn’t made that slip at the beginning of the class. “For instance, tomorrow, when we take up the events in India from the First World War to the end of British rule, we will be largely concerned with another victim of the assassin’s bullet, Mohandas K. Gandhi. You may ask yourselves, then, by how much that bullet altered the history of the Indian sub-continent. A word of warning, however: The events we will be discussing will be either contemporary with or prior to what was discussed today. I hope that you’re all keeping your notes properly dated. It’s always easy to become confused in matters of chronology.”

He wished, too late, that he hadn’t said that. It pointed up the very thing he was trying to play down, and raised a general laugh.

As soon as the room was empty, he hastened to his desk, snatched pencil and notepad. This had been a bad one, the worst yet; he hadn’t heard the end of it by any means. He couldn’t waste thought on that now, though. This was all new and important; it had welled up suddenly and without warning into his conscious mind, and he must get it down in notes before the “memory”–even mentally, he always put that word into quotes–was lost. He was still scribbling furiously when the instructor who would use the room for the next period entered, followed by a few of his students. Chalmers finished, crammed the notes into his pocket, and went out into the hall.

Most of his own Modern History IV class had left the building and were on their way across the campus for science classes. A few, however, were joining groups for other classes here in Prescott Hall, and in every group, they were the center of interest. Sometimes, when they saw him, they would fall silent until he had passed; sometimes they didn’t, and he caught snatches of conversation.

“Oh, brother! Did Chalmers really blow his jets this time!” one voice was saying.

“Bet he won’t be around next year.”

Another quartet, with their heads together, were talking more seriously.

“Well, I’m not majoring in History, myself, but I think it’s an outrage that some people’s diplomas are going to depend on grades given by a lunatic!”

“Mine will, and I’m not going to stand for it. My old man’s president of the Alumni Association, and….”