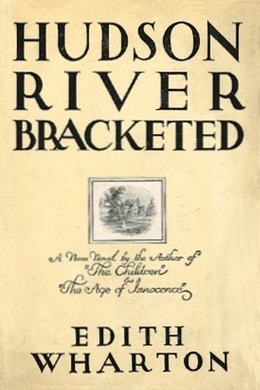 One of Edith Wharton’s unjustly neglected novels, Hudson River Bracketed features two strong protagonists - Vance Weston and Halo Spear. The former is an undereducated young man who arrives in New York with a keen desire to write. Halo Spear is a brilliant, accomplished young woman who introduces Vance to literature and they form a deep bond, which flourishes and endures despite the hardships of Vance’s life, the disappointments of Halo’s - and their respective marriages.

By the time he was nineteen Vance Weston had graduated from the College of Euphoria, Illinois, where his parents then lived, had spent a week in Chicago, invented a new religion, and edited for a few months a college magazine called Getting There, to which he had contributed several love poems and a series of iconoclastic essays. He had also been engaged for a whole week to the inspirer of the poems, a girl several years older than himself called Floss Delaney, who was the somewhat blown-upon daughter of an unsuccessful real estate man living in a dejected outskirt of the town.

Having soared to these heights, and plumbed these depths, it now remained to young Weston to fix upon the uses to which his varied aptitudes and experiences could most advantageously be put.

Of all the events so far befalling him, none seemed to Vance Weston as important as having invented a new religion. He had been born into a world in which everything had been, or was being, renovated, and it struck him as an anomaly that all the religions he had heard of had been in existence ever since he could remember; that is, at least sixteen years. This seemed to him the more unaccountable because religion, of one sort or another, seemed to play a considerable, if rather spasmodic or intermittent, part in the lives of most of the people he knew, and because, from the first dawn of consciousness, he had heard everybody adjuring everybody else not to get into a rut, but to go ahead with the times, as behoved all good Americans.

The evolution of his own family was in its main lines that of most of the families he had known. Since the time of Mrs. Weston’s marriage, when Grandma was teaching school at Pruneville, Nebraska, and the whole family depended on her earnings, till now, when she and Grandfather took their ease in an eight-room Colonial cottage in a suburb of Euphoria, and people came from as far as Chicago to consult Mr. Weston about real estate matters, the family curve had been continually upward. Lorin Weston, who had wandered out to Pruneville to try and pick up a job on the local newspaper, had immediately seen the real estate possibilities of that lamentable community, had put his last penny into a bit of swampy land near the future railway station, got out at a big rise when the railway came, and again plumped his all on another lot of land near where his mother-in-law had found out that the new high school was to be built. Then there had come a stagnant period in the development of Pruneville, and Mr. Weston had moved his wife and young family to Hallelujah, Mo., where he had repeated the same experiment with increasing profit. While he was there, a real estate man from Advance came over to take a look round, talked to Weston about Advance, and awakened his curiosity. To Advance the family went, compensated by a bigger and better house for the expense of having to leave Hallelujah. At Advance the Weston son and heir was born, and named after his birthplace, which had deserved well of Mr. Weston, since he was able, when Vance was nine or ten, to leave there for Euphoria, buy up nearly the whole of the Pig Lane side of the town, turn it into the Mapledale suburb, and build himself a house with lawn, garage, sleeping porch and sun parlour, which was photographed for the architectural papers, and made Mrs. Weston the envy of the Alsop Avenue church sewing circle. Even Grandma Scrimser, who had never been much of a hand at making or keeping money, and was what the minister of the Alsop Avenue church called “idealistic,” did not question the importance of material prosperity, or the value of Mr. Weston’s business “brightness,” and somewhere in the big lumber room of her mind had found a point where otherworldliness and “pep” lay down together in amity.

This being so–and such phrases as “back number,” “down and out,” “out of the running,” and the like having never been used in young Vance’s hearing save in a pejorative sense–he wondered how it was that the enlightened millions, with whom it was a sign of “pep” and prosperity to go in for almost annual turnovers in real estate, stocks, automobiles, wives and husbands, were content to put up year after year with the same religion, or religions rather, since nearly everybody he knew had a different one.