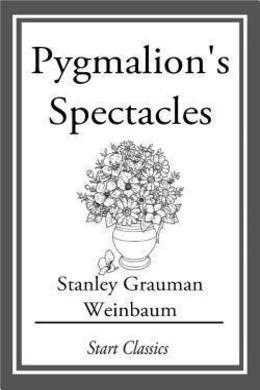 Dan Burke steps out of a stuffy New York City party hoping to get some air and peace in Central Park, but instead he meets a gnomelike man who asks him, “But what is reality?”. Sci-fi luminary Stanley G. Weinbaum first broke through with the hugely influential story A Martian Odyssey, one of the first to depict an alien being in a somewhat sympathetic light. The short tale Pygmalion’s Spectacles is no less innovative: it centers around the implications of a technology that’s surprisingly close to what we now call virtual reality.

“But what is reality?” asked the gnomelike man. He gestured at the tall banks of buildings that loomed around Central Park, with their countless windows glowing like the cave fires of a city of Cro-Magnon people. “All is dream, all is illusion; I am your vision as you are mine.”

Dan Burke, struggling for clarity of thought through the fumes of liquor, stared without comprehension at the tiny figure of his companion. He began to regret the impulse that had driven him to leave the party to seek fresh air in the park, and to fall by chance into the company of this diminutive old madman. But he had needed escape; this was one party too many, and not even the presence of Claire with her trim ankles could hold him there. He felt an angry desire to go home–not to his hotel, but home to Chicago and to the comparative peace of the Board of Trade. But he was leaving tomorrow anyway.

“Or so,” concluded the other, “says the philosopher Berkeley.”

“Berkeley?” echoed Dan. His head was clearing; memories of a Sophomore course in Elementary Philosophy drifted back. “Bishop Berkeley, eh?”

“You know him, then? The philosopher of Idealism–no?–the one who argues that we do not see, feel, hear, taste the object, but that we have only the sensation of seeing, feeling, hearing, tasting.”

“Hah! But sensations are mental phenomena. They exist in our minds. How, then, do we know that the objects themselves do not exist only in our minds?” He waved again at the light-flecked buildings. “You do not see that wall of masonry; you perceive only a sensation, a feeling of sight. The rest you interpret.”

Dan laughed. “Of course nobody knows anything. You just get what information you can through the windows of your five senses, and then make your guesses. When they’re wrong, you pay the penalty.” His mind was clear now save for a mild headache. “Listen,” he said suddenly. “You can argue a reality away to an illusion; that’s easy. But if your friend Berkeley is right, why can’t you take a dream and make it real? If it works one way, it must work the other.”

The beard waggled; elf-bright eyes glittered queerly at him. “All artists do that,” said the old man softly. Dan felt that something more quivered on the verge of utterance.

“That’s an evasion,” he grunted. “Anybody can tell the difference between a picture and the real thing, or between a movie and life.”

“But,” whispered the other, “the realer the better, no? And if one could make a–a movie–very real indeed, what would you say then?”

The eyes glittered strangely again. “I can!” he whispered. “I did!”

“Made real a dream.” The voice turned angry. “Fools! I bring it here to sell to Westman, the camera people, and what do they say? ‘It isn’t clear. Only one person can use it at a time. It’s too expensive.’ Fools! Fools!”

“Listen! I’m Albert Ludwig–Professor Ludwig.” As Dan was silent, he continued, “It means nothing to you, eh? But listen–a movie that gives one sight and sound. Suppose now I add taste, smell, even touch, if your interest is taken by the story. Suppose I make it so that you are in the story, you speak to the shadows, and the shadows reply, and instead of being on a screen, the story is all about you, and you are in it. Would that be to make real a dream?”

“How the devil could you do that?”

“How? How? But simply! First my liquid positive, then my magic spectacles. I photograph the story in a liquid with light-sensitive chromates. I build up a complex solution–do you see? I add taste chemically and sound electrically. And when the story is recorded, then I put the solution in my spectacle–my movie projector. I electrolyze the solution, break it down; the older chromates go first, and out comes the story, sight, sound, smell, taste–all!”

“If your interest is taken, your mind supplies that.” Eagerness crept into his voice. “You will look at it, Mr.—-?”

“Burke,” said Dan. “A swindle!” he thought. Then a spark of recklessness glowed out of the vanishing fumes of alcohol. “Why not?” he grunted.

He rose; Ludwig, standing, came scarcely to his shoulder. A queer gnomelike old man, Dan thought as he followed him across the park and into one of the scores of apartment hotels in the vicinity.